The best weight-loss drug in history has been approved by FDA. The monthly cost is about US$1,300/month and weight loss is 20%

The best weight-loss drug in history has been approved by FDA.  According to statistics from the World Health Organization (WHO), nearly 2 billion people are overweight or obese in the world. From 1975 to 2016, the global obesity rate has nearly tripled. Every year, overweight or obesity causes 2.8 million deaths.

In fact, obesity is not only a feature, but also a disease. Obese people not only have inconvenience in life and decreased exercise capacity, but are also more susceptible to metabolic diseases and cardiovascular and cerebrovascular diseases. In addition, many studies have shown that obesity is associated with more than ten types of cancer The increased risk of disease is related to the decrease of prognosis and survival rate.

The most effective way to lose weight is exercise + diet, but most people who lose weight find it difficult to stick to it. Therefore, many people hope to achieve rapid weight loss through drugs. However, the current weight loss drug market either has poor results or obvious negative effects. .

But this situation has now been changed. On Friday, the US Food and Drug Administration (FDA) approved Novo Nordisk’s semaglutide (semaglutide) anti-obesity drug to be marketed under the trade name wegovy. Semaglutide has an outstanding weight-loss effect and is evaluated as the first time that humans have achieved weight-loss effects that could only be achieved by surgery before using drugs.

The drug was originally used to treat diabetes. It is a structural analogue of human glucagon-like peptide 1 (GLP-1), which can mimic its effect, reduce hunger, reduce diet, and reduce calorie intake. Therefore, the effect is outstanding in terms of weight loss. The results of the phase 3 clinical trial showed that participants lost an average of 15.3 kg.

What is the weight loss effect of semaglutide? Let’s take a look at the results of its phase 3 clinical trial.

On February 10, 2021, the top international medical journal New England Journal of Medicine (NEJM) published a global large-scale clinical trial led by a research team from University College London, involving 1961 people in 16 countries around the world. The results of the trial showed The new weight-loss drug semaglutide (semaglutide) is effective, and the participants in the clinical trial lost an average of 15.3 kilograms.

More importantly, people who lose weight after taking the new weight loss drug semaglutide have reduced risk factors for heart disease and diabetes such as waist circumference, blood lipids, blood sugar, and blood pressure, and their overall quality of life has also been improved. 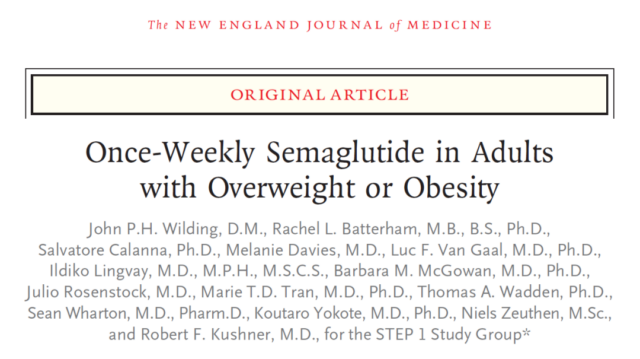 Human glucagon-like peptide 1 (GLP-1), a brain-gut peptide secreted by human ileal endocrine cells, is released into the blood from the intestine after a meal, which can reduce hunger and increase satiety.

Semaglutide (semaglutide), developed by Novo Nordisk, is a structural analogue of human glucagon-like peptide 1 (GLP-1) that can mimic its effects and has been approved for the treatment of type 2 diabetes.

Semaglutide (semaglutide) can reduce hunger, reduce diet, and reduce calorie intake, so it is considered to be used to treat obesity.

This clinical trial called the therapeutic effect of semaglutide in obese patients (STEP) has passed phase 1 and phase 2 clinical trials, but the safety of the 2.4 mg dose still needs to be evaluated.

Participants received a subcutaneous injection of 2.4 mg of semaglutide (or placebo) per week, which is similar to the way that diabetic patients inject insulin. Overall, 94.3% of the participants completed the 68-week study beginning in the fall of 2018. Participants received face-to-face or telephone consultation and guidance from a registered dietitian every four weeks. 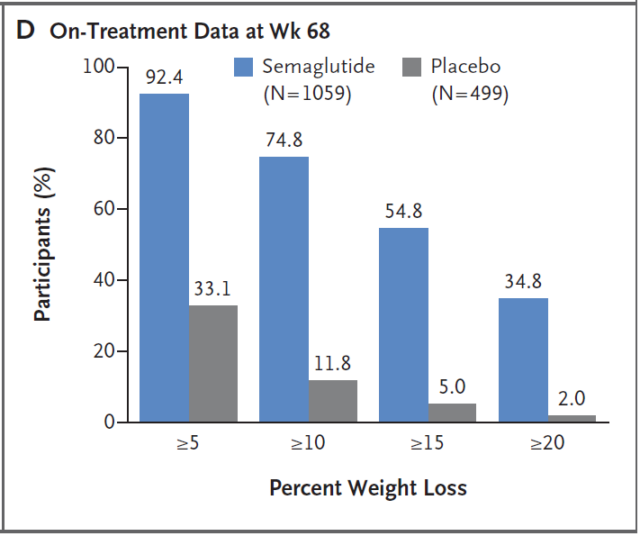 More importantly, people who lose weight after using semaglutide have reduced risk factors for heart disease and diabetes such as waist circumference, blood lipids, blood sugar, and blood pressure, and their overall quality of life has also been improved.

In this phase 3 clinical trial, some participants reported side effects, including mild to moderate nausea and diarrhea, but these side effects are short-lived and can usually be resolved without the need to terminate the trial permanently.

This clinical trial represents a major advance in the treatment of obesity, because semaglutide has been approved to treat type 2 diabetes in low doses, so doctors are already familiar with its usage.

With the results of this large-scale clinical trial as evidence, semaglutide was approved by the FDA for marketing less than four months after the release of the Phase 3 clinical results.

Many people who want to lose weight must be very concerned about the price. Novo Nordisk has not announced the specific price of the weight-loss drug, but said that its price will be similar to the company’s other weight-loss drug, Saxenda. Liraglutide (Saxenda) is approved as an adjunct to a low-calorie diet and intensive exercise to treat obesity in adolescents aged 12-17 at a cost of US$1,300/month.

This also means that if you want to use the best weight loss drug in history.  In addition, Novo Nordisk stated that the drug is for injection but is currently developing an oral version.