So, what are the characteristics of the Indian mutant? What is the impact on the epidemic?

B.1.617: There is more than one variation in the pedigree

At present, B.1.617.2 frequently appears in the media. The main reason is that it spread rapidly in the UK. It has now squeezed out the British mutant B.1.1.7 and has become the main epidemic mutant in the UK. It is also present in Guangzhou, and B.1.617.2 has been discovered and reported in more than 60 countries-including Vietnam and Japan, which produced new mutant strains in various mutant virus conferences.

It was B.1.617.1 that caused the problem in Australia, not B.1.617.2. Brett Sutton, a local health officer in Victoria, roughly estimated that B.1.617.1 has a stronger transmission capacity, and an infected person can infect more than 5 other people. That is to say, he estimated that the R0 of B.1.617.1 is greater than 5.

Pictures of Australia’s news report that the city was closed due to B.1.617.1

In India, starting from the outbreak of the outbreak this year, B.1.617.1 was the first to be uploaded with more sequences, and then B.1.617.2 came later, with higher upload frequency, and B.1.617.1 upload frequency decreased. However, the frequency of uploading mutant strain sequences to GSAID in India is inherently low. It is not clear whether B.1.617.2 actually dominates or because the uploaders have their own choices. Local media in India stated that the situation in each state is different, and since India uploads and reports fewer details about the virus, the specific situation cannot be determined.

The third variant of this pedigree, B.1.617.3, has not yet been widespread in developed countries, so there is little information.

What is the difference between these three variants?

Picture of the information released by the US CDC

At present, local researchers in India mentioned in the preprint that E484Q has the effect of anti-neutralizing antibodies, and its specific capabilities lack further research.

B.1.617.2 Although there is no mutation site of E484Q, it has the site of T478K. A paper published in the Journal of Medical Virology in early May pointed out that T478K has the ability of immune escape.

Picture Information released by the US CDC

Facing the extremely scarce information of Indian mutant strains, New Scientist, an established British popular science magazine, pointed out that the actual transmission capacity, lethality, and ability of the mutant strains against neutralizing antibodies, etc., require active tracking, large-scale reporting and uploading of virus sequences. This is precisely what India has not done in its main endemic area.

What is the effect of the Indian variant on the vaccine?

Recently, Public Health England and the Pasteur Institute in France have released their own research preprints. They have slightly different views on the effectiveness of different vaccines against the mutant strain B.1.617.2.

In the British version, the vaccines of Pfizer and AZ can maintain a certain effect on B.1.617.2 after completing two injections.

At the top of the bar graph is three weeks after the first shot, both of which are only about 33% protective. After the second shot, Pfizer still has 88% protection against B.1.617.2, while AZ has 60%. .

In the French version, Pfizer’s data is basically no problem, but AZ’s data is completely different from what the British did. 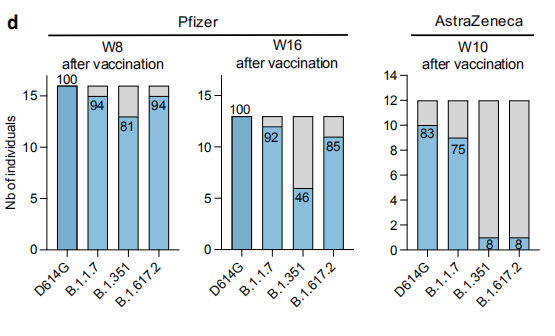 In the Pasteur Institute’s research, 16 weeks after the completion of the immunization, the plasma test of the inoculated Pfizer vaccine produced effective neutralizing antibody samples for B.1.617.2, accounting for 85%, which is roughly similar to the results of the British preprint. In the AZ group, the test data of B.1.617.2 was out after 10 weeks, only 8%.

Neither of these two studies have been peer-reviewed or officially published. One is from Public Health England and the other is from the Pasteur Institute. In terms of credibility, no one is better than anyone. However, the British are very witty. They published a correspondence in The Lancet, repeating the conclusions of this preprint, leading many people who do not know the truth to believe that their research results have been published by The Lancet. In fact, this is not the case.

Whether the inactivated vaccine is effective against B.1.617.2, different sources have also given different conclusions. A preprint published by the National Institute of Virology in India showed that after two injections of the Indian inactivated vaccine COVAXIN, the patient’s neutralizing antibody geometric mean titer (GMT) was 88.48 (95% CI: 62.02~126.2), which was higher than that of COVAXIN. The antibody produced by B1 was nearly half lower. The researcher was disappointed by the local media’s claims of this result.

However, this is only the case of inactivated vaccines in India, and the preprint has not undergone peer review, and it cannot directly deny the role of COVAXIN. India has not suspended the vaccination of COVAXIN.

According to a report by Xinhua News Agency, Shao Yiming, a researcher at the China Center for Disease Control and a member of the Vaccine R&D Team of the Scientific Research Group, said at a press conference on the 20th that preliminary research results show that Chinese current inactivated vaccines can cope with Indian variants and can produce Protective effects. In the process of virus mutation, the mutation will increase. Once there are mutant strains that our existing vaccines cannot cope with, there are quick ways to deal with inactivated vaccines.