Biogen New Drug Aducanumab: Will targeting TREM2 be a new hope for AD?

Biogen Aducanumab: Will targeting TREM2 be a new hope for AD? On June 7, 2021, the FDA announced the accelerated approval of Aduhelm (aducanumab) developed by Biogen to treat patients with Alzheimer’s disease (AD). Aducanumab is a monoclonal antibody drug developed based on the β-amyloid (Aβ) hypothesis. 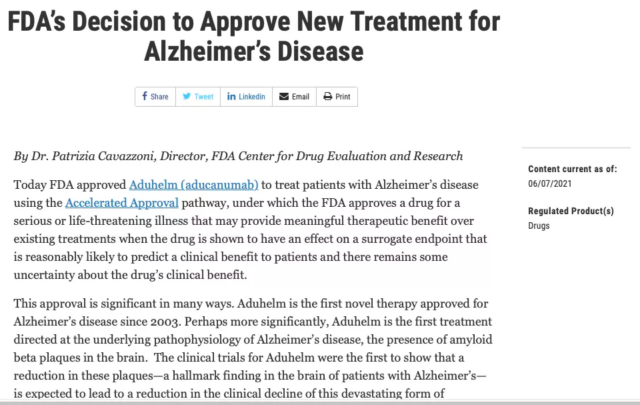 Although AD has been discovered for more than a hundred years, the cause of its disease has not yet been determined, and the scientific community has different opinions on this. The Aβ hypothesis put forward by scientists in 1991 is one of the most mainstream views explaining the pathogenesis of AD, but since it was put forward, controversy has continued.

As soon as the Aduhelm was approved, Some people were encouraged that this was the first new type of therapy approved in 18 years, and some people complained that it was like drinking poison to quench thirst. There are many analyses, so I won’t repeat them in this article.

We switched our perspective to TREM2, and the study found that its coding variants increase the risk of Alzheimer’s disease and other neurodegenerative diseases. These findings have promoted the industry’s strong interest in TREM2.

The trigger receptor (TREM2) expressed on myeloid cell-2 is a transmembrane receptor of the immunoglobulin superfamily.

The ligand of TREM2 contains a large number of anionic molecules, which are free and bound to the plasma membrane, including bacterial products, DNA, lipoproteins and phospholipids. TREM2 consists of an extracellular domain, a single transmembrane helix and a short intracellular region lacking any signal transduction motifs. The extracellular domain includes a V-type immunoglobulin domain and a short connecting peptide. The metalloproteinases ADAM10 and ADAM17 can cleave TREM2 here.

Studies on mouse macrophages have shown that TREM2 binds to the adaptor proteins DNAX activated protein 12 (DAP12) and DAP10 through oppositely charged residues in their transmembrane domains. When TREM2 ligands interact, these co-receptors are phosphorylated and recruit intracellular signal transduction mechanisms. 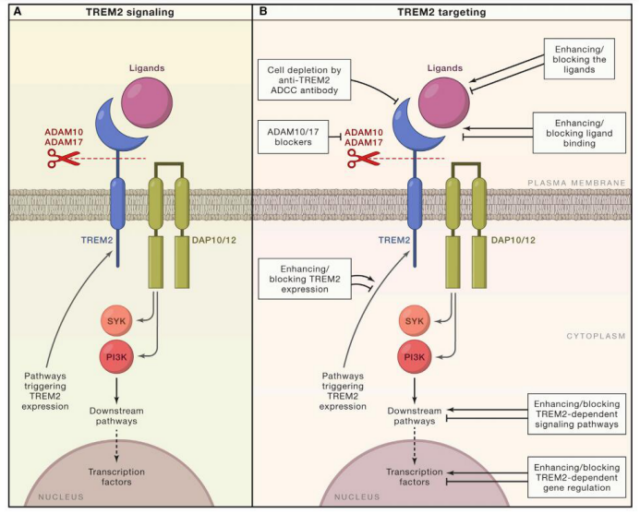 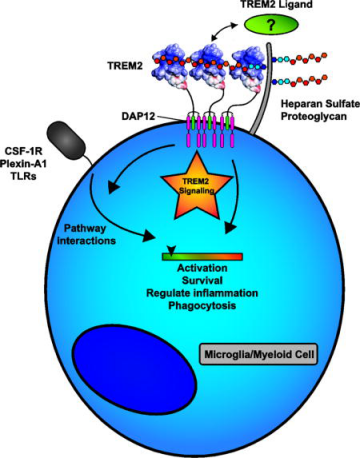 2. The role of TREM2 in Alzheimer’s disease

TREM2 and DAM play an important role in AD and other neurodegenerative cases.

In fact, overexpression of human TREM2 in microglia of AD mouse models improved the pathological phenotypes, including plaque load and cognitive impairment.

The most common TREM2 variant associated with AD is R47H, which is a mutation that causes loss of ligand binding capacity, thereby reducing the phagocytosis of TREM2 interacting ligands, leading to Aβ, APOE, CLU/APOJ, and plaque-related Abnormal accumulation of lipids.

Soluble TREM2 (sTREM2) is elevated in the cerebrospinal fluid (CSF) of patients with various neurological diseases, such as MS, AD, Parkinson’s disease (PD), and prokeratin (GRN) mutations Frontotemporal dementia (FTD), natural aging of individuals with normal cognition, and the plasma of patients with Down syndrome. Matching the cerebrospinal fluid concentration of sTREM2 with other measurements of human brain function indicates that sTREM2 corresponds to the hereditary AD risk state and is related to disease characteristics.

These results indicate that the level of sTREM2 reflects the response of the activated state of microglia to established neuronal degeneration, and the concentration of sTREM2 in the cerebrospinal fluid can be used as an alternative immune biomarker for neuronal damage.

sTREM2 is produced through protein hydrolysis by-products or through alternative splicing, which suggests that sTREM2 may not only have biomarker value, but also have biological functions. In fact, sTREM2 has been shown to promote the survival of myeloid cells under stress. The targeted injection of adenoviruses overexpressing sTREM2 or sTREM2 into the brains of 5xFAD mice resulted in a reduction in Ab plaque load and rescued learning and memory abilities in a microglia-dependent manner.

This result shows the therapeutic potential of sTREM2.

3. New role of TREM2 in cancer

There is increasing evidence that TREM2 plays a role in tumor-associated macrophages (TAMs) and myeloid-derived suppressor cells (MDSCs). A recent study found that TREM2 was significantly up-regulated in peripheral blood mononuclear cells and TAMs in lung cancer patients and tumor-bearing mice compared with healthy controls. In addition, the level of TREM2 in macrophages surrounding tumor cells is positively correlated with tumor progression.

In addition, TREM2+ myeloid cells have a strong inhibitory effect on T cell proliferation in vitro. Another study showed that compared with normal gastric tissue, TREM2 mRNA and protein expression levels in gastric cancer samples were significantly increased. In this study, the authors also proved that the TREM2 levels of 317 gastric cancer patients were significantly correlated with the prognosis of the patients. Negative correlation.

TREM2 is also considered to be a target for glioma and hepatocellular carcinoma, once again proving that its upregulation is related to tumor progression. In addition, recent scRNA-seq studies on the tumor microenvironment have shown that TREM2 is expressed in multiple myeloid cell subpopulations, some of which overlap with various characteristic markers of MDSCs. Studies have shown that in some tumors, TREM2 is expressed in cancer cells and can directly promote their survival, such as esophageal adenocarcinoma. 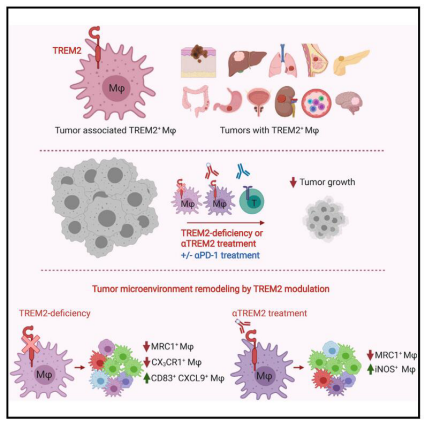 The latest research found that TREM2–/– mice are more resistant to the growth of various cancers than wild-type mice, and respond more sensitively to anti-PD-1 immunotherapy. In addition, when combined with anti-PD-1, anti-TREM2 monoclonal antibody inhibits tumor growth and promotes tumor regression.

The scRNA sequence showed that the deletion of TREM2 and anti-TREM2 were both related to the lack of MRC1+ and CX3CR1+ macrophages in tumor invasion. At the same time, the expansion of myeloid cell subsets expressing immunostimulatory molecules could promote the improvement of T cell response. In more than 200 human cancer cases, TREM2 is expressed in tumor macrophages and is negatively correlated with the prolonged survival of the two cancers. Therefore, TREM may be an ideal target for targeted therapy of tumor bone marrow infiltration and enhanced checkpoint immunotherapy.

The TREM2 signal in macrophages has recently been thought to be involved in metabolic diseases.

TREM2 is a key signal center for AD, metabolic syndrome and cancer, and there are many possible interventions to target the TREM2 pathway.

The most prominent method is to use a specific monoclonal antibody or small molecule that can block or activate downstream signals to directly target the active region of the receptor.

A study led by Alector, LLC used an anti-TREM2 agonist monoclonal antibody (AL002), the single-cell RNA sequence of microglia after acute systemic administration of AL002 in common variant and R47H transgenic mice All showed a proliferation-inducing effect. Long-term use of AL002 can reduce filamentous plaques and axon dystrophy, affect behavior, and alleviate microglial inflammation. The drug is currently undergoing phase I clinical trials in AD patients.

A study led by Christian Haass and Denali Therapeutics of the Center for Neurodegenerative Diseases in Munich, Germany, aimed at the cleavage site of TREM2 to block the shedding of ADAMs’ receptors, increase the receptor’s membrane concentration and enhance its signal activity. 4D9 is an antibody that binds to the stem region of TREM2 and reduces its proteolytic shedding. In addition, 4D9 antibody has also been shown to activate TREM2 signaling, increase microglia survival and Aβ uptake. In the amyloid precursor protein (APP) knockout AD mouse model, 4D9 can reduce the cortical plaque load, but no change in cognitive ability was reported.

In addition, targeting TREM2 is also very promising in tumor immunotherapy. The latest study published in cell shows that it can be used in sarcoma, colorectal cancer and breast tumor models induced by 3-methylcholanthrene (MCA). , TREM2–/– mice are more resistant to tumor growth than wild-type (WT) mice. TREM2–/– is associated with changes in macrophage subpopulations and an increase in CD8+ T cells in tumors, some of which express PD-1. This result suggests that TREM2 blockade may enhance the anti-tumor response mediated by checkpoint immunotherapy. 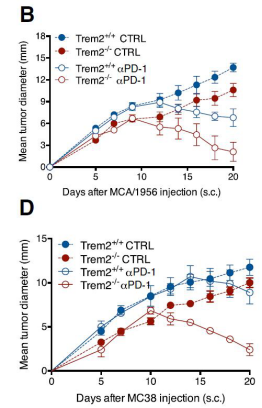 Subsequently, the application of Fc-mutated anti-TREM2 monoclonal antibody (mAb) to tumor-bearing mice can slow down tumor growth and significantly improve the efficacy of anti-PD-1 immunotherapy. The analysis of bone marrow cell morphology by single-cell RNA sequencing (scRNA-seq) showed that anti-TREM2 monoclonal antibody treatment can cause significant changes in the tumor-infiltrating macrophage population: CX3CR1+ and MRC1+ macrophage subpopulations decrease, and at the same time induce expression potential A new subgroup of immunostimulatory molecules.

At the same time, studies have found that TREM2 is a marker of macrophage infiltration in tumors. The expression of TREM2 is negatively correlated with the overall survival rate and recurrence-free survival rate of colorectal cancer (CRC) and triple negative breast cancer (TNBC). Anti-TREM2 monoclonal antibody remodeling tumor-associated macrophages is a very promising approach to supplement checkpoint immunotherapy.