FDA approves Pfizer Prevnar 20 (20vPnC) vaccine: for adults ≥ 18 years old! Pfizer recently announced that the U.S. Food and Drug Administration (FDA) has approved Prevnar 20 (pneumococcal 20-valent conjugate vaccine, 20vPnC) for use in adults aged 18 and over to prevent the serotype of Streptococcus pneumoniae in the vaccine Caused by aggressive disease and pneumonia.

With a single injection, Prevnar 20 will provide a powerful and meaningful protection for the adult population from the serotypes that cause most of the global pneumococcal disease.

Prevnar 20 was approved through the priority review process. In September 2018, the U.S. FDA has granted 20vPnC Breakthrough Drug Designation (BTD) for the prevention of aggressive diseases and pneumonia in adults 18 years and older. In September 2017 and May 2019, the FDA granted Fast Track Qualification (FTD) for 20vPnC for adult and pediatric indications respectively.

This approval is based on data from Pfizer’s adult clinical program, which includes phase 1 and phase 2 trials, and 3 phase 3 trials (NCT03760146, NCT03828617, NCT03835975), which evaluated the safety and immunogenicity of Prevnar 20 Sex. The phase 3 trial enrolled more than 6000 adult subjects 18 years and older, including elderly people 65 years and older, as well as adults who have been vaccinated against pneumococcal and adults who have not been vaccinated against pneumococcal.

Dr. Kathrin U. Jansen, Pfizer’s Senior Vice President and Head of Vaccine Development, said: “Today’s FDA’s approval of Prevnar 20 marks a step forward in our ongoing struggle to help solve the burden of pneumococcal disease (including pneumonia) in the adult population. An important step, compared with any other pneumococcal conjugate vaccine, it provides protection against more pathogenic serotypes.”

Globally, pneumococcal pneumonia is estimated to cause about 500,000 deaths and 30 million infections in elderly people aged 70 years and above. All in all, the 20 serotypes contained in 20vPnC together cause most of the current pneumococcal diseases in the United States and the world. 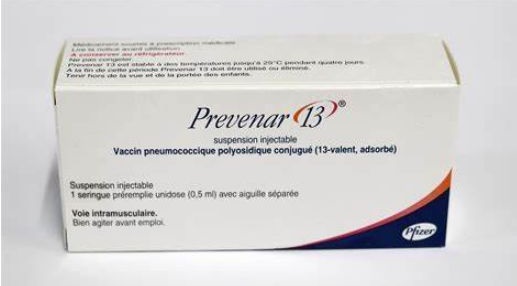 Prevnar 13 (Prevnar 13) is an overweight pneumococcal vaccine marketed by Pfizer. In 2020, global sales of the vaccine were 5.85 billion U.S. dollars, the same as the previous year.

(1) for adults ≥18 years of age, to prevent pneumococcal disease and invasive diseases caused by 13 serotypes of Streptococcus pneumoniae;

(2) for 6 weeks-17 Children aged (before the 18th birthday) to prevent invasive diseases caused by 13 serotypes of Streptococcus pneumoniae;

(3) For children 6 to 5 years old (before the 6th birthday), to prevent pneumonia caused by 13 serotypes of pneumonia Ear infections caused by 7 species of cocci.

Prevnar 13 is not 100% effective and can only help prevent the 13 serotypes covered in the vaccine.