What is the impact of gene editing on gene therapy and its safety?

What is the impact of gene editing on gene therapy and its safety?  The past five years have witnessed a renaissance in the field of gene and cell therapy, and the first approved therapy after decades of hard work (Figure 1).

This includes the first oligonucleotide-based therapies (Spinraza, Exondys 51, Vyondys 53), three cell therapies (Kymriah, Yescarta, Tescartus- and two in vivo gene therapies (Luxturna and Zolgensma), and many more follow Afterwards (Note: the situation at the time this article was published).

These therapies treat a variety of clinical indications and tissue targets, including neuromuscular diseases, hereditary blindness, and cancer. Although these approved therapies have changed the lives of affected patients, they have provided a broader impact on the content displayed in the field and laid the foundation for the development of treatments for many other diseases.

For example, Luxturna and Zolgensma target Leber congenital amaurosis and spinal muscular atrophy respectively. The success of AAV gene transfer to the human retina and central nervous system in vivo has promoted the development of AAV-based gene transfer to the liver and central nervous system. . Skeletal muscle is used to treat hemophilia [1] and Duchenne muscular dystrophy [2].

Similarly, the development of early technology to transfer lentiviral and retroviral genes in vitro to T cells has led to the expansion of adoptive cellular immunotherapy to the modification of hematopoietic stem cells, which can treat genetic diseases such as sickle cell disease and β-thalassemia. Approved in the European Union. Currently under review in the United States [3].

Although the potential to successfully extrapolate these early gene therapies to other diseases and patient populations is exciting, next-generation technologies are significantly expanding the impact of these drugs on the treatment of human diseases (Figure 2). 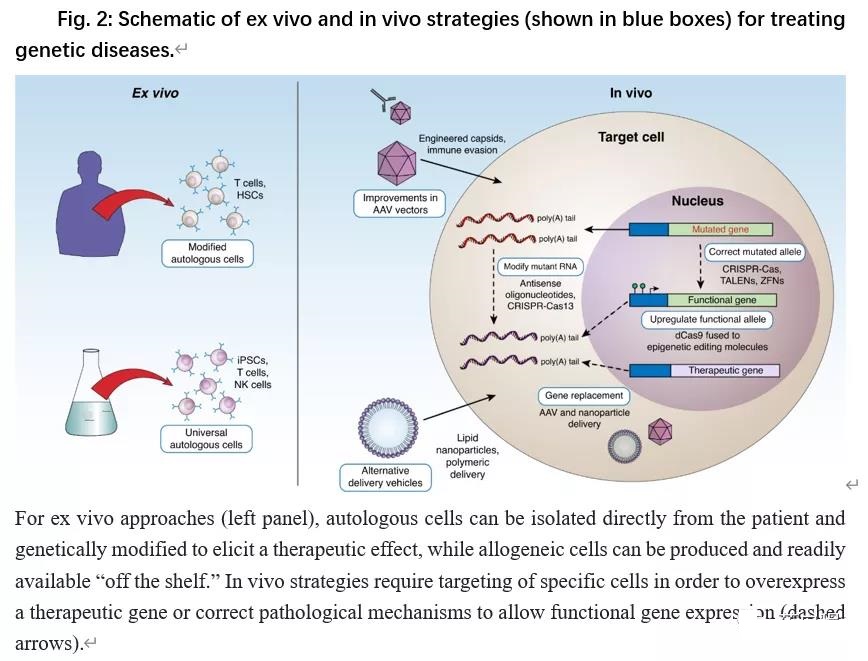 For example, the main obstacle to wider application is still the immune response to gene delivery vectors and foreign transgene products. Therefore, the control of the human immune system is where some of the most influential jobs will take place in the near future. For example, despite the surprising success of many AAV-based gene therapies, as many as 50% of patients are currently excluded from treatment due to pre-existing immunity to viral capsids.

The latest advances and efforts in clinical trials have led to technological advances to circumvent this immune barrier, such as modifying the AAV capsid to avoid pre-existing neutralizing antibodies [5,6] and methods to temporarily remove antibodies from the circulation [5,6] 7]. The immunosuppressive program can also provide a way to circumvent pre-existing immunity and avoid adaptive immunity to the carrier, which can be followed by re-administration if necessary [8,9].

In addition, the engineering and analysis of non-viral nanoparticles for gene delivery has also made significant progress [10]. Based on the clinical success of siRNA nanoparticle delivery and the first approval of the siRNA-based drug Onpattro in 2018 for the treatment of hereditary ATTR amyloidosis [11], these technologies may have a huge impact on future gene therapy. One possible advantage of nanoparticles is the possibility of bypassing the detection of the immune system that restricts virus transmission. In addition, chemically defined nanoparticle formulations provide unique opportunities for functionalization and tissue targeting, which may ultimately be critical to the success of in vivo gene transfer outside the retina and liver.

In addition to the first generation of gene therapies focused on delivering transgenes, gene editing technology is providing support for new treatment methods based on the precise modification of the human genome sequence. Although gene editing therapy entered clinical trials for the first time in 2010 as a method to prevent T cell infection from HIV[12], in the past year alone, CRISPR-based clinical trials of gene editing for sickle cell disease proved the first in disease modification efficacy.

An example is β-thalassemia (CTX001) [13]. This groundbreaking success, coupled with the promising safety record of gene editing T cells and HSCs in human trials so far [13, 14, 15], is highly anticipated for ongoing and upcoming clinical trials of in vivo genome editing The results laid the foundation, including the current trial of AAV-based gene editing in the retina (EDIT-101)[16] and the planned trial of non-viral nanoparticle-based CRISPR delivery to the liver (NTLA-2001)[13, 17]. However, expanding to target tissues beyond the retina and liver faces many challenges.

So far, the National Institutes of Health has announced a commitment to invest US$190 million in six years to support the Somatic Genome Editing Alliance, which will directly address the challenges of delivery, safety, and system modeling to advance in vivo genome editing. To a wider area. Solve human health barriers of different tissue types and disease conditions. To be sure, the products of the alliance will significantly accelerate the development of gene editing therapies in the next decade and beyond.

Current gene editing technologies use nuclease-based systems to cut DNA strands and stimulate DNA repair pathways to introduce desired sequence changes. Although these technologies have only just begun to be clinically tested, after these efforts, next-generation editing technologies have emerged to improve the specificity, accuracy, efficiency and applicability of different types of diseases [18,19]. For example, the invention of base editing and primer editing made it possible to accurately change the genome sequence without DNA breaks and without relying on the activities of endogenous DNA repair pathways.

RNA targeted editing technology allows transient and reversible modification of gene expression without permanent changes to the genome sequence, which may improve efficiency and safety [19]. Finally, epigenome editing technology has the advantages of tunability, reversibility, and the potential for sustained results after transient editing activities that can be inherited through cell division.

The rapid pace of technological innovation in the editing field will definitely change our current view of gene therapy, but it will also greatly broaden the scope of human diseases to which these methods can be applied.

Another area of ​​innovation that will have a significant impact on the field of gene therapy in the near future is functional genomics and our understanding of human genome regulation. For example, the function of about 6,000 of about 20,000 human genes is currently unknown [21]. While enabling gene editing therapy, CRISPR technology has also promoted the functional anatomy of these gene sequences [22]. In addition, scientific research and therapeutic intervention have traditionally focused almost exclusively on genes, even though 98% of our genome is composed of non-coding DNA, which contains epigenetic regulatory factors responsible for more than 90% of susceptibility to common diseases.

In fact, the first example of the therapeutic efficacy of the CRISPR gene editing method (CTX001) involves editing remote gene regulatory elements to alter gene expression, rather than editing underlying gene mutations, as a strategy to compensate for the lost beta globin in hemoglobinopathy Work [24]. Although efforts such as the NIH ENCODE Consortium have mapped more than 2 million of these gene regulatory elements in hundreds of human cell types and tissue samples, few of these sites know their functions [25]. Annotating the dark matter of the genome will lead to a whole new field of disease biology and a category of treatment targets, which can attack human diseases through gene therapy, gene editing, and other methods from a completely new perspective.

It is worth noting that the speed of technological innovation in gene and cell therapy greatly exceeds the ability to safely and quickly promote promising drug candidates for the benefit of patients. The current regulatory model that requires a large number of patients to determine safety and effectiveness is not suitable for treatment techniques that address mutations found in a single patient or a very small number of patients.

A promising strategy is to create a single composition that can treat a larger patient population. Universal cell therapy is produced by applying gene editing to design “immune stealth” allogeneic donor cells that evade detection by the host immune system, and can be used in regenerative medicine and adoptive cell immunotherapy [26].

Several clinical trials are currently underway to study this designed therapy [13], and the results read from these trials in the near future will significantly affect the future of gene and cell therapy. Although this method is promising, it does not solve the problem of correcting genetic mutations in the body, nor does it use the huge opportunities and increasing efforts to develop transformative technologies such as basic editing and primary editing that may correct individual private mutations.

Similarly, recent reports of oligonucleotide-based therapies targeting private gene mutations and successful treatment of human Batten disease patients provide a potential blueprint and motivation for these efforts [27]. Therefore, in the near future, one of the biggest changes in the field of cell and gene therapy will be in the field of regulatory science, and we will respond to the unique challenges posed by these innovative technologies as we move to personalized therapy.

Gene therapy is arguably the most exciting field in biotechnology at the moment, not only because of recent advances, but also because of upcoming possibilities. With unprecedented levels of control over nucleic acid delivery, immune system regulation, and precise manipulation of the human genome, technologies that were unimaginable ten years ago will surely open up new medical fields in the next ten years.

At the same time, this first insight into the new world of technological capabilities has inspired entirely new research fields, such as synthetic biology, cell reprogramming, and high-throughput functional genomics, which will undoubtedly continue to reshape the face of biomedical research.