On June 14, 2021, the high-profile protein vaccine manufacturer, Novavax of the United States, released a news report, reporting the results of phase III clinical trials in 29,960 people tested in the United States and Mexico.

In Novavax’s genetic testing of 54 of 77 infected people, half of them were found to be Alpha strains.

Among PREVENT-19, the NVX-CoV2373 vaccine showed very good safety and tolerability. Pain and tenderness at the injection site are the most common, lasting less than 3 days; in addition, fatigue, headline and muscle pain are common systemic symptoms, lasting less than two days. There was no statistically significant difference in direct serious adverse reactions between the vaccine group and the placebo group.

NVX-CoV2373 can be placed at room temperature for a long time, and it is easier to operate and use. Therefore, it has unique advantages in countries and regions with poor transportation and storage conditions.

In addition, the NVX-CoV2373 vaccine is a recombinant protein vaccine, which makes it the choice of many people who are hesitant to mRNA vaccines.

Novavax has reached an agreement with Gavi, a vaccine alliance, to provide 1.1 billion doses of vaccine to low- and middle-income countries. In addition, Novavax also cooperates with the Serum Institute of India and SK Bioscience of South Korea to produce vaccines.

Although Novavax’s vaccine technology is very good, the entire development process is full of low-level errors.

The same is true for submitting an FDA application for approval. Novavax plans to submit an emergency use authorization (EUA) application to the FDA, but it may take until the end of September to submit an EUA application; this is very different from the immediate submission of applications by companies such as Pfizer and Moderna.

And because the current US vaccination rate has exceeded 52% of the entire population, the US Food and Drug Administration (FDA) may not authorize the EUA, which means that it will take more months to obtain approval.

For the burning eyebrows of COVID-19 epidemic, the delayed application means that more patients cannot use the vaccine; it also means that a lot of markets have been lost, which can be described as a double defeat.

Nevertheless, I believe that Novavax will keep getting better. Because its recombinant protein vaccine technology is too strong.

NVX‑CoV2373 is a recombinant protein vaccine.

Novavax uses its own original nano recombinant protein technology to prepare vaccines to induce specific antibodies; at the same time, Novavax also has a patented special adjuvant to stimulate the human body to induce particularly high specific antibodies. Under these two technologies, the neutralizing antibody induced by NVX‑CoV2373 is 3.97 times the antibody level of the recovered patient! The levels of neutralizing antibodies induced by mRNA vaccines from Moderna (4.13 times) and Pfizer/BioNTech (3.84 times) are comparable.

With such a high level of neutralizing antibodies, NVX-CoV2373’s protection against the new coronavirus is equivalent to that of Pfizer and Moderna’s mRNA. In a clinical trial with 15,000 subjects in the UK, the overall protection of NVX‑CoV2373 was 89.7%; the protection of wild-type SARS-CoV-2 was 96.4%; the protection of Alpha mutant strain was 86.3%.

Recently, Novavax reported the results of part of the clinical trial of the COVID-19 vaccine combined with influenza vaccine that many people are concerned about and inquired. This data has been uploaded to medRxiv and has been submitted to Lancet.

The study pointed out that the combined vaccination has 87.5% protection against COVID-19. The study was randomly enrolled in a 1:1 group, and 217 people were given the COVID-19 vaccine NVX-CoV2373. Some of them received the flu vaccine at the same time as the first dose of NVX-CoV2373; 214 people received a placebo.

This study pointed out that during the high season of seasonal influenza, especially at a specific time when it is double epidemic with COVID-19, combined vaccination is a simple and effective method. This method can be routinely promoted in the future.

2. In the third phase of clinical trials, 30,000 subjects were enrolled in the United States and Mexico. The vaccine group and the placebo group were divided into 2:1 groups. The overall protective effect was 90.4%, and the protective effect was 100% for moderate and severe cases. There is also a 91% protection rate for high-risk groups.

4. Protective ability of mutant strains: Among 77 cases, 54 have been sequenced. 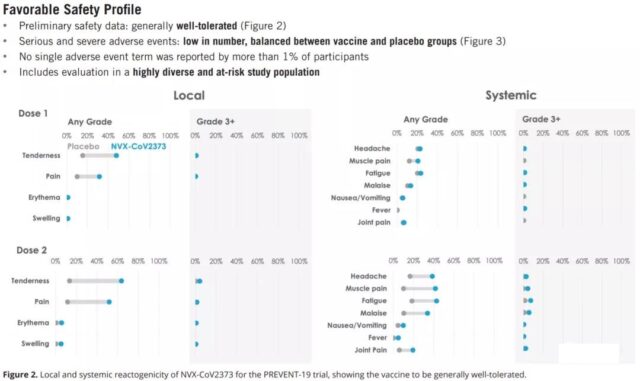