The third wave of the COVID-19 epidemic will sweep the world?

The third wave of the COVID-19 epidemic will sweep the world?  Expert: In the third wave, those under the age of 18 who have not been vaccinated will face the greatest risk.

On June 21, local time, experts from the World Health Organization (WHO) stated at a routine press conference for the neCOVID-19pneumonia that the Delta variant of the COVID-19 virus, which first appeared in India, has spread to 92 countries around the world, and its high transmission power has made experts feel Worry.

Affected by the rapid spread of mutant strains, India, the United Kingdom, Japan and other countries may face a new round of epidemic impact.

According to the CNBC official website of the United States, on June 18, local time, WHO Chief Scientist Soumya Swaminathan said at a press conference that the Delta variant of the COVID-19 virus is becoming the main epidemic strain of the global COVID-19.

As early as last month, the Delta mutant strain was listed as a “variant of concern” by the WHO. When a variant strain is shown to be more contagious, more lethal, or more resistant to vaccines and treatments, it will be labeled “high concern.”

Currently, the Delta variant is rapidly sweeping the world, with the largest number of infections in the UK.

The world’s largest influenza and new coronavirus data platform GISAID shows the number of virus strains uploaded after gene sequencing in various countries. According to the incomplete statistics of the platform, as of June 14, the top five people infected with Delta variants by country were: the United Kingdom (49,657 cases), India (6685 cases), the United States (3051 cases), and Germany (747 cases) And Singapore (702 cases). 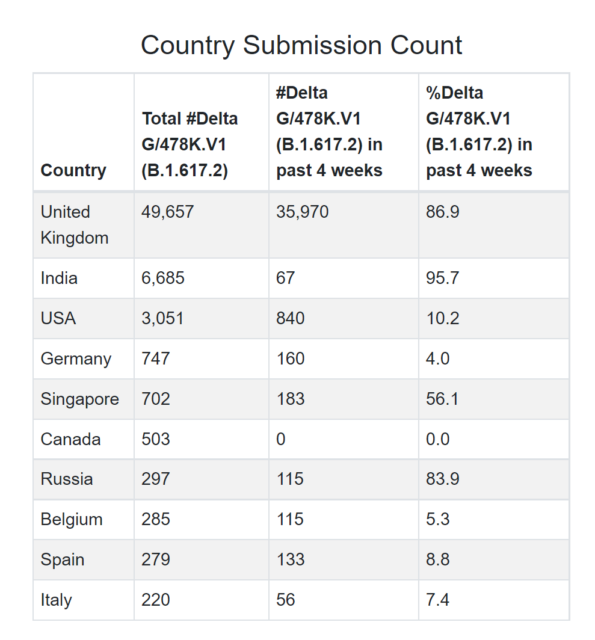 According to the BBC report, as of June 16, the number of people infected with the Delta variant in the UK has reached 75,953, up from 42,323 the previous week. 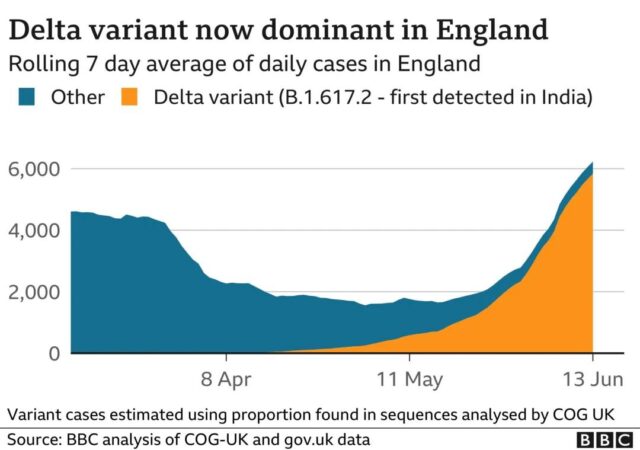 Delta variants (orange part) are dominant in the UK

According to CNBC, data from the Centers for Disease Control and Prevention (CDC) last week showed that among the newly confirmed cases in the United States, patients infected with the Delta variant accounted for 10%, exceeding the 6% in the previous week. CDC Director Rochelle Walensky called on Americans to be vaccinated against the new coronavirus on June 19. She also anticipated that Delta will become a major strain of the virus in the United States.

In addition, according to media reports such as “Russia”, “Financial Times”, and “Wall Street Journal”, the Delta variant is also conquering countries such as Europe and Asia. The epidemic situation in Moscow, the Russian capital, has rapidly deteriorated, and the Delta variant has been found in 90% of infected people. Delta variants also accounted for 96% of new cases in Portugal, and their emergence accelerated in Germany, France and Spain. Indonesian health officials also said that the Delta mutant strain occupies a dominant position in places such as the capital Jakarta.

On June 16, the WHO stated that some countries are trying to vaccinate, gradually unblock them, and return to order, but the high transmission power of the Delta mutant strain casts a shadow over this trend.

A new wave of epidemics may strike in the future

British Prime Minister Johnson announced on the evening of the 14th that in view of the rapid spread of the mutant COVID-19 virus, England will postpone the implementation of the final phase of “unblocking” measures for 4 weeks.

According to BBC reports, the Chief Minister of Wales, Mark Drakeford (Mark Drakeford) recently stated at a press conference that scientific advisers believe that the UK is currently in the early stages of the third wave of the epidemic and Wales is facing a severe public health situation. Last week, 23.6 people per 100,000 people in Wales were infected. This transmission was caused by the Delta variant.

From June 3 to 17, Reuters conducted a temporary survey of 40 medical experts, scientists, virologists, epidemiologists and professors from all over the world. Among the 24 experts who analyzed the trend of the epidemic, more than 85% of the respondents believed that a new wave of epidemics in India would arrive in October, and three of them predicted that it would arrive in August at the earliest.

Although many experts have pointed out that the increase in vaccination coverage will enable the new wave of epidemics to be better controlled than the current epidemic, as of now, only about 5% of India’s 950 million eligible people for vaccination have received Fully vaccinated.

Twenty-six experts warned that in the third wave, those under the age of 18 who have not been vaccinated will face the greatest risk.

In addition, Japan faces the risk of a “fifth wave of epidemic”.

According to “People’s Daily Online”, at the expert meeting of the Japanese Ministry of Health, Labour and Welfare on the 16th, Tokyo Medical University Distinguished Professor Atsuro Hamada reminded the risk of the “fifth wave of epidemics”. He believed that a new round of epidemic outbreaks may occur in Tokyo from July to August: “If the mutated virus found in India spreads on a large scale due to the increase in the flow of people, the next epidemic will follow the same trend as in April, and Japan will enter a state of emergency again.”