Gilead recently announced that it has submitted a new drug application (NDA) for lenacapavir (GS-6207), a long-acting HIV-1 capsid inhibitor, to the U.S. Food and Drug Administration (FDA). In the treatment of multi-drug-resistant (MDR) HIV-1 infected patients who have received multiple treatment-experienced (HTE) in the past.

Gilead also plans to submit lenacapavir’s marketing application to the European Medicines Agency (EMA) and other global regulatory agencies in the coming months. If approved, lenacapavir will become the first capsid inhibitor and the only HIV-1 treatment regimen to be administered every 6 months.

Lenacapavir is a potential first-in-class long-acting HIV-1 capsid inhibitor. The drug has strong antiviral activity and can quickly reduce viral load after a single subcutaneous injection. In May 2019, the US FDA granted lenacapavir breakthrough drug designation (BTD), combined with other antiretroviral drugs, for the treatment of HTE MDR HIV-1 infection.

Currently, lenacapavir is being studied as a drug that is injected subcutaneously every 6 months. This drug is a potential first capsid inhibitor for the treatment of HIV-1 infection, and the currently approved antiretroviral therapy (ART) There is no overlapping resistance.

Currently, lenacapavir is being developed in combination with other antiretroviral drugs for the treatment of children who are currently undergoing failed antiretroviral therapy due to drug resistance, intolerance or safety considerations, and children weighing more than 35 kg. Adult MDR HIV-1 infected persons. Lenacapavir inhibits HIV-1 replication by interfering with multiple important steps in the virus life cycle, including capsid-mediated HIV-1 proviral DNA uptake, virus assembly and release, and capsid core formation.

Lenacapavir NDA is supported by data from the Phase 2/3 CAPELLA trial (NCT04150068). The trial evaluated the safety and effectiveness of a subcutaneous injection of lenacapavir every 6 months in combination with an optimized antiretroviral background regimen. The key data on lenacapavir will be announced at the 11th International AIDS Society (IAS) HIV Science Conference in 2021, which will be held on July 18-21.

Dr. Merdad Parsey, Chief Medical Officer of Gilead, said: “lenacapavir is an important breakthrough innovation with transformative potential for multidrug-resistant HIV-infected patients with very limited treatment options. The submission of the drug NDA brings us closer to providing An innovative treatment plan helps to resolve the barriers to viral suppression and the unmet medical needs of people with multidrug-resistant HIV infection.” 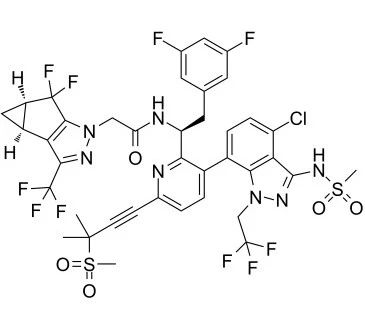 CAPELLA is a global, multicenter, double-blind, placebo-controlled Phase 2/3 study designed to evaluate the antiviral activity of lenacapavir injected subcutaneously every 6 months for the treatment of HTE MDR HIV-1 infection. The trial included men and women infected with HIV-1 and is currently being conducted in research centers in North America, Europe and Asia.

In this trial, 36 cases of HIV-1 adults who are resistant to multiple types of HIV-1 drugs and have a detectable viral load after receiving a failed regimen are randomly assigned at a ratio of 2:1, and continue to receive the failed regimen. At the same time, he received oral lenacapavir or placebo for 14 days (functional monotherapy). Among the 24 patients randomly assigned to lenacapavir, the median baseline viral load was 4.2 log10 copies/ml, and 67% of patients had CD4 counts below 200/μl. The primary endpoint of the study was the proportion of patients whose HIV-1 RNA level had fallen by ≥0.5 log10 copies/ml from baseline at the end of the functional monotherapy period.

The data for the 14-day functional monotherapy period was announced at the 2021 Retroviral and Opportunistic Infection Conference (CRIO) in March this year. The results showed that at the end of the 14-day functional monotherapy, compared with the placebo group, a statistically higher proportion of patients in the lenacapavir treatment group reached the primary endpoint of a viral load reduction of ≥0.5 log10 copies/ml (88% vs 17%, p<0.0001). In addition, the average decrease in viral load in the lenacapavir treatment group was significantly higher than that in the placebo group (-1.93 log10 copies/ml vs -0.29 log10 copies/ml, p<0.0001).

Mechanism of action of lenacapavir (GS-6207)

The data for the first 6 months (26 weeks) has been submitted to the FDA as part of the NDA, showing that patients who received lenacapavir+ optimized background regimens maintained a high virological inhibition rate within 26 weeks: since the first subcutaneous injection Among patients who reached the 26th week after lenacapavir, 73% (n=19/26) achieved an undetectable viral load (<50 copies/ml). These data will be announced at an upcoming meeting.