How many hours is appropriate to sit every day in case causing sickness?

Get up for 5 minutes from 30 minutes to 1 hour to save blood sugar and metabolism!

Since the COVID-19 epidemic entered the global pandemic stage, most people’s otherwise insufficient physical exercise time has been worsened. As a metabolic disease, diabetes is extremely sensitive to physical exercise.

This year’s American Diabetes Association (ADA) annual meeting set up several sessions to discuss physical exercise. Researchers have also racked their brains in order to let everyone sit less and move more and reduce the metabolic damage caused by resting state: The most effective exercise time period makes you do more with less; I’m afraid you don’t have time to give a 5-minute plan; if you really don’t want to exercise-some people have calculated how long it takes to get up and move at the minimum…

“Get up, don’t sit for a long time! Nothing is worth sitting for so long!”

Professor David Dunstan from the Baker Heart and Diabetes Institute in Australia specializes in the topic of “sedentary injuries and how to combat sedentary injuries”. His advice is for young and old people in today’s society. Both healthy people and patients with metabolic diseases have great reference significance and feasibility. 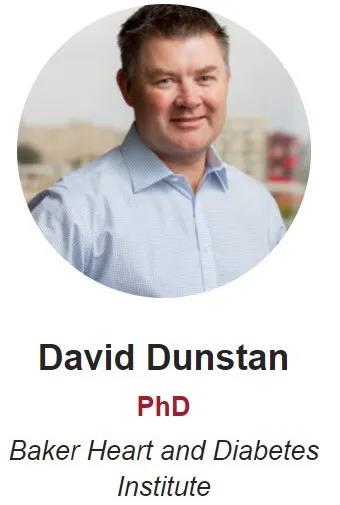 This sitting posture-related risk mechanism diagram released by Professor Dunstan may have pierced the hearts of many people, giving people a feeling of “hateful, don’t peep into my life”. However, the truth behind this picture is even more warm…no, heartbreaking.

The professor’s own research found that sitting for long periods of time damages vascular endothelial cells and smooth muscle cells, leading to impaired vascular function and high blood pressure. At the same time, it affects the overall metabolism, which will undoubtedly increase blood sugar. Finally, cerebral arteries The thickness of the wall also thickens with prolonged sitting, bringing the “time bomb” of cerebrovascular disease into the room.

So, how long is sedentary? There are two comprehensive measurement standards for this problem: first, the time of continuous sitting and inactivity reaches 1 hour; second, the total sitting time per day exceeds 5 hours, which is the place pointed by the arrow in the figure below. The calculated danger line. 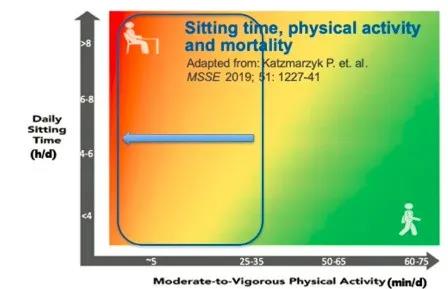 Observations found that those who did not exercise much before the epidemic had been sitting for longer periods of time during the epidemic. In physical exercise and sedentary surveys, diabetic patients were originally high-risk groups. Before the epidemic, three-quarters of diabetic patients could not achieve the amount of exercise recommended by the guidelines, and one-third did not do any exercise at all—and every time. The average length of sitting for a long time is still the longest, reaching 10.1 hours. 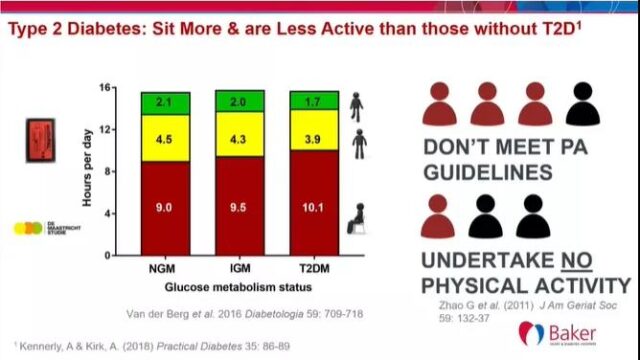 This result is quite tragic. Let alone sitting for 10 hours, just sitting for 7 hours from 9 am to 4 pm can make the blood sugar control situation and the people who get up frequently active can be qualitatively improved. gap. The following figure uses continuous blood glucose monitoring to compare 24 adult type 2 diabetic patients with similar baseline data in sedentary and frequent activity (about 5 minutes of activity every half an hour, divided into a 5-minute walk group and a 5-minute physical exercise group ) The difference in blood glucose control in these two cases. 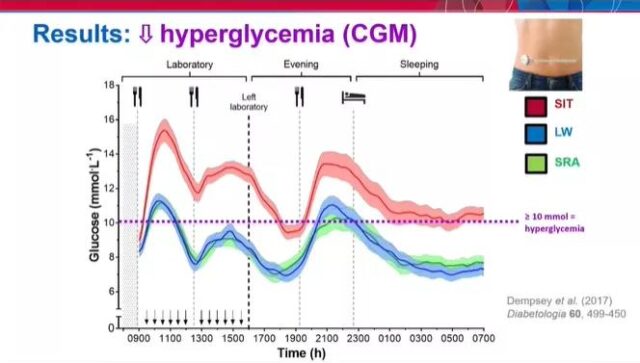 As shown in the figure, the three meals and sleep of the two groups of people are the same. The blood sugar of the sedentary group is shown as a red line, and the green and blue lines are shown for frequent activities. It can be clearly seen that the sedentary group is almost always in a hyperglycemic state with blood sugar greater than 10mmol/L during the day, and the subjects who get up and exercise only have short-term hyperglycemia after breakfast and dinner (and this phenomenon It can also be improved by changing the time window for eating).

then what should we do? Some people may say, “My job is to sit,” or “I can’t accept long-term exercise.” It doesn’t matter, these things, the ADA group of experts in research and training have been worrying about them.

First of all, if you are a sedentary type at all, concentrated time exercise can’t even make up for the damage of sedentary — note that this does not tell you to give up exercise or not to exercise, it just means that sitting for a long time is too toxic. It can’t be completely defeated by exercises that are independent time modules such as “workout after work” or “morning exercise”.

Professor Dunstan introduced that in a controlled study, the researchers divided 19 type 2 diabetic patients with baseline data of HbA1c (HbA1c) less than 10%, who had not been treated with insulin and had less than 2.5 hours of physical exercise per week, into three groups. Group-one group sits for 13.7 hours, stands for 1.6 hours, and walks for 0.9 hours per day (control group); one group sits for 12.5 hours, stands for 1.6 hours, walks for 1 hour, and does physical exercise for 1.1 hours; the last group sits every day 8.9 hours, standing for 4.1 hours, walking for 3 hours. It should be noted that the frequent standing and walking of the last group is inserted into the sitting process. 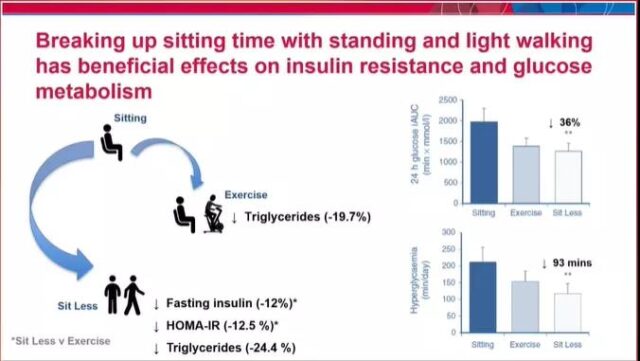 After the above situation lasted for 4 days, the researchers counted the metabolic indicators of the three groups of subjects, and found that compared with sedentary people who only increased by 1.1 hours of intensive exercise, their triglyceride levels decreased by 19.7 compared with the control group. %, the duration of hyperglycemia also decreased relatively; however, the group that reduced sedentary and frequent activities had a 12% drop in fasting blood glucose index, a 12.5% ​​drop in insulin resistance index (HOMA-IR), and triglyceride The level of esters dropped by 24.4%, and a greater reduction in the duration of hyperglycemia was achieved, an average of 93 minutes per day relative to the control group.

Therefore, Professor Dunstan believes that every 30-60 minutes, getting up and moving for 5 minutes-walking, doing squats or other exercises is a relatively mild and easier way to achieve-after all, there is no need for special vacancies. 1 hour or more to complete continuous physical exercise. 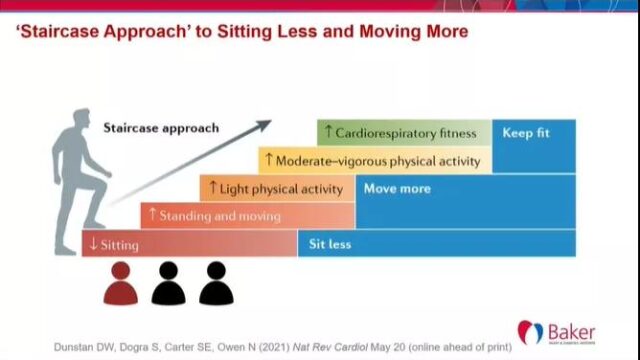 This step-by-step method is more adaptable and very efficient for people who think they are not suitable for physical exercise or who have to sit for a long time due to work reasons.

Of course, as this ladder diagram wants to express, the ultimate goal of Professor Dunstan’s hope is to achieve better health through adequate physical exercise, from reducing sedentary to standing up activities to increasing light weight physical exercise , To moderate to vigorous physical exercise, to adequate cardiorespiratory fitness.

5 minutes can have a big effect

If it is difficult for you to use the time other than getting up and walking every half hour to exercise alone, and you want to exercise for better results, or you don’t want to take 1 hour a day to increase exercise after gradual progress, then, University of British Columbia, Canada (University of British Columbia) Professor Jonathan P. Little’s exercise program can be used for your reference-high-intensity interval training (HIIT).

The full name of HIIT is High Intensity Interval Training, how do you define it? Professor Little pointed out that many people misunderstand HIIT as “full intensity”, but this is not the case. If full intensity is probably the intensity of your escape or the intensity of chasing the bus because you are late, HIIT is at least two levels lower than this intensity. . 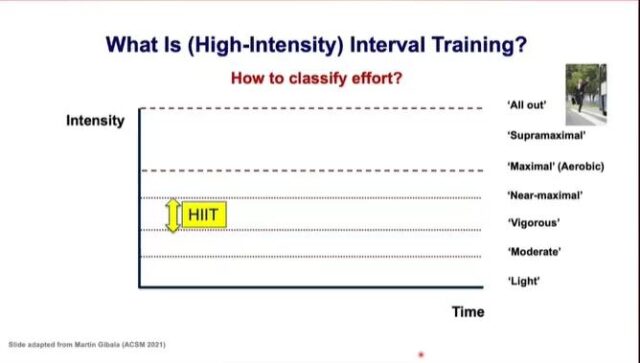 It is difficult for many people to self-test VO2 Max (some hospitals have this project), but now the equipment for continuous heart rate monitoring is more popular. You can check your usual exercise volume for yourself-many people are far from reaching moderate intensity exercise Level, that is, the heart rate reaches 64% of the maximum heart rate, and it needs to reach 150 minutes per week.

The advantage of HIIT is that it does not take so long. It may be possible to set aside 5 minutes a day to reach the target, and you can get cardiovascular and metabolic health benefits similar to longer jogging. In addition, Professor Little introduced that muscles, as a great tool for blood sugar control, are easier to exercise and produce more muscle fibers in HIIT. According to his estimation, jogging can use roughly 60% of the leg muscles, and HIIT is effective The leg muscles can be used more efficiently. 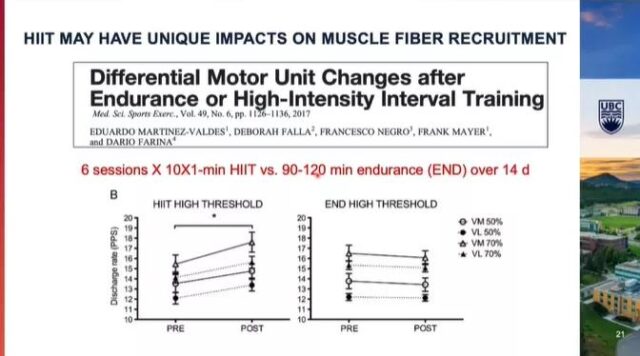 The research shown in the figure above also confirms this trend, that is, HIIT may be an independent factor in increasing muscle fibers. However, Professor Little also pointed out that HIIT is not all about sports. He does not oppose people jogging. The combination of HIIT and other exercises will undoubtedly have better benefits.

In addition, Dr. Dale Bond announced the results of his research on the best exercise time in the section “When of the day is the most cost-effective exercise”. After investigating various groups of people, he noticed that people who exercise in the morning are the most efficient. This is mainly because people who choose to exercise during this time period will generally not be disturbed by other things at this time, and can be more concentrated and effective. work out. Those who choose to exercise in the evening or other times may be disturbed by life or work factors, and may decline in physical fitness and lack of exercise energy after a tiring day. (At this time, the editor who can only take time to exercise at night feels bitter…) 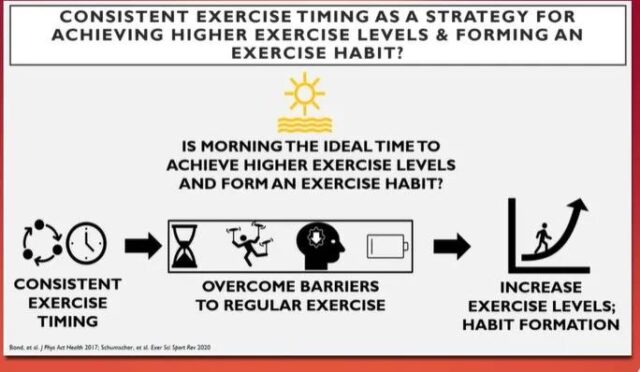 No, some studies have found that standing for a long time will cause vascular damage. The key to this problem is to get up and move, not to stay at rest for a long time. Don’t try to replace one resting state with another, but use an active method to change the state frequently every day.