The prospect of CAR-T cell therapy for the treatment of Multiple myeloma (MM).  As bb2121 is approved by the FDA, research to clarify the potential resistance mechanisms and evasion methods is essential. Improvements to these CARS, such as making them bispecific, usually require BCMA as the accompanying target antigen.

Synthetic biology is essential for designing more effective CAR T cells that target BCMA. However, maintaining tumor-associated BCMA expression and preventing antigen loss are necessary for their effectiveness. In this case, pharmacological methods have been explored. Gamma-secretase inhibitor (GSI) treatment can increase the density of BCMA on the tumor surface, while reducing the concentration of sBCMA and increasing the anti-tumor activity of CAR T cells [85,86].

It is currently studying oral GSI and CAR T cells in a phase I trial (NCT03502577). Among the 10 evaluable patients, 30% and 50% achieved sCR/CR and VGPR, respectively [85,87]. Interestingly, all-trans retinoic acid (ATRA), which is reported to rescue daratumomab sensitivity by increasing CD38 expression, has also been found to enhance BCMA expression and enhance its effect on BCMA-CAR T through epigenetic regulation. Recognition of cells [86]. The combined treatment of ATRA and GSI results in a higher BCMA density on MM cells, thereby maximizing reactivity.

Similarly, we must first clarify the uncertain concept of the importance of baseline BCMA in conferring responsiveness. It is not only necessary to determine the percentage of plasma cells with BCMA positive, but also the knowledge of the antigen density in each BCMA+ cell is crucial to distinguish the BCMA threshold responsible for effective CAR T cell recognition.

Recently, there have been new attempts to take advantage of the success of anti-CD19 CAR T therapy. A new CD19 fusion protein model was developed to reactivate the targeting of recurrent NHL and HER2-positive solid tumors with low CD19 expression [90]. In the case of the successful production of artificial CD19 expression on the surface of these CD19 low/negative tumor cells, effective CD19-specific CAR T cell-mediated cytotoxicity was observed.

MM can also consider this innovative strategy (Figure 5). In this case, the decoy CD19 antigen can be designed on the surface of myeloma cells by constructing a CD19-BCMA (or any other specific MM antigen) antibody complex, and the BCMA arm is connected to the tumor antigen. Overexpression of synthetic CD19 on MM will allow us to target CAR T cells (Kymriah or Yescarta) with commercially available CD19 that has been proven to be highly specific and potent. 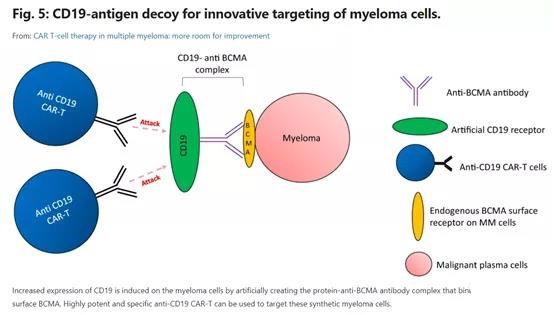 The current standard of care has proven that the combination of multiple drugs for different mechanisms is a more effective method of disease management. However, research on the combination of BCMA CAR T therapy and multiple anti-myeloma drugs is quite limited. Preclinical studies combining CAR T cells with lenalidomide found that lenalidomide can enhance the durability and activity of the former [91,92]. Another study reported that the inhibition of BCMA by the new BCMA-targeted ADC (MEDI2228) can act synergistically with bortezomib in drug-resistant MM cells [93].

Various signal inhibitors such as BRD4i and MEKi have been shown to enhance the function of CAR T cells by blocking their immunosuppressive effects, but these have never been studied in myeloma 94,95. In a drug combination study, people can investigate whether a drug is added to CAR T cell infusion or for maintenance after CAR T treatment, which may be useful for patients with a huge burden of MM.

To date, the impressive results of CAR T cell therapy trials in advanced and heavily pretreated MM patients have raised the question of whether CAR T cells should be used as early therapy. The lower disease burden of newly diagnosed or early disease may represent a higher chance of achieving tumor clearance. In these cases, CARs with CD28 rather than 4-1BB costimulatory domains may be a better choice because they trigger a faster immune response.

The rapid activity of CAR T cells equipped with CD28 will help to produce therapeutic effects quickly, thereby better controlling the disease at an early stage and preventing progression. For high-risk patients (such as heavy blows or functional high-risk myeloma), even with modern treatment strategies, the disease usually progresses rapidly, which seems more critical. The KarMMa-4 trial (NCT04196491) has begun to try to study the effect of bb2121 in high-risk newly diagnosed patients [96].

In addition, myeloma has long been associated with defective T cells in number and function, especially in progressive, refractory diseases. Obtaining T cells from healthy donors is an attractive solution to the problem of insufficient and inferior CAR T cells. Some known allogeneic compounds in MM have been approved by the FDA, namely UCARTCS1 (SLAMF7), CTX120 (BCMA), ALLO-715 (BCMA), CYAD-211 (BCMA) and PBCAR269A (BCMA) [97, 98].

These products use different technical concepts, including non-gene editing methods to eliminate TCR (CYAD-211) and single-step platforms to knock out CAR while knocking out TCR (PBCAR269A) [99]. Another BCMA allogeneic compound (ALLO-605) under preclinical evaluation combines additional chimeric features to enhance cytokine signaling 100. In addition to solving T cell quality issues, the ready availability of these products also means that we can bypass the long and complex self-manufacturing process, thereby achieving faster first-line treatment.

The continued availability of these allogeneic CAR T cells will help eradicate residual malignant cells without the need for multiple rounds of painstaking autologous T cell collection from patients. In short, a cell bank with universal CAR T cells for allogeneic cell transfer will provide greater flexibility in applications and deliver faster to patients with lower cost-intensive manufacturing.

Recently, CAR NK has gradually attracted attention in myeloma because of its better safety, versatility of killing mechanism, and lower risk of GVHD, thereby improving the feasibility of allogeneic manufacturing, which translates into cost-effectiveness. 101. Several preclinical studies have demonstrated that the use of CAR NK cells has cytotoxic activity and MM growth inhibitory effects on various targets, including CS1, CD138, BCMA and NKG2D ligand 102. There is currently an ongoing BCMA-CAR NK Phase 1/2 study (NCT03940833) in the RRMM.

In addition, using the stem cell reprogramming system, an innovative CAR NK model was generated from induced pluripotent stem cells (iPSC), which contains a recombinant IL-15 signaling complex. Good synergy with moAb drugs (daratumumab, elotuzumab and anti-CD19) has shown therapeutic efficacy 103. With the reports on the safety characteristics of CAR NK cells relative to CAR T cells, we envision that CAR NK therapy research in MM will gain more and more interest, which will allow the diversification of MM cell therapy product portfolios, despite its potential The disadvantage is also that the weighing is cautious.

In addition to bioengineering and various clinical tests, basic mechanism research is also important because it provides insights into the basics of the immune response. Understanding the basic biological characteristics of T cells will enable us to produce “fitter” CAR T cells with enhanced proliferation and longer durability. With the advancement of CRISPR-Cas9 technology, a genome-wide screening process can be performed to identify new genes. For example, when manipulated, the flexibility and capacity of CAR T cells can be enhanced.

Epigenetic mechanisms such as chromatin accessibility, DNA methylation status, RNA landscape in T cells, immune analysis, and identification of immune checkpoint features are some of the key areas for further research. Recoding T cell behavior through gene knock-in/knock-out methods will help solve the problems of innate T cell defects and inefficient effector cell pools. In order to understand the disease recurrence in the highly heterogeneous MM cell bank, the emergence of single-cell sequencing technology may help us have a high-level understanding of the genetic and epigenetic temporal evolution of immune cells.

Recent single-cell studies in patients with plasma cell leukemia have revealed different CAR T cell subpopulations with different expression, proliferation, and cytotoxicity, indicating stage-specific changes along the developmental trajectory [104]. Considering this and the heterogeneity of MM, it will be interesting to observe how different genomics and transcriptomics (such as different TC classes and RNA editing characteristics) determine the expression of surface targets that can be used for immune targeting.

In addition to basic biology, in vitro and scaling processes also play an important role in CAR T cell production [37]. The logistical factors involved in the lapse of time between apheresis and the return of manufactured CAR T cells to the patient are critical, as the current 2-4 week turnaround time makes CAR T cell therapy unsuitable for patients with rapidly progressing diseases.

An emerging technology to solve this lengthy manufacturing problem is GraCell Bio’s proprietary FasT CAR platform, which can achieve product release within 22–36 hours, using accelerated protocols to activate and transduce T cells without further in vitro expansion . Using this platform, a dual BCMA-CD19 CAR T treatment was developed, and the first study in humans showed that the effective ORR105 was 93.8%. Such a discovery should be a precursor to further identifying key bottlenecks in the entire CAR T cell manufacturing pipeline (Figure 4) and optimizing steps to reduce costs and cumbersome processes. 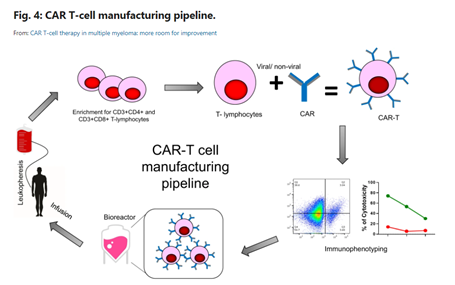 Since the first BCMA-targeted CAR was developed in 2013, MM’s CAR T cell field has indeed made considerable progress. In our continuous pursuit of the development of personalized medicine, CART cell therapy may be the ultimate, personalized rather than using the patient’s own immune system to destroy tumor treatment.

BCMA has received the “Holy Grail” recognition in the field of myeloma CAR T cells, and this product may have the same range of success as CD19-targeted CAR in lymphoma and ALL. CAR T cells are considered a “living drug” because as long as there is a targeted tumor antigen, they will be induced to make the therapeutic effect sustainable. If its effect is long-lasting, we are likely to be giving patients lasting relief. We have every reason to be hopeful and optimistic that CAR T cell therapy will one day make MM a chronic but highly controllable and curable disease.