​The evolutionary history of tumor immunotherapy!

As early as 1777, people tried to inject various pathogens to elicit an immune response against tumors. In 1891, William Coley, known as the “father of immunotherapy”, completed the first successful experiment. He injected streptococcus into patients with metastatic soft tissue sarcoma and observed the tumor regression.

Early discovery in the field of tumor immunotherapy is the role of cytokines. In 1974, the T cell growth factor: IL-2 was discovered. IL-2 is produced by a variety of cells such as CD4+ and CD8+ T cells, and plays a key role in T cell differentiation and growth, immune memory, and maintenance of regulatory T cells to prevent autoimmunity.

IL-2 was later cloned in 1983 and studied in a mouse model, and it was found that it can promote the regression of metastatic malignant tumors such as syngeneic sarcoma and melanoma. This eventually led to the FDA’s approval in 1992 for the treatment of metastatic kidney cancer, making IL-2 the first cancer immunotherapy drug in humans. However, IL-2 also has obvious toxicity, including capillary leak syndrome and multiple organ dysfunction, which limits its application. 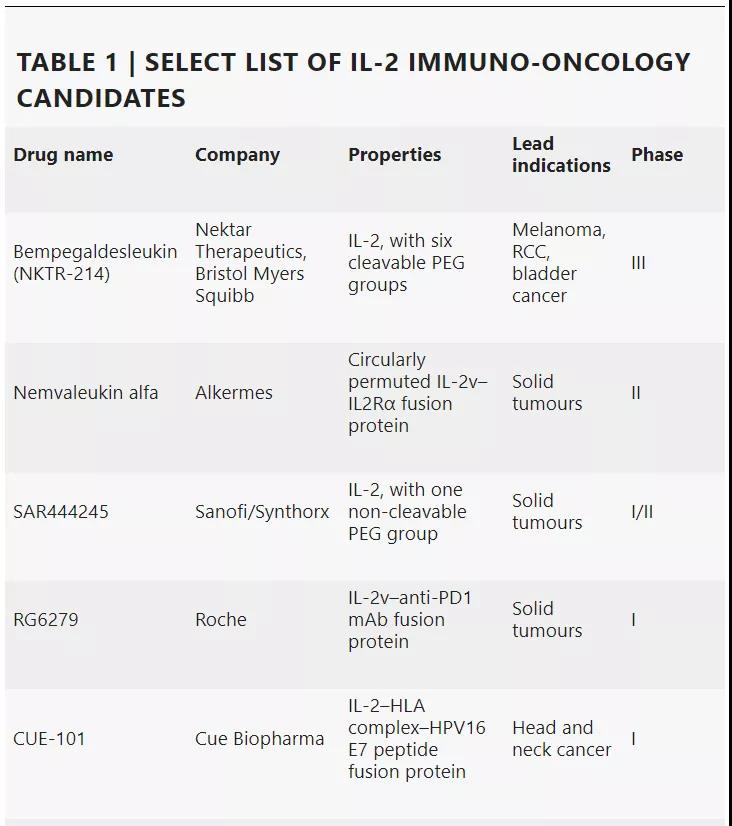 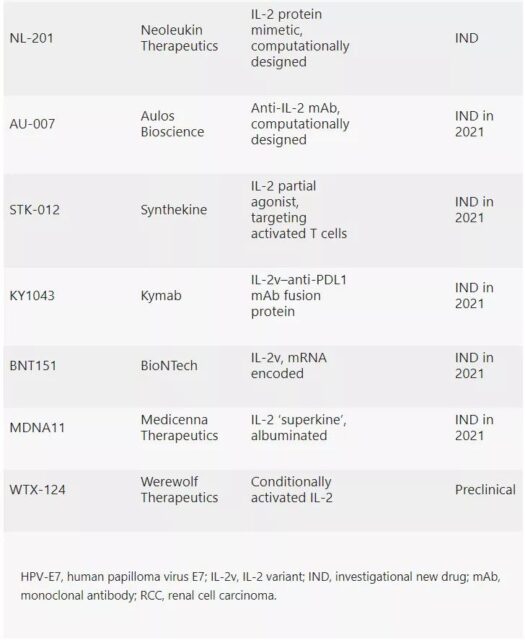 Soon after IL-2 was approved, checkpoint inhibitors came to the forefront of cancer research.

The discovery of cytotoxic T lymphocyte-associated antigen 4 (CTLA-4) paved the way for the discovery of all checkpoint inhibitors in the future. CTLA-4 is expressed on T cells and helps control immune activation and host damage.

This checkpoint was discovered by James Allison. In 2011, ipilimumab was approved for the treatment of metastatic melanoma and became the first checkpoint inhibitor. Ipilimumab is an anti-CTLA-4 monoclonal antibody that directly blocks CTLA-4, opening up a way for downstream T cell activation, proliferation and ultimate tumor destruction. 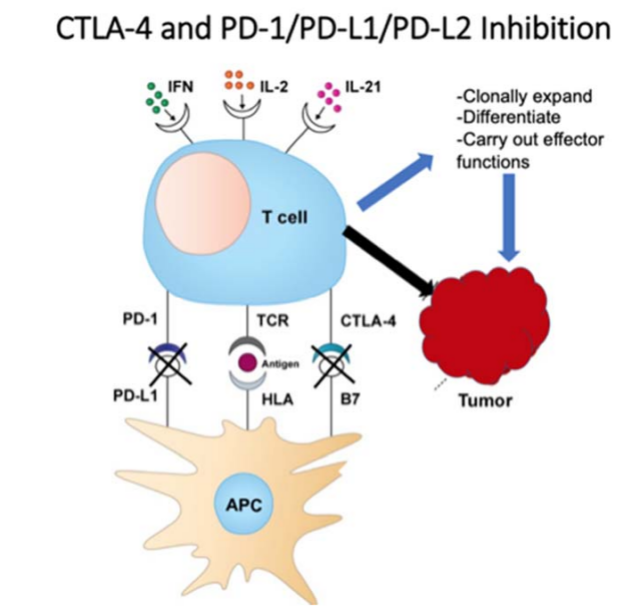 After the discovery of CTLA-4, Ishida et al. discovered programmed death receptor-1 and programmed death ligand-1 (PD-1/PD-L1) in 1992. Currently, there are a variety of approved PD-1 inhibitors, including pembrolizumab (Keytruda), nivolumab (Opdivo), and cemiplimab (Libtayo), as well as PD-L1 inhibitors atezolizumab (Tecentriq), avelumab (Bavencio), and durvalumab (Imfinzi) . PD-1/PD-L1 inhibitors have become the cornerstone of tumor immunotherapy.

Combination therapy with checkpoint inhibitors, such as simultaneous blockade of CTLA-4 and PD-1, can inhibit tumor development through different mechanisms. At present, the FDA has approved the combination of ipilimumab and nivolumab to treat a variety of malignant tumors, including the first-line treatment of NSCLC with PDL-1 expression> 1%. However, increased toxicity is still an obstacle to many combination therapies.

At present, more than 2000 trials of PD-1/PD-L1 inhibitor combination drugs for various malignant tumors are underway, highlighting the great concern for this breakthrough therapy.

The concept that cancer cells express certain potential target antigens paves the way for humanized antibodies as a treatment strategy for malignant tumors. Antibodies can interact with immune cells through the Fc domain of antibodies to target and destroy tumors that express specific antigens.

Kohler and Milsten won the Nobel Prize in Physiology or Medicine in 1984 for their hybridoma technology. This breakthrough has promoted the development of many anti-tumor monoclonal antibodies and has greatly affected cancer treatments in the past decades. The first antibody in tumor therapy is still widely used: rituximab.

Antibody-conjugated drug (ADC) is a very effective strategy. It couples cytotoxic small molecule drugs to monoclonal antibodies through a reasonably constructed linker, which can selectively deliver effective cytotoxic drugs into tumors. . Kadcyla (T-DM1), which couples the microtubule disrupting agent emtansine to trastuzumab. This antibody-conjugated drug is internalized into the cell after binding to the HER2 receptor and then acts through degradation, leading to DM-1 Release, which further leads to cytotoxic cell death.

Kadcyla is currently approved for metastatic HER2+ breast cancer after trastuzumab and taxane treatment, and early HER2+ breast cancer with adjuvant therapy after trastuzumab treatment. Antibody-conjugated drugs such as Kadcyla provide promising options for many patients with malignant tumors. Monoclonal antibodies are still one of the most exciting and evolving areas in cancer-oriented therapy.

Chimeric Antigen Receptor (CAR) T cell therapy is the frontier of the treatment of hematological malignancies in recent decades.

In the early 1990s, Eshhar et al. tried to circumvent the limitation of T cell silencing caused by the tumor microenvironment. In doing so, they developed the first chimeric antigen receptor, paving the way for amazing new cancer treatments. The first CD-19-targeted CAR-T cell (Kymriah) was approved in 2017 for relapsed refractory acute lymphoblastic leukemia. CAR-T cells are bringing revolutionary changes to the treatment of hematological malignancies because they show a response rate of up to 94%.

Although CAR-T cell therapy has been successful in hematological tumors, there are still many limitations in solid tumors. A key factor of this limitation is the tumor-associated antigen heterogeneity of solid tumor cells, which makes it difficult to design a CAR that can successfully combat all malignant cells of a specific cancer. Another difficulty of solid tumors is the ability of CAR-T cells to penetrate the blood, pass through the vascular system, and eventually reach the target tumor.

In addition, although CAR-T cells have high potential, they also have obvious toxicity, including severe cytokine release syndrome (CRS) and severe neurotoxicity. In addition, including the high cost of treatment, it also limits the wide application of CAR-T cells.

Although monoclonal antibodies have become the mainstay of cancer treatment, bispecific antibodies can produce a stronger immune response and a more targeted anti-cancer effect.

Bispecific antibodies (bsab) have two independent antigen binding sites. In T cell-directed therapy, one binding site is used to promote T cells, and the other binding site is attached to tumor-specific antigens. Blinatumomab targets both CD3 and CD19 and was approved for Ph-negative relapsed or refractory B-cell acute lymphoblastic leukemia in 2014.

Both bispecific antibodies and CAR-T cells are used in T cell-directed immunotherapy, and both methods have their own advantages and disadvantages. Although CAR-T cells have a better therapeutic effect on hematological malignancies, they are expensive to treat and require additional training. Compared with CAR-T, bispecific antibodies are “off the shelf”, thus reducing costs and increasing treatment opportunities for many patients. Both CAR-T cells and double antibodies have side effects, including cytokine release syndrome and neurotoxicity.

There are currently two approved cancer prevention vaccines: human papillomavirus (HPV) vaccine and hepatitis B virus (HBV) vaccine. Both vaccines target the HPV16 and HPV18 viruses with carcinogenic potential, which cause 70% of cervical cancer cases.

The use of vaccines for treatment rather than prevention is quite unique in the field of oncology. Bacille Calmette-Guerin (BCG) has been widely used to treat non-muscular invasive bladder cancer (NMIBC) for 40 years.

Current research on tumor immunotherapy vaccines includes personalized vaccines based on neoantigens. Personalized neoantigens are generated from mutations in cancer cells and provide new epitopes. These epitopes are considered non-self and can eventually be identified by immune surveillance.

Previously approved oncolytic virus treatments include Rigvir (2004, Latvia) and Oncorine (2005, China); however, it is worrying that these drugs can cause adverse reactions in healthy tissues. In 2015, Talimogene laherparepvec (TVEC) was the first oncolytic virus approved in the United States. TVEC is composed of herpes simplex virus-1, which encodes two copies of GM-CSF and promotes the activation of dendritic cells. In terms of mechanism, TVEC inhibits the protein kinase-R (PKR) pathway and up-regulates type 1 IFN, which allows the virus to directly attack cancer cells and induce immunogenicity.

At present, TVEC has been approved for advanced melanoma (stage IIIB-IV), which is based on a randomized controlled phase III trial that showed improved ORR and a long-lasting response.

The rapid changes in the field of cancer treatment have highlighted the impact of immunotherapy. Current efforts include re-examining known treatments in new ways, such as combining checkpoint inhibitors with therapeutic cancer vaccines. In the era of personalized medicine, key biomarkers and personalized genome sequencing will lead the personalized development of tumor immunotherapy.

Adoptive cell therapy, including CAR-T, CAR-NK, etc., is currently being studied in solid tumors. However, due to the special characteristics of the solid tumor microenvironment, this is extremely challenging. Combining checkpoint suppression (such as PD-1/PDL-1 blockade) with CAR-T therapy may prove beneficial and is also under investigation.

The evolution of the field of tumor immunotherapy is accompanied by the continuous expansion of the realization and utilization of new drugs. In view of the achievements and breakthroughs in this field, there are still unlimited possibilities in the future.