ACT001 was developed by Accendatech and can pass through the blood. The original innovative drug for the brain barrier is currently undergoing 8 clinical trials around the world, including 6 phase Ib/IIa and phase II clinical trials, covering 5 different indications.

The results of the three reports are the clinical phase I of two treatments for recurrent glioblastoma (rGBM) and the clinical phase I of childhood diffuse endogenous pontine glioma (DIPG). Highlights include the use of a relapsed GBM patient ACT001 monotherapy has achieved long-term complete remission, high-dose ACT001 monotherapy is effective in the treatment of DIPG, and clinical evidence that ACT001 exerts an anti-cancer effect through immunomodulation.

The treatment of brain tumors is very difficult due to factors such as the difficulty of drugs to cross the blood-brain barrier, the heterogeneity of cancer cells, and the strong activity of cancer stem cells. Brain tumors include primary intracranial tumors and metastatic tumors caused by tumors in other parts of the brain.

Nature Cancer reported that about 20% of cancer patients will have brain metastases. Among them, the probability of brain metastasis of lung cancer is high, and the prognosis of brain metastasis is generally poor. At present, whole brain radiotherapy is one of the commonly used treatment methods [1]. GBM is one of the most malignant primary intracranial tumors with a WHO rating of IV. The eldest son of US President Biden, Bo Biden, died of the disease.

The standard drug for the treatment of GBM is temozolomide (TMZ), but it can only extend the median survival time of 2.5 months. Later, the FDA approved bevacizumab, although it can improve the quality of life in the short term, it cannot be extended. Overall survival.

However, DIPG usually occurs in children between 5 and 10 years old. Because the tumor in the brain stem cannot be surgically removed, the clinical prognosis of the disease is extremely poor. The median survival time is only 9-12 months, and the 2-year survival rate is 10%~ 25%, and the long-term survival rate is less than 1%. There is no approved drug for the treatment of DIPG, and even temozolomide has not achieved significant efficacy [2].

The sad story of a 6-year-old American girl Elena Desserich against DIPG [3] has caused great repercussions in the United States, and this heartbreaking story of parents is also played out in China every day.

At the SNO meeting on June 11, 2021, Dr. Dannielle Upton (supervisor David Ziegler) from the Child Cancer Institute of the University of New South Wales, Australia, published the report “ACT001 – a promising therapeutic for diffuse intrinsic pontine gliomas”, which is ACT001 : A drug with potential to treat DIPG [4].

The report not only mentioned the mechanism of action of ACT001, but also tested the activity of primary DIPG cells and the PDX animal model experiment, which demonstrated the targeting of ACT001 to nearly ten typical DIPG cancer cells; it also reported that ACT001 was used in multiple children with DIPG. A clinical response was achieved. One patient’s tumor cell density was greatly reduced, and the quality of life score (KPS score) increased from 50 to 90 (see the figure below, A is the baseline MRI).

For relapsed DIPG, such an effect as monotherapy is extremely rare. To achieve such a curative effect, an ultra-high dose of ACT001 is required, that is, 700mg/m2 in the morning and evening, which is equivalent to an adult taking 2.3-3.1 grams of ACT001 per day, and the side effects of the patient at this dose can be tolerated.

There is currently no serious drug-related occurrence. For side effects, or to reach a dose-limiting toxicity, the Australian hospital has further increased the dose for the treatment of childhood tumors. Among the 7 patients currently enrolled, all 4 in the high-dose group and 1 in the low-dose group received disease control (SD). 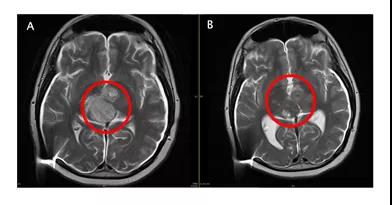 Professor Jason Lickliter of Nucleus Network Hospital reported at the ASCO meeting that as an immunomodulator, the highest dose of ACT001 reached 1200 mg in the morning and evening. So far, there have been no serious drug-related side effects and no maximum tolerable dose.

It is worth noting that a patient with recurrent glioblastoma was enrolled in March 2017 without standard treatment. After ACT001 monotherapy, the tumor slowly shrank until the 19th month of medication. After reaching complete remission. So far, the medication has been used for more than 50 months, and it is still in complete remission. The size of the tumor is 3.91cm X 3.74cm, and the process of complete remission with single-drug treatment without surgery is a miracle [5].

Another ASCO meeting abstract [6]: After a patient’s disease progressed out of the group, he performed a puncture and pathological analysis of a new intracranial lesion. It was found that there were no cancer cells in the new lesion, but lymphocyte infiltration, and macrophages Cells transformed into M1 type, these changes are helpful to control the tumor. The evidence showed that the patient’s disease did not worsen, but a pseudo-progression of the tumor due to immunotherapy.

Due to the late discovery of the phenomenon of pseudo-progression of the disease, patients with stable or improved clinical symptoms but progressed in imaging were all judged as PD (progress of disease) according to the RANO efficacy evaluation criteria, so no further correlation was obtained. data. Therefore, the hospital changed the evaluation standard of ACT001 to iRANO, which is the standard of immunologic drugs, and patients with stable clinical symptoms will not leave the group.

The discovery of this phenomenon also gave researchers a lot of confidence. At present, clinical trials for relapsed glioblastoma in the United States and China use the evaluation criteria of immunologic drugs to evaluate the efficacy. ACT001 has obtained the rGBM orphan drug qualification in the United States and the European Union, and will apply for DIPG’s orphan drug qualification for children in the near future.

As an immunomodulator drug, the clinical trials of ACT001 are not limited to gliomas. Currently, 8 clinical trials have been carried out around the world. Except for pediatric tumors carried out in China and Australia respectively, which are clinical phase I, the other 6 are mainly for observational efficacy. Phase Ib/IIa and Phase II clinical trials, including:

Among them, the Phase II clinical trial of pulmonary fibrosis in Australia is nearly completed and some trial results have been obtained; in China, the corresponding Phase II clinical trial will be applied soon. In the phase I clinical trials of glioma, the patients who benefited often experienced an increase in the peripheral blood lymphocyte index. However, radiotherapy often leads to a decrease in the lymphocytes of the patient and a decline in the body’s immunity. Therefore, clinical trials of combined radiotherapy for the treatment of cancer brain metastases are worth paying attention to the changes in the immune status of patients. If the protective effect of intracranial radiotherapy can be achieved, it may also be extended to other parts of the body for radiotherapy protection.

Why has ACT001 carried out so many clinical trials for different purposes? In fact, immunomodulator drugs often have multiple potential uses. Because of their multi-target synergistic features, they have a wide range of indications. The most representative one is lenalidomide.

Lenalidomide is a derivative of the natural product glutamate, which is widely used in multiple myeloma, leukemia, lymphoma, bone fibrosis and bone dysplasia syndrome, and more indications are in clinical trials.

Lenalidomide is the first to be listed as an orphan drug. After the launch, it has a high market share, high price, and expansion of multiple indications. In 2020, global sales have climbed to 12.1 billion U.S. dollars, ranking the top 5 in global sales. name.

It is worth noting that ACT001’s target of action is not only immune regulation, but also pharmacological effects on non-immune functions. The company’s R&D team is also conducting collaborative research with relevant translational research laboratories in the country where the trial is located to achieve the guidance of clinical trials. purpose.

Due to the simultaneous launch of multiple clinical trials, especially the clinical trials of pulmonary fibrosis and combined radiotherapy for the treatment of cancer brain metastases, the enrollment speed is very fast, and the demand for clinical trial drugs for ACT001 has risen sharply. Accendatech is doing its best to ensure global clinical trials. At the same time as the supply of medicines, large-scale production has also been realized by improving the prescription process. 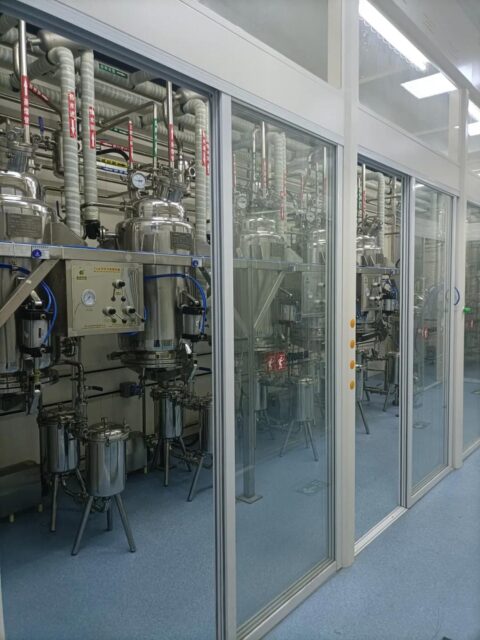 We hope that ACT001, a new type of immunomodulator, will continue to create new miracles and bring new hope to the most desperate brain tumor patients.

In addition, Accendatech has built a drug screening platform that crosses the blood-brain barrier and a cancer stem cell drug development platform, and will continuously output small molecule preclinical drug candidates with new structures. It is expected to declare at least one new small molecule drug clinical trial this year. For the test, 2 items will be declared next year.

Accendatech insists on being original and bravely challenging the most difficult to treat diseases, including brain tumors, pancreatic cancer and organ fibrosis, etc. It reflects the clinical value and social responsibility orientation of its project, and is a pioneer of Chinese biotech companies.