Is it possible to let CAR-T cells getnerate in patient’s body?

Is it possible to let CAR-T cells getnerate in patient’s body?  Direct delivery of therapeutic or related genes into organisms is called in vivo gene delivery. In vivo targeted CAR delivery to T cells will represent a big step forward in the field of cancer treatment.

It is important that CAR transfer in vivo must be specific to target T cells to avoid the risk of transferring and transducing antigen-presenting cells (APC) in malignant cells, which may trigger a transgene-specific immune response, leading to CAR T cells The elimination.

However, freshly isolated T lymphocytes are not sensitive to classical VSV-G pseudotyped lentiviral vector transduction unless they are stimulated by TCR to allow efficient gene transfer [50,154]. This process of transduction and expansion in vitro to produce CAR T cells significantly changes their phenotype and long-term in vivo persistence before infusion.

In addition, ex vivo CAR T cell therapy is still a personalized treatment because it requires the use of high-dose vectors to produce genetically modified autologous cells in vitro. These manufacturing processes are very expensive.

The in vivo administration of the carrier will omit this labor-intensive and expensive in vitro procedure. In short, in vivo gene therapy, including a single injection of a CAR-encoding vector into the bloodstream, may make CAR T-cell therapy more widely applicable to patients.

Humanized mice provide a unique system to evaluate genetic modification of vectors for specific cell types in the body. As mentioned above, immunodeficient NOD/SCID, γc-/- (NSG) mice [155,156] allow high levels of human HSC implantation and reconstitution with human lymphoid immune cells, but they are still refractory in the human bone marrow lineage [157] .

At the same time, improved humanized mouse models have been reported that support better bone marrow differentiation [158,159]. In the future, these will become better models for evaluating the specificity of T cell subtypes transduced by targeted vectors when administered in vivo. However, the current research on CAR T cell engineering in vivo relies on a well-characterized NSG mouse model.

As mentioned above, it would be of great benefit if CAR encoding vectors can be injected directly in vivo to transduce selected cells, such as human CD4+ or CD8+ T cells. By introducing scFv against CD4 or CD8 epitope or design ankyrin repeat protein (DARPIN) into measles virus (MV) glycoprotein H, LV is specifically retargeted to human CD4 and CD8 T cells. These CD4-MV and CD8-MV retargeting vectors showed that in human PBMC in vitro, exclusive genes were transferred to the CD4+ or CD8+ subpopulations of hT cells, respectively.

It is worth noting that in NSG mice with humanized hPBMC targeting genes transferred into CD4+ or CD8+ T cells, systemic delivery has also been confirmed in vivo [160,161]. In addition, CD4-MV LV also specifically targets CD4 T cells in HSC humanized NSG mice [161]. The same research team developed LVs pseudotyped with receptors to retarget Nipah virus glycoproteins (NiV-LVs) [162]. These NiV-LV can be produced at higher titers and will not be inactivated in the body because there are no neutralizing antibodies against Niv in human serum.

Importantly, recently Pfeifer et al. used CD8 T cells encoding anti-CD19 CAR to target NiV-LV to carry out the first step in reprogramming CAR T cells in vivo. A single administration of anti-CD19 CAR encoding CD8NiV-LV in the bloodstream of HSC humanized NSG mice can produce CD8 T cells expressing anti-CD19 CAR in vivo, thereby inducing the elimination of CD19+ B cells in all hematopoietic tissues, Figure 1A [163]. The production of these CAR T cells in vivo is related to the induction of CRS in some mice, similar to patients injected with CAR T cells, which emphasizes the necessity of supplementation and optimization [163]. 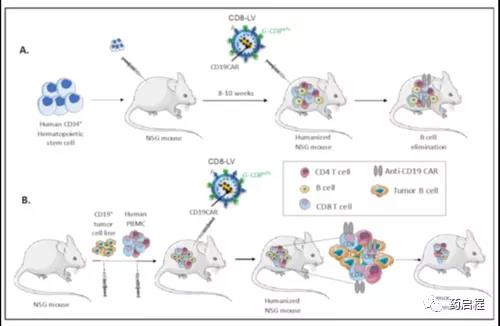 (A) Inject cord blood CD34+ cells into NSG mice and humanize them for 8-10 weeks, and then inject CD8 targeting (CD8NiV)-LV, which encodes a CAR targeting CD19 present on B cells. The mice were sacrificed at 5-12 weeks for FACS analysis of immune cells. CAR expression is only shown in hCD8 T cells and is amplified in vivo by contact with CD19+ B cells. These genetically modified CD8 T cells can eliminate human B cells in different hematopoietic tissues (blood, spleen, bone marrow) after contact;

(B) Xenotransplantation of B cell line into NSG mice, followed by injection of human PBMC. After tumor formation and human immune cell reconstitution, NSG mice were injected with CD8 targeting (CD8NiV)-LV, which encodes a CAR that targets CD19 present on tumor B cells. CAR expression is only shown in hCD8 T cells and is amplified in vivo by contact with CD19+ on tumor B cells. These genetically modified CD8 T cells can eliminate tumor B cells after contact.

Recently, the team evaluated the same CD8NiV-LV, which provided anti-CD19 CAR in NSG mice implanted with CD19+Nalm-6 tumor cells, and then injected human PBMC [164]. A single injection of this CD8-targeted LV is sufficient to eliminate CD19+ Nalm-6 tumor cells, while in control animals, tumor cells expand in an uncontrolled manner [164].

Surprisingly, they also detected anti-CD19 CAR expression on the surface of NKT cells in vivo, because these cells also express the CD8α chain, which is the target of CD8NiV-LV particles. This study provides for the first time clear evidence for the production of anti-CD19CAR T cells in a cancer xenograft model (Figure 5B).

Although in this case, humanized mice are very useful as preclinical models for in vivo evaluation of vectors targeting specific immune cells, we must be careful to translate these results directly to patients because these mice lack fully functional Human immune system. Obviously, before conducting clinical trials of in vivo CAR T cell gene therapy, further testing is required in immunocompetent models (for example, non-human primates) [165].

The CAR-T cell field is actively looking for ways to solve these obstacles through a variety of creative methods, including gene editing technology and the generation of CAR T cells in vivo, to improve the accessibility of CAR T cell therapy to more patients. In the future, improved mouse models that simulate human hematopoietic and immune responses [166] will help the field solve otherwise unresolved problems.