How to use Monolith process to prepare high-purity mRNA?

How to use Monolith process to prepare high-purity mRNA?  Looking at human history, the rapid spread of severe infectious diseases such as SARS, Ebola, Zika, and COVID-19 pneumonia that have occurred in recent decades has highlighted the urgent need for the world’s ability to respond quickly to pandemics.

In this regard, the feasibility and effectiveness of the vaccine development path is no longer a bottleneck, and how to produce vaccines at low cost, faster development speed and large-scale safe production has become the top priority. Nucleic acid vaccines, namely DNA and mRNA vaccines, have shown clinical potential to meet global health challenges.

According to WHO’s disclosure, of the 163 new coronavirus vaccines currently under development in the world, nucleic acid vaccines account for about 48% (including recombinant virus vector vaccines), which is expected to play an important role.

The mRNA vaccine breaks the traditional immune activation model of inactivated and attenuated vaccines, and innovatively uses the body’s own cells to produce antigens to activate specific immunity. The mRNA vaccine has a very high effective protection rate, and at the same time has a higher safety than other innovative vaccines (such as DNA vaccines, viral vector vaccines). In terms of research and development, mRNA vaccines can be updated and iterated quickly to cope with constantly emerging mutant strains. Since the mRNA vaccine does not need to be translated in vitro, the production process is also shortened, which only takes 60-70 days.

Especially the mRNA vaccine, Moderna TX’s mRNA-1273 vaccine and Pfizer Biotechnology’s BNT162b2 vaccine have been very effective against the speed of the COVID-19 pandemic. The mRNA vaccine has overturned the development path of traditional vaccines and is opening a new era of vaccines.

In the mRNA field, in addition to designing and optimizing mRNA sequences and developing efficient and safe delivery vectors for mRNA vaccines, the development of simple, rapid, large-scale and economical mRNA preparation processes is also one of the most important innovations in mRNA vaccine technology. mRNA purification requires the removal of synthetic raw materials and mRNA impurities, such as suspended short transcription, double-stranded RNA, and aggregates. The technology to do this is also evolving. Like protein purification in the past, the mRNA field is shifting from precipitation methods to chromatography methods.

BIA, the leader in Monolith chromatography. Monolith chromatography (Figure 1) uses a highly interconnected network of large channels for convective mass transfer. The channels reach 2-6 µm, which is more than 10 times the size of macromolecular mRNA, so as to achieve ultra-high flow rates and low shear forces at the same time. It is very friendly to the purification of unstable mRNA molecules.

Monolith chromatography has its own unique mRNA preparation process, from E.coli to mRNA, with a complete set of efficient and robust solutions (Figure 2).

It is worth mentioning that after the CIMmultus DEAE monolith capture step, there is no rush to remove the ring and polymer. The experimental results show that both the ring and polymer plasmids can be effectively linearized. Therefore, the relevant impurities only need to be in the mRNA. It can be removed in the previous step of in vitro synthesis. 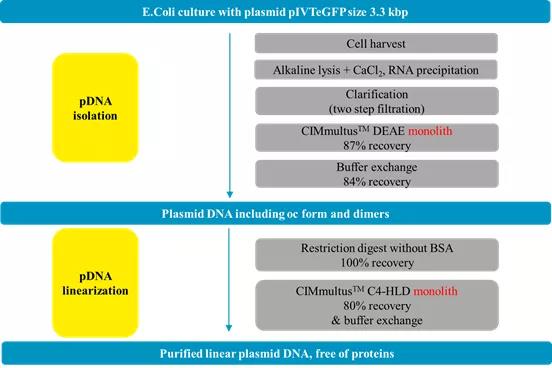 After the high-purity linear pDNA is prepared, the prerequisite steps for mRNA preparation are ready, and the two important sections of mRNA synthesis and mRNA purification have begun. The specific mRNA preparation process flow chart is shown in Figure 4. The in vitro synthesis process of mRNA (including capping reaction) and the purification process of mRNA are almost interspersed.

The in vitro synthesis process of mRNA is extremely important for the overall process of preparing mRNA. The in vitro transcription process, if properly optimized, can help synthesize mRNA samples with high purity and high yield, greatly alleviating the subsequent purification pressure, and is a key step in reducing the cost of the overall preparation process. 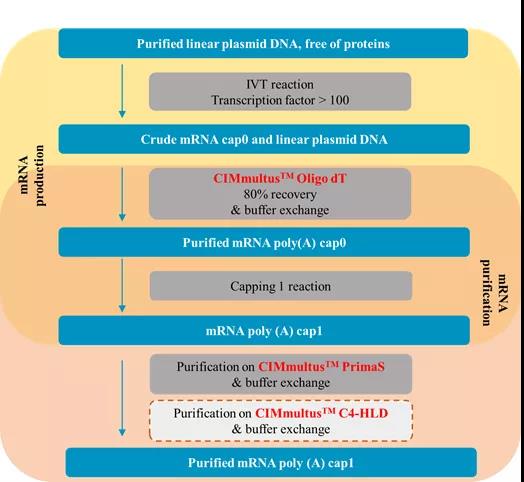 Figure 4. Flow chart of the preparation process of high-purity mRNA

In the CIMmultus Oligo dT chromatography process, the flow rate is fast (retention time is about 1 min), the shear force is small, and the load can be as high as 180 ug/ml, which can effectively remove a large amount of impurities while the yield of this step is as high as 80%.

Elution: Under salt-free conditions, the negatively charged skeleton of Oligo dT and Poly A are electrostatically repelled, and mRNA is eluted under mild neutral pH and low conductivity conditions; 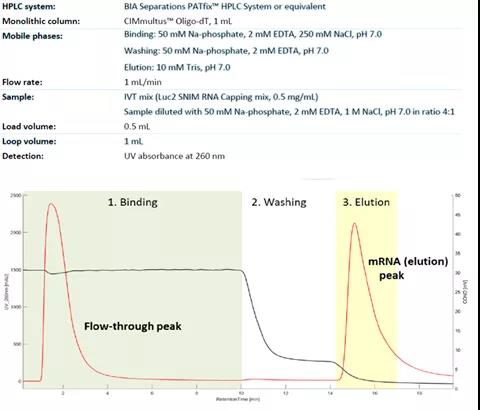 Sample loading: Use the compound mode effect of CIMmultus PrimaS (mainly hydrogen bonding) to effectively bind the target mRNA. During this process, you only need to adjust the pH of the sample to 6.0~8.0, without too much consideration of the sample salt concentration, salt type and sample concentration;

Leaching: high-salt leaching to remove most of the dsRNA, DNA and protein. During the leaching process, chelating agents can be added to further remove residual trace impurities and aggregates, while helping to maintain the pH gradient;

Elution: The mRNA is eluted by a linear gradient of pH 8.0~11.0, and the sample is neutralized immediately after elution to maintain the stability of the mRNA;

In this chromatography process, a high-salt environment balance column can also be used, and guanidine hydrochloride and EDTA are directly added to the sample for high-salt loading, which simplifies the chromatography process and prevents the competition between dsRNA, DNA and target mRNA. Binding to increase the binding capacity of mRNA. 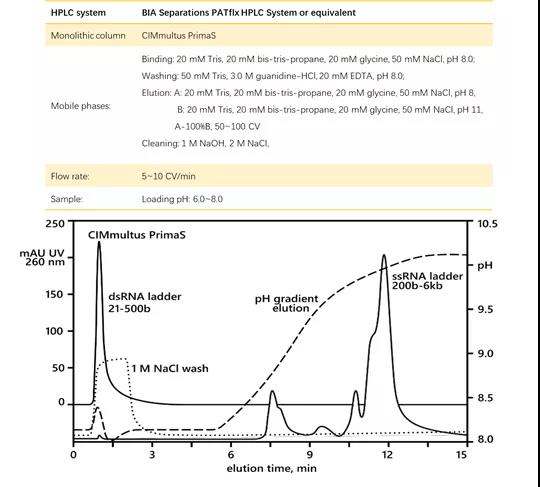 For particularly challenging projects, if necessary, the fine purification of CIMmultus C4 HLD can still be continued (Figure 7), and CIMmultus C4 HLD can be used to further effectively remove residual capping reagents and other process-related impurities through hydrophobic interactions. At the same time, the product-related impurities dsRNA are efficiently removed. This chromatography process is the traditional hydrophobic chromatography, and the specific experimental parameters can be referred to Figure 7. 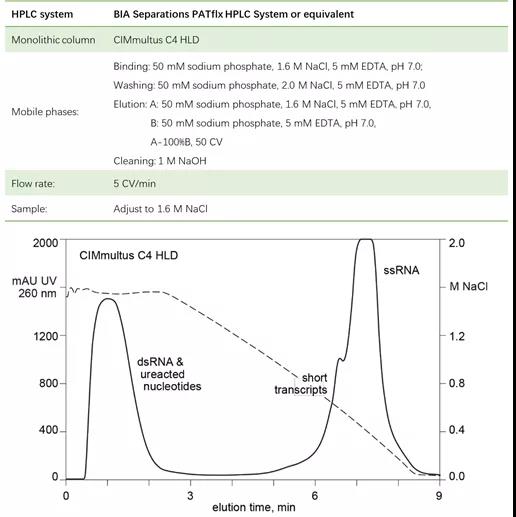 Monolith chromatography process to prepare mRNA, simple and flexible operation, with ultra-high flow rate and low shear force, is particularly friendly to unstable mRNA, it can efficiently remove process-related and product-related impurities, and obtain high-purity mRNA. It is a simple, fast, large-scale and economical mRNA preparation process to maintain a high total yield.