Clinical endpoints in the evolution of the oncology field

Clinical endpoints in the evolution of the oncology field.  With the continuous development of these alternative endpoints, correct design and application will be very important for the approval of future drugs.

At present, a number of clinical endpoints in the field of oncology have been used to seek regulatory approval, including overall survival (OS), progression-free survival (PFS) and objective response rate (ORR). Together with five-year survival, one-year survival, complete remission (CR), and duration of remission (DoR), these are the endpoints traditionally used in tumor clinical trials and are considered to have definite value.

In recent years, with the advancement of science and technology, new drugs have made significant progress in reducing tumor size and delaying tumor growth, which makes them inclined to use more evolving alternative endpoints to support traditional and accelerated tumor drug approvals. An analysis of the traditional and surrogate endpoints of clinical trials for colorectal cancer, multiple myeloma, non-small cell lung cancer, urothelial cancer, and prostate cancer between 2016 and 2020 shows that the most common surrogate primary endpoint is pathological complete response ( pCR), recurrence rate (RR), disease-free survival (DFS), event-free survival (EFS) and disease control rate (DCR) for solid tumors, and minimal residual disease (MRD) for multiple myeloma. The two most widely used surrogate endpoints, DCR and RR, are mostly used for first- and second-line treatment of metastatic disease, while pCR and DFS are the most commonly used primary endpoints in adjuvant/new adjuvant studies.

Although evolving clinical endpoints have been used for regulatory approval, there are still conflicting opinions among payers. Apalutamide was approved based on surrogate endpoints, but HTA’s assessment showed that payers have limited acceptance of such surrogate endpoints. While pembrolizumab used pCR data as the primary endpoint, and OS and EFS data were immature (the expiration date was not reached in clinical trials), the FDA Oncology Drug Advisory Committee (ODAC) unanimously decided to postpone FDA’s approval of pembrolizumab in these indications.

When strong research data shows that these changes can predict clinical outcomes, surrogate endpoints may be most useful. It enables all stakeholders to effectively evaluate the benefits of drugs, while ensuring that treatment is provided promptly to patients who need drugs. These endpoints should be continuously monitored to understand how they evolve during treatment, and new evolving alternative endpoints should be considered where appropriate to allow rapid drug approval.

Definition of clinical endpoints in oncology

Significant advances in cancer care stem from advances in prevention, early detection, drug therapy, and other treatment modalities. To measure these improvements, clinical trials in the oncology field can choose a number of different primary and/or secondary endpoints to measure the benefits of treatment. The “gold standard” is traditionally the median overall survival, and more and more people are also accepting other traditionally used endpoints, including PFS and ORR.

As individuals’ longevity and survival time increase, drugs may not improve these commonly used endpoints. Traditional endpoints often require a large number of samples and long evaluation time, which may stifle innovation and limit the availability of new therapies. Therefore, in the current limited situation of traditional endpoints, it may be necessary to turn to other endpoints to measure benefits.

Traditional FDA approval of tumor treatment requires well-controlled clinical trials to prove its effectiveness and safety, and accelerated approval also requires a large amount of evidence based on the safety and effectiveness of alternative endpoints. Although accelerated approval allows greater use of evolving alternative endpoints to obtain treatment earlier, the product must be demonstrated to be superior to existing treatments, and sponsors must complete post-marketing trials to confirm meaningful clinical benefits .

The trend of surrogate endpoints

Among the most commonly used endpoints approved by regulatory agencies, those that include survival are the gold standard for demonstrating clinical benefit. However, survival analysis requires a large number of samples and may require several years of long-term follow-up to measure median overall survival. Effective post-progress treatment may also confuse or reduce survival.

A similar trend in the use of alternative endpoints is also seen in EU market authorization agencies (MAAs). The most commonly reported (primary or secondary) endpoints in clinical trials are OS (94%), PFS (93%) and ORR (87%). In all applications, OS, PFS, and ORR constitute 34%, 49%, and 22% of the primary endpoint of MAA and 60%, 44%, and 66% of the secondary endpoint, respectively. It is worth noting that the cumulative OS as the primary endpoint of all tumor indications has decreased significantly (an average decrease of nearly 13%), and the rate of OS as a secondary endpoint has increased, which is especially obvious for hematology indications.

The above data indicate that in the United States and the European Union, surrogate endpoints are increasingly being used to evaluate tumor treatments. However, these alternative endpoints are not without shortcomings. For example, the suboptimal positive predictive value of OS has led to skepticism among payers in some countries, such as Germany.

Pros and cons of clinical endpoints 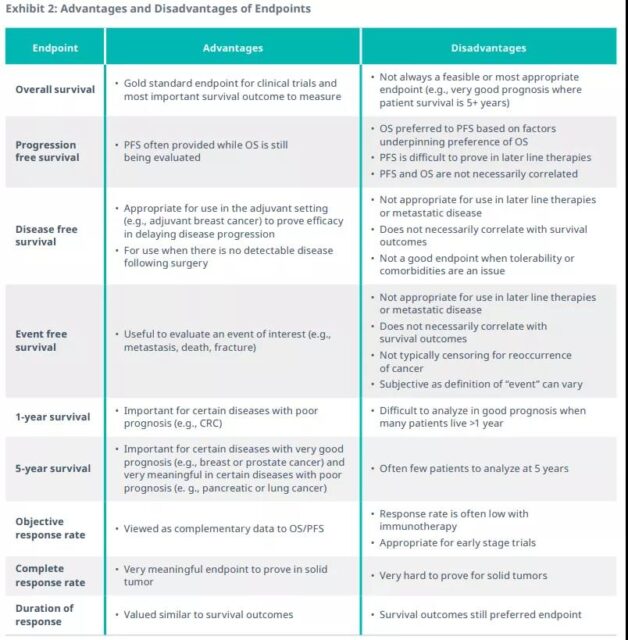 Long-lasting ORR is beneficial to patients because it implies a long-term response to treatment, but it can also lead to some unique regulatory issues, such as:

1. How can the unprecedented high ORR and response duration adapt to the current approval model?

2. When is a randomized trial in a control group not needed, and when is it necessary to follow up with real-world evidence?

In addition, the strength of the association between ORR/CR and FPS/OS varies greatly among different studies, so it is difficult to determine a consistent pattern. The use of surrogate endpoints requires the payer to infer and estimate the true benefits to the patient, which leads to uncertainty in economic value. What is more complicated is that surrogate endpoints may not necessarily provide the same results as the final result for the comprehensive benefit risk prediction of the product. Gefitinib proved the problem. The technology was initially licensed for non-small cell lung cancer, but it was later found to have no benefit in terms of overall survival, and the license was subsequently restricted. Such examples make German payers less confident that alternative endpoints can provide important conclusions.

Evaluation of Surrogate Endpoints in Oncology

In ongoing clinical trials, 25 evolving endpoints have been identified as the primary endpoints for Phase II and Phase III. Pathological complete remission rate, recurrence rate, disease-free survival, event-free survival, and disease control rate are the most common primary surrogate endpoints in clinical trials from 2016 to 2020. Minimal residual disease is the most common primary endpoint for the evolution of multiple myeloma.

Between 2016 and 2020, 17 surrogate endpoints were selected as primary or secondary endpoints in clinical trials with more than 5% of specific indications. Disease control rate and recurrence rate were used for clinical trial endpoints for 25 and 23 indications, respectively. 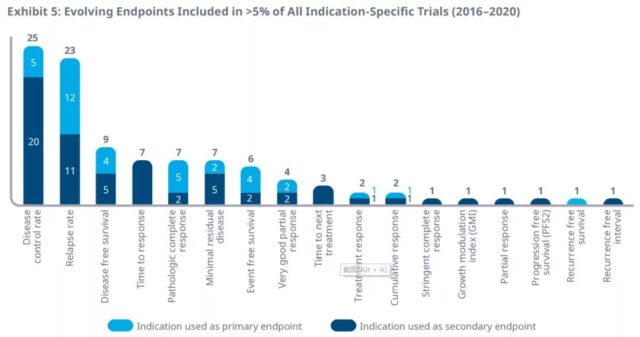 Among them, the annual incidence of the first 9 surrogate endpoints in clinical trials from 2016 to 2020 is as follows. Compared with 2016, the annual use of minimal residual disease (555%), disease-free survival (78%), pathological complete response rate (53%) and disease control rate (43%) in clinical trials in 2020 will increase most.

Pathological complete response and disease-free survival are the most commonly used surrogate endpoints in adjuvant/neoadjuvant therapy, as primary and secondary endpoints.

In clinical trials of advanced cancer, disease control rate, recurrence rate, and response time are the most commonly used primary and secondary endpoints.

DFS is considered to be a good prognosis in adjuvant/neoadjuvant therapy (overall survival> 18 months) and an appropriate alternative endpoint for efficacy when survival data are immature. pCR is another evolving endpoint, which is suitable for preoperative adjuvant/neoadjuvant therapy or chemotherapy. For treatments with metastatic indications and good prognosis, DCR may be a suitable supporting surrogate endpoint for PFS and immature OS data.

In clinical trials in the field of oncology, these evolving surrogate endpoints should be continuously monitored, and further trials and studies need to show a clear link between surrogate endpoints and long-term survival so that all parties can accept it.

The industry, regulators, and payers all need to continue to think about how to provide the best service to the right patient at the right time. Looking at these alternative endpoints from a new perspective allows all stakeholders to effectively evaluate the benefits of the drug while ensuring that treatment can be achieved. Provide it to patients who need it quickly.