The latest global cancer burden data released by the International Agency for Research on Cancer (IARC) of the World Health Organization in 2020 shows that: in 2020, there were 19.29 million new cancer cases worldwide. One of the most obvious changes is the rapid increase in the number of new cases of breast cancer to 2.26 million, which officially replaced lung cancer (2.2 million) as the world’s largest cancer for the first time, accounting for 11.7% of all new cancer patients.

So why has the incidence of breast cancer increased in recent years?

Recently, a research team led by Ruthann Rudel, a toxicology expert from the Silent Spring Institute in the United States, used the high-throughput in vitro steroid production analysis technology developed by the United States Environmental Protection Agency’s ToxCast program to analyze more than 2000 chemical substances that are often exposed to life, including A variety of pesticides, food additives, hair dyes, consumer products are analyzed. 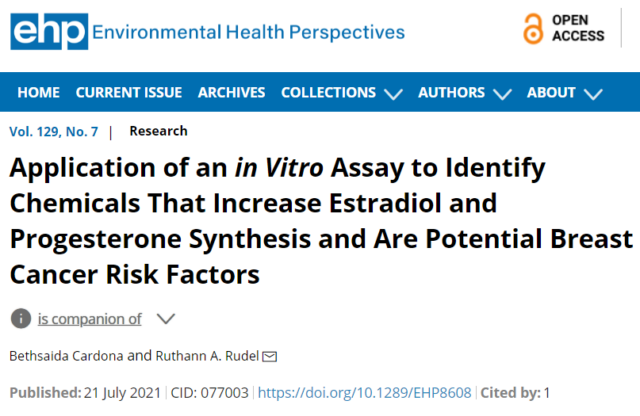 The research was published in the latest issue of Environmental Health perspectives with the title “Application of an in Vitro Assay to Identify Chemicals That Increase Estradiol and Progesterone Synthesis and Are Potential Breast Cancer Risk Factors”.

Regarding the results of this study, Dr. Ruthann Rudel said, “As early as 2002, the Women’s Health Initiative study found that estrogen is closely related to the risk of breast cancer. This study shows that some chemicals currently used can affect estrogen secretion, thereby It has an adverse effect on the risk of breast cancer. Therefore, in the future, you need to be cautious when using products containing these compounds, especially women.”

Breast cancer is currently the most common malignant tumor in the world, and its incidence is still rising. The etiology of breast cancer involves the influence of many factors such as heredity, reproduction, lifestyle and environment.

Although BRCA gene mutations are one of the important factors that lead to breast cancer, only 10%-15% of cases in the clinic can be attributed to this, and most of the causes of breast cancer are still unclear.
Environmental endocrine disruptors refer to exogenous chemical substances that are widespread and persistent in the environment, which can interfere with normal hormone regulation functions by affecting the production of human endogenous hormones or changing the expression of hormone receptors.

Environmental endocrine disruptors are widely distributed and have many types, mainly in food, packaging, chemicals, metals, and pesticides. Previous studies have found that environmental endocrine disruptors are closely related to developmental abnormalities, reproductive disorders, and tumors, and they have attracted widespread attention around the world.

For example, bisphenol A is one of the world’s top industrial synthetic compounds in terms of output, and is widely used in food packaging, nursing and other industries. Bisphenol A enters the human body mainly through diet, skin, and respiratory tract. Its free monomers and active derivatives can be detected in human serum, fat, breast milk, placenta, and fetal plasma.

With the large-scale use of bisphenol A worldwide, people are paying more and more attention to its health effects. A large number of studies have shown that even low-dose BPA exposure can have an impact on human health. At the same time, a series of studies have shown that bisphenol A exposure is closely related to the occurrence of a series of cancers such as breast cancer and prostate cancer. Therefore, as early as 2015, the European Union adjusted the safe dose of bisphenol A from 50 μg/(kg·d) to 4 μg/(kg·d), a reduction of nearly 10 times.

Similar to bisphenol A, most environmental endocrine disruptors cannot be identified as carcinogens due to the lack of large-scale epidemiological data and clear carcinogenic mechanisms. However, some experts said that although the current epidemiological data is not perfect, a series of cohort studies and preclinical studies have shown that the rapid development of human breast cancer is closely related to the large-scale use of environmental endocrine disruptors.

Dr. Ruthann Rudel has long devoted himself to the study of the relationship between environmental factors and breast cancer. In order to determine how chemical factors in the environment affect the occurrence of breast cancer, Dr. Rudel led researchers from the Silent Spring Institute to systematically analyze more than 2,000 common compounds in the ToxCast program of the US Environmental Protection Agency to determine whether these compounds are harmful to humans. Harmful, and what biological changes will be caused by exposure to these compounds.

In the end, Dr. Rudel identified 296 chemical substances from these compounds, which in the experiment would increase the secretion of estradiol and progesterone. Not only that, Dr. Rudel also discovered that these chemicals are involved in all aspects of human life, including daily skin care, hair dyeing, building materials, furniture, food packaging, and so on. For example, dichlorophenol and cyfluthrin are common insecticides and synthetic pesticide components; bisphenol A is a synthetic epoxy resin material commonly used in industry, and is widely used in the coating of baby bottles, cups and medical device packaging; Dinitrobenzene is an intermediate compound of common dyes and is widely used in dye synthesis.

In this regard, Dr. Cardona from the Silent Spring Institute, one of the authors of this article, said, “The mechanism by which these compounds cause estrogen production is not fully understood. It may be because these chemicals act as aromatase activators, leading to increased estrogen secretion. But. We can be clear that women are exposed to these compounds every day.”

Currently, researchers are calling on regulators and manufacturers to face up to the impact of the above-mentioned chemicals on women’s health. At the same time, researchers are also trying to improve the detection methods of chemical substances and optimize the identification and detection of potential carcinogens. In the future, researchers will further promote ways to reduce exposure to these compounds, especially for pregnant women and adolescent women.