T-cell-based TILs (Tumor Infiltrating Lymphocytes) immunotherapy.    CAR-T is currently the most popular area of ​​research. However, although CAR-T has achieved great success in hematological tumors, it still has limited efficacy for solid tumors.

Adoptive therapy with tumor infiltrating lymphocytes (TILs) has shown strong efficacy in the treatment of solid tumors, causing objective tumor regression in a variety of cancers such as melanoma, cervical squamous cell carcinoma, and cholangiocarcinoma. Approximately 25% of patients can Complete cure, more than half of the patients with metastases shrank. TIL has a variety of TCR clonality, superior tumor homing ability and low targeted toxicity, which makes it have advantages in the treatment of solid tumors that other adoptive cell therapies cannot match. Nevertheless, the successful application of TIL therapy is currently limited to several types of tumors.

Let’s review the development history of TIL and the current status of clinical trials together, and look forward to future clinical applications.

The history of TIL

In the 1950s, with the discovery of graft anti-tumor response and the key role played by T cells in this process, people began to actively explore the role of T cells in anti-tumor immunity. In 1982, Dr. Steven Rosenberg, a pioneer in this field, and colleagues from the National Institutes of Health (NIH) isolated TIL from a variety of mouse tumor models for the first time, and later proved that TIL combined with IL-2 cured 100% of MC38 liver metastases to colon glands Cancer mice and 50% of lung metastasis mice have laid the foundation for the clinical application of TIL in the treatment of advanced malignant tumors. The earliest attempts at clinical treatment of TIL can be traced back to 1988, and an objective response rate (ORR) of 60% was achieved in metastatic melanoma.

The production process of TIL usually starts in the pre-rapid amplification stage (pre-REP), during which TIL is separated from tumor fragments and undergoes preliminary amplification. The TIL is then further expanded in the rapid expansion phase (REP) in response to stimuli, such as IL-2 and/or feeder cells. Traditional TIL production is performed for specific tumor recognition and usually takes 6-8 weeks.

However, TIL is prone to exhaustion after long-term culture in vitro and cannot survive long-term in patients. In addition, the success rate of culturing autologous tumors in vitro is low, leading to a withdrawal rate of more than 50% for patients receiving TIL therapy, which greatly limits its clinical application. 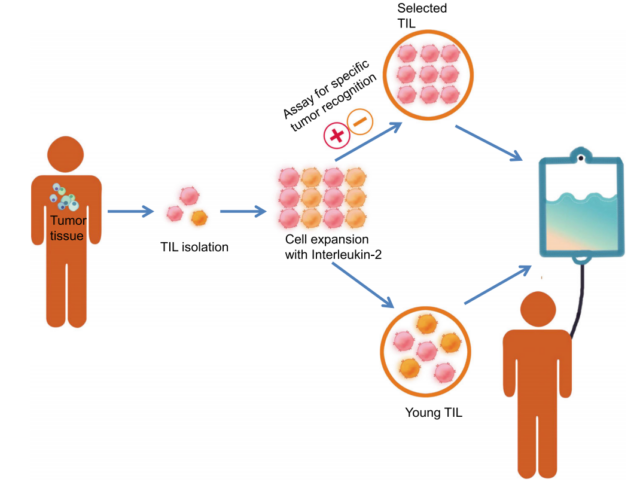 To this end, Dr. Rosenberg and others have developed a “young TIL” method, which can rapidly amplify TIL without in vitro tumor reactivity selection, thereby significantly increasing the time of TIL production and its survival in vivo Rate and efficacy. Later, “Young TIL” showed clinical results comparable to traditional TIL in patients with melanoma.

Studies have shown that anti-PD-1, anti-4-1BB or anti-CTLA-4 can increase the amplification of TIL. Compared with IL-2 alone, the combined application of IL-2/15/21 can enhance the expansion of TIL in lung cancer and colorectal cancer, and increase the percentage of CD8+ T cells and the diversity of TCR clones.

TIL composition and phenotype selection

Recent studies have shown that the composition and phenotype of TIL used in ACT play an important role in determining the outcome of treatment. In tumor immunotherapy, besides the most concerned CD8+ T cells, CD4+ T cells also play a role in tumor rejection. For example, the MHCII antigen HLA-DQO6-restricted CD4+ T cells identified in the TIL of a patient with cholangiocarcinoma can recognize the ERBB2IP mutation.

Although the use of high-dose TIL failed to show any objective clinical response, TIL enriched with more than 95% of ERBB2IP mutation-responsive CD4+ T cells induced significant regression of liver and lung metastases. Similarly, adoptive transfer of IL-17-produced helper T cells (Th17) can induce long-lasting anti-tumor immunity, indicating that the polarization of CD4+ T cells plays an important role in determining anti-tumor immunity. In summary, these data indicate that including CD4+ and CD8+ T cells may be a good treatment strategy to produce effective TIL-ACT.

In fact, only a small percentage (about 30%) of TIL is tumor-reactive. Choosing tumor-reactive TIL can significantly shorten the culture time and reduce the number of cells infused. PD-1 is highly expressed on melanoma-reactive TIL, and PD-1 positive TIL shows higher tumor reactivity than PD-1 negative TIL. In addition, the tumor-responsive TIL of melanoma patients screened with 4-1BB showed enhanced tumor responsiveness compared with unselected TIL.

In addition to including different T cell subpopulations, another factor related to the persistence of TIL is the presence of stem cell-like cells. A recent study showed that a small number of memory progenitor CD8+ T cells (CD39-CD69-) with a stem cell-like phenotype are responsible for the complete regression of cancer and the persistence of TIL.

The characteristics of TIL treatment of solid tumors
Some characteristics of solid tumors that are different from hematomas pose major challenges to the development of effective adoptive cell therapy. First, the high heterogeneity of solid tumors makes it difficult to find ideal targets for all tumor cells. Targeting a single tumor antigen usually leads to antigen loss or more aggressive clonal recurrence. Secondly, even if a large number of T cells are adoptively transferred, most solid tumors are difficult to infiltrate. In addition, there are a variety of immunosuppressive mechanisms in the tumor microenvironment (TME), which make it difficult for T cells to fully exert their functions. These inhibitions include, but are not limited to, the up-regulation of immunosuppressive molecules, cytokines and metabolites, the down-regulation of costimulatory molecules, and The presence of immune regulatory cell subsets, such as Tregs, MDSCs and TAMs.

TIL may have some unique advantages in the treatment of solid tumors. First, TIL is composed of T cells with multiple TCR clones and can recognize a series of tumor antigens. Therefore, compared with other adoptive cell therapies (such as CAR-T and TCR-T), TIL may be able to deal with tumor heterogeneity. More advantages. Consistent with this, TIL shows better clinical efficacy than CAR-T in solid tumors with high mutation burden (such as melanoma). Secondly, after being stimulated by tumor antigens in the body, TIL is often mainly composed of effector memory T cells (Tem), whose surface expresses chemokine receptors, such as CCR5 and CXCR3. Together with tumor-specific TCR, TIL can be easily localized to tissues expressing antigens, including tumors, after being transferred to patients. Finally, targeted toxicity is rarely reported in TIL therapy, which may be due to the negative TCR selection of TIL in the early development of T cell immunity.

Clinical research progress of TIL

To date, many clinical studies of TIL-ACT have been completed, some of which have shown encouraging results. The commercial autologous TIL product lifileucel (LN-145, LN-144 and LN-145-S1) developed by Iovance Biotherapeutics is in phase II clinical development for the treatment of unresectable or metastatic melanoma, recurring or metastatic head and neck Squamous cell carcinoma (HNSCC), recurring or metastatic non-small cell lung cancer (NSCLC).

Among them, LN-145 showed good initial treatment in 27 patients with advanced cervical cancer who had received at least one chemotherapy. An objective response rate of 44% was observed, including 1 CR and 9 PR. The FDA has granted LN-145 breakthrough therapy for the treatment of recurrent, metastatic or persistent cervical cancer and disease progression before and after chemotherapy.

TIL therapy is currently undergoing clinical trials mainly as a second-line treatment. In most clinical trials, melanoma remains the number one tumor type, followed by NSCLC, ovarian cancer, and head and neck cancer. So far, TIL therapy has shown impressive clinical benefits in metastatic melanoma and advanced cervical cancer, even in patients treated with checkpoint inhibitors. NSCLC, colorectal cancer (CRC), and breast cancer have also proved preliminary efficacy.

However, the routine use of high-dose IL-2 to support the growth and activity of infused TIL may limit the clinical application of TIL therapy. High doses of IL-2 usually cause systemic toxicity, requiring enhanced monitoring and care, and may also promote regulatory T cells that inhibit the anti-tumor response of TIL. Although an ORR of more than 30% can be achieved in low- or medium-dose IL-2 trials, most TIL trials still use high-dose IL-2 infusion. In addition, unsustainable in vivo survival and immunosuppression in TME are also the biggest obstacles to achieving TIL therapy.

A new generation of TIL

In order to reduce the toxicity of large doses of IL-2 and improve the survival rate and function of traditional TIL treatments, a new generation of TIL products are under active research. The new generation of TIL is a kind of genetically modified TIL that overexpresses a gene of interest through viral transduction, or knocks out (KO) the target gene through technologies such as CRISPR or TALEN.

However, the development of a new generation of TIL may face some major challenges. Gene editing in TIL may be technically difficult to achieve, due to the diverse cell composition and different growth rates of TIL. In addition, selecting the appropriate target gene in TIL is also a key and challenging problem.

So far, the clinical attempts of a new generation of TIL have mainly focused on engineering TIL to overexpress cytokines, such as IL-2 and IL-12. In a phase I/II trial, the insertion of IL-2 into TIL showed an increase in survival rate in vitro, but there was little improvement in persistence and clinical efficacy in vivo. Another phase I trial used NFAT-induced expression of IL-12 engineered TIL, which showed good clinical efficacy in metastatic melanoma, using 10-100 times less cell numbers than traditional TIL treatment, and achieving an ORR of 63% , But the levels of IL-12 and IFN-γ in the serum are abnormally increased, and the toxicity is significant.

Therefore, before the new generation of TIL enters the clinic, a comprehensive safety and functional evaluation of the genetically modified TIL is required. In addition to in vitro identification, animal models need to be established to better understand the persistence, function, and toxicity of modified TIL in vivo.

TIL-ACT is a promising new immunotherapy method for solid tumors, and it is expected to be applied to the clinic in the near future. TIL-ACT has undeniable advantages:

a) a strong and reproducible clinical response;

b) the ability to benefit patients with advanced tumors who have undergone multiple treatments, and these patients have no other treatment options.

However, there are many challenges associated with the production and provision of these therapies. Because a specific product must be produced for each patient, this requires highly specialized Good Manufacturing Practice (GMP) facilities and well-trained staff, resulting in high costs. In addition, the production process takes time, usually more than one month, which may be too long for patients with rapid tumor progression.

There is still much room for improvement and wider application of this treatment method, including the combined application with immune checkpoint inhibitors, and the combined oncolytic virus is also being explored. Although TIL therapy is still in its infancy in some countries, the vigorous development of the domestic industry has created a good macro environment. I believe that with the cooperation and joint efforts of all parties, TIL therapy will soon benefit more solid tumor patients.