Is there any risk of colorectal cancer after long-term use of proton pump inhibitors?

Proton pump inhibitors (PPIs) are first-line treatments for abnormal gastric acid secretion and related diseases (PPIs commonly used in clinical practice include omeprazole, lansoprazole, pantoprazole, rabeprazole, esomeprazole, etc.) Etc.), and has become one of the most commonly used prescription drugs in the world. However, as relevant studies continue to expose the possible negative effects of the use of PPIs, the risks of the long-term clinical application of PPIs have also attracted more and more attention.

Among them, the correlation between the use of PPIs and the risk of colorectal cancer has been controversial.

Recently, a study titled “Proton Pump Inhibitors and Risk of Colorectal Cancer” was published in the Gut journal [1]. The purpose of this study was to determine whether the use of PPIs is associated with an increased risk of colorectal cancer compared with histamine-2 receptor antagonists (H2RAs).

Researchers used the UK Clinical Practice Research DataLink (CPRD) to conduct a cohort controlled study, collecting patients who used PPIs and H2RAs between 1990 and 2018, and followed up until 2019. The Cox proportional hazard model is used to estimate the hazard ratio (HR) and 95% CI range of colorectal cancer. And use propensity score to weighted analysis of standardized mortality, and analyze the correlation with the cumulative duration of PPIs, cumulative dose, and time since the start of treatment.

However, in the second analysis, it was found that the risk of colorectal cancer would increase as the cumulative duration of use, cumulative omeprazole equivalent, and time after treatment began increased:

Table 1: Compared with H2RAs, the risk ratio of the relationship between the use of PPIs and colorectal cancer

In addition, in order to predict the relationship between exposure to proton pump inhibitors and colorectal cancer for a longer period of time, the researchers further carried out the NNH (number needed to harm) analysis (NNH means that a certain kind of intervention caused 1 case of a certain adverse event The number of people required indicates that the treatment has a harmful effect). The results show that compared with H2RAs, every 5343 people exposed to PPIs during the 5-year follow-up period will cause one person to develop colorectal cancer (NNH=5343); during the 10-year follow-up period, every 792 people exposed to PPIs will have 1 person will develop colorectal cancer (NNH=792). 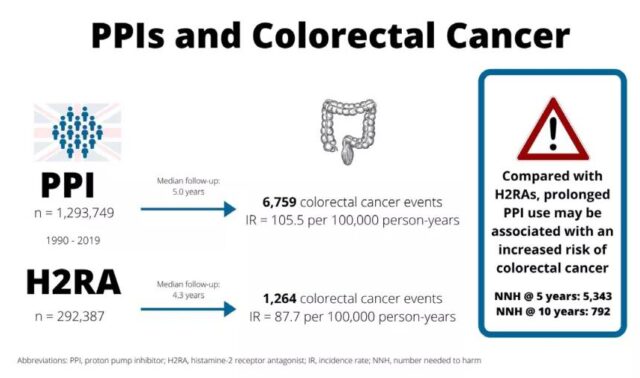 Why do PPIs increase the risk of colorectal cancer?

Previous studies have shown that gastric acid inhibitors can change the richness and diversity of the gut microbiota. Gastric acid inhibitors may increase the risk of colorectal cancer because the use of these drugs will cause a less acidic environment in the stomach to kill the swallowing microorganisms. The excessive growth of bacteria may increase the production of nitrite and N-nitroso compounds. It has been confirmed that nitrite and N-nitroso compounds are in the stomach and duodenum in patients using omeprazole. It is potentially carcinogenic [3-5].

As for whether the use of PPIs does cause an increase in the concentration of N-nitroso compounds, it is unclear so far [3.4]. However, by inducing bacterial overgrowth, PPIs may affect the composition of bile [6,7]. For example, anaerobic bacteria can stimulate the production of secondary bile acids [8], especially deoxycholic acid has been shown to be related to colorectal cancer [9].

In short, the study published in Gut is the largest and longest potential follow-up study to analyze the correlation between PPIs and the risk of colorectal cancer. Although proton pump inhibitors are not associated with the overall risk of colorectal cancer, considering the risks of long-term use of PPIs, the study suggests that doctors need to closely monitor patients who use PPIs for a long time.