Sofosbuvir for Hepatitis C: One pill equal to 24g Gold in some countries.

Sofosbuvir for Hepatitis C: One pill equal to 24g Gold in some countries. 24g gold is exchanged for one pill, 70 million patients are looking for cheap drug to treat Hepatitis C.

In December last year, the Nobel Prize in Physiology or Medicine was awarded to three scientists who made outstanding contributions to the discovery of hepatitis C.

This is a half-full cup, because the cure rate of hepatitis C is close to 100%. Once HCV infection is diagnosed, it can be cured without cirrhosis of the liver or death from hepatitis C related diseases.

But this is also a half-empty cup. (In the United States) 50% of infected people are still undetected. In developing countries, this figure will be even higher. Strengthening population screening is a top priority.

In addition, although the proportion of people receiving treatment is increasing, only a few of the known carriers of hepatitis C receive direct antiviral treatment; finally, the cost of drugs is the main obstacle preventing millions of people from being cured. Cure is no longer bound by science, but high cost is still a problem… Obviously to eradicate hepatitis C, the main hope is to develop a vaccine, but for the reasons I have already pointed out (referring to the genetic variants and immune escape mentioned above), It has been very difficult to develop a vaccine so far. [1]

In 2015, the worldwide diagnosis rate of chronic hepatitis C was about 20% [2], while in the previous year, the diagnosis rates of tuberculosis and AIDS had reached 63% and 54%, respectively. [3][4]

Since there is no hepatitis C vaccine, the incidence of acute hepatitis C is on the rise, with the most obvious being between 20-29 years old and 30-39 years old.

It can be seen from this that although the incidence of hepatitis C in some countries is relatively low, the effectiveness of the control is also far less than that of hepatitis B.

In addition to the low diagnosis rate, the availability of drugs for hepatitis C treatment is also not high.

As of August 2017, researchers investigated the direct-acting antivirals (DAAs, Direct-acting antivirals) reimbursement policies in 35 countries and regions including the European Union, the European Economic Area, and Switzerland, and found that 16 (46%) countries and regions Limit the reimbursement conditions to stage 2 or more severe cirrhosis.

In other words, in these countries and regions, only hepatitis C patients with moderate to severe cirrhosis can obtain DAAs at a lower price. [6]

Take Italy, one of the countries with the highest incidence of hepatitis C in Europe, as an example. Before March 2017, most of the patients who could use DAAs in Italy were patients with very serious illnesses.

After March 2017, the Italian Ministry of Health allowed unregistered generic drugs for personal use to be imported into Italy to overcome access restrictions due to high prices.

After that, Italy entered the era of universal treatment of hepatitis C. [7]

Unlike the “barrier to entry” for diagnosis in Italy, in China, the low availability of medicines is more reflected in prices.

As the largest country with hepatitis C, China has about 10 million chronic hepatitis C patients, accounting for 1/7 of the world’s total. [8]

Searching for posts two years ago in “Hepatitis C forum”, you can see a lot of content about purchasing Indian generic drugs. Two or three years ago, the price of a course of treatment in China for the three generations  was about 10,000 US dollars, which is more than 70,000 yuan-but the per capita disposable income of Chinese residents was just over 30,000. On the Internet, the price of generic drugs is 6,000 to 8,000 yuan, which is about one-tenth of the price of genuine drugs.

The difference between the new and old packaging generic drugs of a pharmaceutical company in India
Image source: Tieba screenshot

Fortunately, with the success of medical insurance negotiations in the past two years, the price of genuine drugs is gradually decreasing.

On November 28, 2019, the results of the 2019 medical insurance negotiations were released. Gilead’s “Jilin II”, “Jilin III” and Merck’s Elbavir Glarevir tablets (Zebita) were all included in the medical insurance. The average reduction of drugs used in the treatment of hepatitis C was over 85%.

China Medical Insurance reduced the price of anti-hepatitis C drugs to a barely acceptable range through competitive negotiations. However, the low cost multiplied by the huge patient base allows pharmaceutical companies to still make a lot of money.

For other low- and middle-income countries, the relatively small market makes the government not strong enough in bargaining power, which makes it difficult to obtain affordable anti-hepatitis C drugs.

A solution is so far?

So far, the situation of hepatitis C treatment is still unclear, and it sounds like a continuous tug of war.

In order to break the situation, countries and world organizations are exploring new models. In recent years, MSF has carried out a hepatitis C diagnosis and treatment project in Cambodia, and has achieved good results.

Not long ago, Dingxiangyuan contacted Michael Le Paih, the director of the Cambodian hepatitis C project of Doctors Without Borders, to try to obtain more project details and successful experience.

Let’s first look at the problem of hepatitis C diagnosis and treatment in Cambodia at that time.

Nipa told us that before the start of the project, Cambodian hepatitis C patients could only obtain DAAs and complete diagnosis and treatment in private clinics, but the prices of the drugs were rarely affordable.

Take Sofosbuvir as an example. When Sofosbuvir was first launched on the market, Gilead’s price was US$1,000 per tablet and US$84,000 per course of treatment.

On December 6, 2013, the FDA approved the marketing of Sofosbuvir. If we compare the price of gold on the same day ($43.5/g), sofosbuvir contains 400mg of active ingredient per tablet. In other words, the price of Sofosbuvir is about 60 times that of gold.

Sophosbuvir is unaffordable gold for countries and people who are not already rich.

Nipa told Dingxiangyuan, “In order to solve this problem, they decided to replace face with dots, and pilot the simplification of the diagnosis and treatment process and the distribution of free drugs.”

This is not a casual decision. The project was first carried out at Preah Kossamak Hospital, a national hospital in Phnom Penh, the capital of Cambodia.

In terms of simplification of the process, for example, because the results show that DAAs are effective for all genotypes, they canceled the previous genotyping test. At the same time, the method of preliminary screening for hepatitis C antibodies has been changed from ELISA to rapid diagnosis (RDT, Rapid diagnosis test), and the method of confirming HCV RNA has also been changed from traditional PCR to faster methods such as GeneXpert.

In addition, if it is not a special infected person (such as age >50 years old, FibroScan indicates liver cirrhosis, combined with hepatitis B infection, etc.), the hospital will not conduct more laboratory tests on them in order to save limited resources such as materials and manpower.

And because MSF started out with the banner of “distributing drugs for free”, this project successfully attracted hepatitis C patients from all over the country, which provided great support for improving the diagnosis rate. Nipah said that resources must be used on the cutting edge under objective conditions. “The simplification of a series of diagnosis and treatment processes did not reduce the effect of treatment. After 12 weeks of treatment, the sustained virological response rate (SVR, Sustained virological response) was 97.2. %, there is no significant difference from the original diagnosis and treatment model.”[9]

The so-called decentralized diagnosis and treatment is another new concept, which refers to the provision of medical services for patients closer to home in surrounding health facilities, community places and other places outside the hospital. [10]

For example, based on the team’s finding that the use of FibroScan does not affect the diagnosis of decompensated liver cirrhosis, the FibroScan examination was cancelled in health centers without these sophisticated instruments. [11]

The diagnosis and treatment steps have also been simplified from the earliest 16 to the current 5-the patient can complete the whole process from diagnosis to treatment in 5 runs, which greatly improves the patient’s enthusiasm for treatment and also improves the treatment efficiency of the medical team. 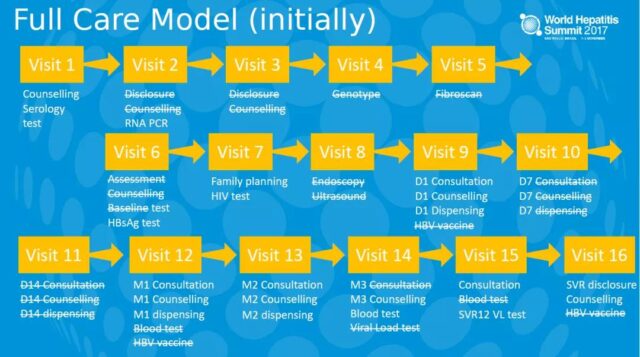 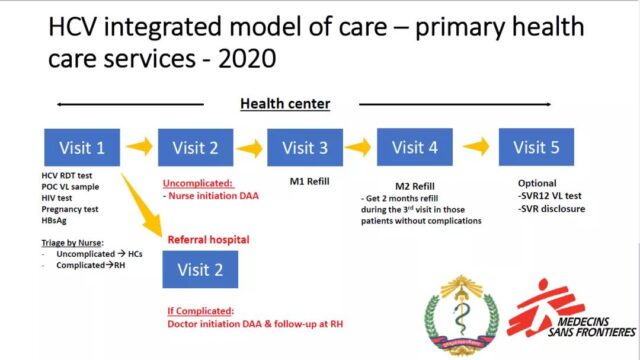 Simplify the comparison of pre- and post-diagnosis and treatment steps
Image source: Doctors Without Borders

During the interview, Nipah also mentioned that the Cambodian treatment plan is actually a generic drug of Sofosbuvir (original Gilead) and Dacatavir (original Bristol-Myers Squibb).

Through their efforts, the cost of a full course of treatment for a hepatitis C patient in Cambodia is US$75, which is more than 1,000 times lower than the original price.

Generic drugs, prices plummeted-why can this be done? This is related to Gilead’s Voluntary Licensing (VL, Voluntary licensing) agreement.

Due to the criticism of high drug prices by many governments and organizations, on September 14, 2014, Gilead announced that it had reached a generic agreement (namely a voluntary patent license agreement) with seven generic drug manufacturers in India. The agreement will allow these companies to produce and provide generic drugs for the treatment of hepatitis C to 91 developing countries, and Cambodia is one of these 91 countries. [12]

In other words, with the help of this agreement, Cambodian patients can legally and compliantly use generic drugs.

Also on the list of imitation agreements with Cambodia is Egypt, the country with the highest incidence of hepatitis C in the world.

In fact, at the earliest, Egypt was not on the list. However, the Egyptian Patent Office made it clear in 2014 that it refused to grant a patent for this new hepatitis C drug.

Nipah said, “Although they are in compliance with regulations and serve patients, the ways to obtain medicines vary from country to country. Except for quantifiable clinical diagnosis and treatment requirements, the route of administration and the degree of strictness will actually vary due to different policies.”

5. The dilemma of other countries

Similar to Egypt at the time, as far as the situation is concerned, Cambodia’s low drug prices are difficult to replicate in countries that are excluded from the imitation agreement.

As of November 2017, in Gilead’s latest list of imitation agreements, the number of authorized countries has officially increased to 105.

The opening statement of the agreement reads: Gilead is committed to providing medicines to all patients who can benefit, no matter where they come from and regardless of their financial conditions. [13]

But restrictions still exist. For “aid” purposes, this list mainly covers low-income countries in sub-Saharan Africa, South and Southeast Asia, and island countries, many of which have little HCV epidemic data or treatment needs.

According to data analysis, in fact, nearly three-quarters of the world’s poor live in middle-income countries, and millions of hepatitis C patients in need of treatment will not be able to obtain generic hepatitis C drugs.

Similarly, high-income countries are even more unlikely to be included in the list.

Although we all know that buying genuine drugs is the most correct market behavior, the dust of the times has fallen on every patient’s family, and it is so heavy.

The number of hepatitis C patients who are not permitted exceeds 40% of the total number. Tens of millions of people outside this permit do not know when they will be able to obtain cheaper treatment drugs through formal channels.