UK or United States won herd immunity against COVID-19? In the past two months, when the world was anxious about the Delta mutant strain, the United Kingdom started “Freedom Day” on July 19 with the continued increase in the number of new cases.

When many people were more pessimistic about the UK epidemic, the number of new cases in the UK started to decrease.

The vaccination rate in the UK is the highest among major countries. The epidemic situation in the UK has improved since late July. Did vaccination achieve herd immunity?
Obviously not.

In the face of high infectivity with a basic infectious value (R0) of 5-9.5, the current vaccination rate in the UK is not enough to achieve herd immunity.

How did the UK survive the delta mutant wave?

Although medical scientists are still doing further research on the reasons for the continued decline in the number of new infections in the United Kingdom, the explanation currently given is: Due to the timing of the node, the United Kingdom won.

First. The European Football Championship is over.

Anyone who likes football knows which country “soccer hooligans” is the craziest. Young people in England don’t watch football at home, but go to stadiums, bars, etc. to gather to watch the football.

The British team reached the finals all the way, and the number of cases in the United Kingdom has soared, especially among young men aged 20-34, which has soared disproportionately. After the European

This explanation was supported by Dr. John Edmunds, Professor of Medical Epidemiology of Hygiene and Tropical Medicine in London.

Secondly, the British students are on holiday.

In the early stage of the epidemic, the elderly in the UK were severely injured by COVID-19. Therefore, the British vaccinations were very biased, that is, the elderly and vulnerable groups were given priority. On the contrary, in the first year of the COVID-19 pandemic, among the deaths of the COVID-19 infection in the UK, only 25 children were under the age of 18, and most of them were children with serious underlying diseases. Therefore, the UK temporarily did not give 12-17 years of age. Children of different ages are vaccinated.

However, these unvaccinated children are one of the main sources of COVID-19 infection at school and spread to their families.

Students are on holiday, which reduces an important channel of transmission.

The first two items point to time “coincidentally”, and the epidemic should drop. But in fact, the UK is not a complete win. No one can succeed casually.

The continued decline in the number of cases in the UK this time is inseparable from the UK’s epidemic prevention strategy.

First, it is the British vaccination strategy.

As we mentioned earlier, the elderly and susceptible populations are given priority for vaccination, and the UK and Germany will also start the third injection for high-risk populations in September.

The priority protection of high-risk groups has not only steadily controlled the fatality rate, but also effectively reduced the infection of the Delta mutant strain in the prone areas of nursing homes.

Second, the UK has used the COVID-19 quarantine notification system.

British Health Minister Sajid Javid announced on July 17 that he had tested positive for the COVID-19 virus; Minister Javid had received two doses of AstraZeneca’s adenovirus vaccine. At the same time, British Prime Minister Johnson began self-isolation after receiving a “ping” signal from his cell phone due to his close contact with the Minister of Health.

About half a million people in the United Kingdom received this “contact with people infected with the new coronavirus” signal and were forced to self-quarantine.

However, this quarantine has also caused serious disturbances to people and businesses, so that on August 2, the UK adjusted its quarantine measures to re-adjust the balance between quarantine and epidemic prevention. On August 16, even if a fully vaccinated person is in contact with a COVID-19 case, they do not need to be isolated unless there is a breakthrough infection.

The UK has the highest vaccination rate, especially among high-risk groups such as the elderly. In this case, the number of cases in the UK increased sharply in the previous stage, but the number of deaths has not changed much, thanks to the protection of vaccines; this allows the British government to continue to promote the open policy. Although the high vaccination rate of the vaccine is temporarily unable to achieve herd immunity to completely block the epidemic, it still contributes to reducing the spread of the epidemic.

In any case, the number of cases in the UK is declining.

1) The first country where Delta mutant strains are raging;

2) The country with the highest vaccination rate among the large countries;

3) Both the Pfizer mRNA vaccine, which is highly protective against infection, and the adenovirus vector vaccine produced by the domestic AstraZeneca company with no outstanding protection, are used.

So the UK provides a testing ground for how vaccines deal with mutant strains.

Looking forward to the experience of the United Kingdom, it will be inspiring for other countries. For example,,, the United States.

The reduction in the number of cases in the United Kingdom seems to have given the American people hope and strengthened their confidence to win. Therefore, the tourist areas of the United States are overcrowded recently.

Some reporters went to the amusement park on the weekend, and there were more people than in the summer vacation of 2019; however, those who wear masks are rare.

Yes, there will always be crests. The key is how much to pay. 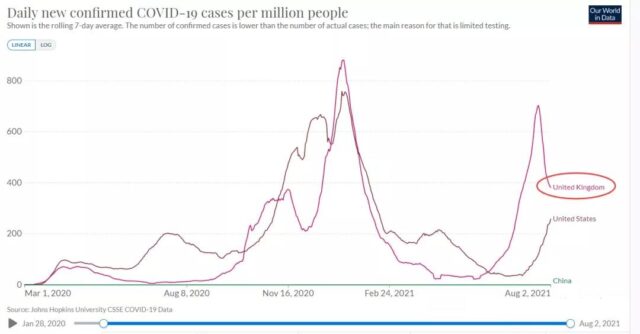