What are neoantigens in the current tumor immunotherapy?

Generally, TCR on the surface of CD4+ and CD8+ T lymphocytes recognize antigens (Ag) or epitopes presented by major histocompatibility complex (MHC) class I and II molecules, respectively. When the MHC-Ag-TCR tertiary complex is formed as a recognition signal and a costimulatory signal (the interaction between CD28-CD80/CD86), they can trigger signal transduction in T cells and then destroy target cells. Image

There are three main sources of tumor antigens:

The following table summarizes the characteristics of the three tumor antigens.

Neoantigens are tumor-specific antigens derived from non-synonymous mutations and are very attractive targets for tumor immunotherapy. Due to the development of next-generation sequencing technology and the application of machine learning algorithms, it has become possible to calculate and predict neoantigens by describing genetic changes in tumor tissues, abnormal post-transcriptional mRNA processing, and abnormal mRNA translation events. Therefore, neoantigen-based therapies, such as cancer vaccines, have been extensively tested in clinical trials and have proven to have good safety and effectiveness, opening up a new era of tumor immunotherapy.

Unlike TAA, TSA/neoantigen is a mutant peptide obtained from the genetic changes of the tumor genome. It is specifically expressed in tumor cells and not present in normal tissues. Therefore, it shows high tumor specificity and reduces non-targeting. toxicity. Personalized immunotherapy based on neoantigens can stimulate a powerful anti-tumor immune response against tumor cells.

New antigen identification relies on high-throughput sequencing data from DNA and RNA samples from tumors and normal tissues. By using bioinformatics methods to analyze whole exome sequencing (WES) and mRNA transcriptome sequencing (RNA Seq) data, it is possible to determine the DNA and RNA level mutations that may lead to neoantigenic epitopes. 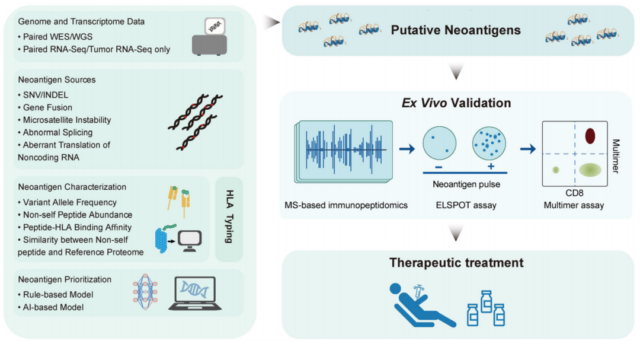 In addition, important data related to the immunogenicity of neoantigens also include: (1) the affinity between the patient’s mutant peptide and HLA allele; (2) the binding stability of the peptide HLA complex and (3) the host gene Express. In addition to the features from WES and RNA-Seq data, other features describing the recognition potential between mutant peptides and T cell receptors can also be incorporated into the neoantigen prediction system.

At present, synthetic peptide-based neoantigen vaccines have been used in multiple clinical trials, and some clinical trials have shown the anti-tumor efficacy of peptide tumor neoantigen vaccines. NeoVax is a personalized neoantigen peptide vaccine for patients with melanoma. In a phase 1 clinical trial (NCT01970358), patients with high-risk melanoma at stage IIIB/C and IVM1a/b confirmed by pathology were selected. The median postoperatively A few 18 weeks later, he received NeoVax treatment. Individualized peptide vaccines targeting 20 new antigens are formulated from poly-ICLC, which is a synthetic double-stranded RNA (dsRNA) mimic that can stimulate TLR3 and MDA5. By stimulating MDA5, Poly-ICLC can effectively induce IFN-I and IL-15. It can also promote T cell expansion and enhance T cell infiltration, making it an effective adjuvant for peptide cancer vaccines.

In 2021, the study announced the follow-up results of 8 melanoma patients participating in this trial, with an average follow-up time of 55 months. The results showed that all 8 patients were alive and 6 patients showed no signs of active disease. Tests on T cells in the peripheral blood of patients showed that after NeoVax vaccination, the neoantigen-specific T cell response of melanoma patients continued for several years, and the neoantigen-specific T cells showed a memory phenotype.

In addition, the study also found that NeoVax can induce the spread of epitopes that respond to T cells, which also means that the range of tumor-specific cytotoxicity is broadened. However, three patients in this study relapsed at 26, 40, and 40 months after vaccination, and the other two patients relapsed shortly after vaccination, but after treatment with the anti-PD-1 inhibitor pembrolizumab, they quickly achieved complete remission.

A phase Ib clinical trial (NCT02897765) studied the efficacy of a personalized neoantigen vaccine NEO-PV-01 combined with PD-1 blockers in the treatment of patients with advanced melanoma, non-small cell lung cancer or bladder cancer. In this experiment, the neoantigen peptide and the adjuvant poly ICLC were mixed and injected subcutaneously, and Nivolumab was used continuously during the vaccination period. The results showed that the overall response rates of patients with melanoma, non-small cell lung cancer, and bladder cancer were 59%, 39%, and 27%, respectively, and the median progression-free survival (PFS) was 23.5 months, 8.5 months, and 5.8 months, respectively ; The 1-year overall survival rate is 96%, 83% and 67%, and these data are not lower than the historical data of PD-1 antibody monotherapy. Epitope spread has also been observed after vaccination and is associated with longer PFS.

In a phase 1b clinical trial (NCT03289962), a personalized vaccine RO7198457 based on RNA liposomal neoantigens was tested in patients with advanced solid tumors who had previously received multiple treatments. The vaccine encodes up to 20 new novel antigens. antigen. A total of 29 patients received RO7198457 monotherapy, and 132 patients received RO7198457 combined with anti-PD-L1 antibody atezolizumab. Based on the data of patients who have received at least one tumor evaluation, the trial showed that the ORR of monotherapy was 4% (1/26) and 40% of SD (9/26), the ORR of combination therapy was 8% (9/108), and SD It is 49% (53/108). In most patients in both groups, RO7198457 induced a neoantigen-specific T cell response.

In another phase 1 clinical trial (NCT03313778), another RNA-based neoantigen vaccine, mRNA-4157, was tested. Of the 79 patients who received mRNA-4157 treatment, 16 received monotherapy and 63 were combined with pembrolizumab. mRNA-4157 is safe and well tolerated. 3 cases of complete remission (CR) and 8 cases of partial remission (PR) were observed in the combined administration group. Especially in 10 HNSCC patients, the ORR was 50% and mPFS was 9.8 months, while the ORR of pembrolizumab monotherapy was only 14.6% and mPFS was 2 months.

Recently, a phase I clinical trial (NCT02956551) studied the safety and effectiveness of a personalized neoantigen autologous DC vaccine (Neo DCVac) in the treatment of 12 cases of severely metastatic lung cancer. The results showed that the overall safety of the vaccine was good, with ORR of 25%, DCR of 75%, mPFS of 5.5 months, and median overall survival (mOS) of 7.9 months. When used in combination with ICI therapy, Neo-DCVac shows a synergistic therapeutic effect. These results indicate that Neo DCVac can induce specific T-cell immunity, and this trial demonstrated the efficacy of neoantigen-based DC vaccines for cancer patients for the first time.

TCR-based engineered T cell therapy is another option for neoantigen applications. Compared with the DC vaccine trial, there are currently no clinical trial results of neoantigen-specific TCR-T cell therapy, and only case reports have been published.

These cases included a patient with metastatic colorectal cancer who received KRAS-G12D targeted TIL therapy and a patient with chemotherapy-refractory HR-positive metastatic breast cancer who received TIL therapy. TIL targeted SLC3A2, KIAA0368, CADPS2, and CTSB, respectively. Four mutations in the distribution. Both treatments have achieved clinical efficacy. Breast cancer patients who received both IL-2 and ICI combined therapy showed complete and lasting regression for more than 22 months, while only receiving KRAS-G12D targeted TIL therapy for metastasis Patients with colorectal cancer progressed 9 months after treatment.

One of the biggest challenges of neoantigen-based T cell therapy is to identify and isolate these mutation-specific TILs and TCRs. In addition, neoantigen-based DC and TCR-T therapies should pay attention to potentially fatal side effects including cytokine release syndrome (CRS).

Cancer vaccines based on public neoantigens

An example of a public neoantigen is the G12D mutation on KRAS, which is common in pancreatic cancer, colon adenocarcinoma, non-small cell lung, and colorectal cancer. Similarly, TP53 is a well-known tumor suppressor gene, which is widely mutated in a large number of cancers, has a wide range of hotspot mutations, and is shared by many cancers.

Currently, most clinical trials for public neoantigens are still in progress, and some early trials have reported good results. In an open-label, single-arm phase I clinical trial (NCT01250470), the safety and efficacy of survivin peptide (BIRC5) in 9 patients with relapsed malignant glioma were tested. The survivin peptide is 15 amino acids long and contains different The immunogenic epitope of 8 to 10 amino acids has the same C57M mutation. The results show that some patients have achieved partial remission or have been stable for at least 6 months.

In another trial with a similar design (NCT02261714), the KRAS mutant peptide TG01 (containing seven known oncogenic mutations) was used as a vaccine in combination with granulocyte-macrophage colony stimulating factor (GM-CSF) , Used in 32 patients with stage I or II pancreatic cancer who underwent surgical resection (R0 or R1), of which 93.75% carried detectable KRAS mutations. The results show that the safety of the low-dose group is better. Both doses produced a strong cellular immune response, and the 2-year and 3-year survival rates of subjects were approximately 72 and 37%, respectively. In short, the public neoantigen vaccine has proven its great value as a cancer treatment target.

However, there are still some challenges in neoantigen-based therapy, and several aspects of neoantigen vaccines need to be optimized to achieve a better clinical response.

Secondly, it is necessary to test and evaluate the best neoantigen formulation and corresponding modifications, the neoantigen delivery system used, the route, and the safe and effective dosage in clinical trials.

In addition, the combination of neoantigen vaccines with TAAs and other immunomodulator therapies has shown good synergistic therapeutic effects.

Therefore, the use of neoantigen vaccines and radiotherapy, chemotherapy or ICIs and TME immunomodulators should be further evaluated in future studies. Combined.

It is believed that the neoantigen vaccine, as a brand-new and extremely promising technology, will solve these problems and it will surely occupy a place in the field of tumor immunotherapy in the future.