New breakthrough: “Starving” Streptococcus pneumoniae can block its pathogens.  Streptococcus pneumoniae is a common pathogen of pneumonia. In severe cases, it can invade lung tissue and cause pneumonia. Studies have found that bacteria that feed on manganese as a food and energy source mainly rely on a transport protein-membrane protein to absorb nutrients. By destroying this transporter, pneumonia infection cannot be caused.

Nearly 500,000 children worldwide are infected with Streptococcus pneumoniae every year, and most of them may not live to their 5th birthday. Like COVID-19 pneumonia, when we cough or sneeze, Streptococcus pneumoniae will spread in the form of droplets. It can cause fatal pneumonia, meningitis, sepsis or blood poisoning, and inner ear infections, which often cause deafness in Aboriginal and Torres Strait Islander children.

There is an urgent need for new methods to prevent and treat diseases and disabilities caused by Streptococcus pneumoniae, such as brain damage, hearing loss, and impaired lung function in adulthood. This new method may “starve to death” the pathogen.

Professor Megan Maher, a biologist and chemist at the University of Melbourne’s School of Chemistry and Bio21 Institute, said: “Vitamins and minerals, including iron, copper, zinc and manganese, are essential to human health, but bacteria also need them.”

More than ten years ago, Professor Christopher McDevitt and Associate Professor Maher from Doherty Institute laboratory worked together to find clues that manganese is vital to the survival, metabolism and infectivity of Streptococcus pneumoniae. Microbiologist Professor McDevitt first discovered that zinc is toxic to Streptococcus pneumoniae because it prevents manganese from entering the cell. He said: “Our research shows that pathogens must steal manganese from the body to cause infection. Part of the body’s immune response to bacteria uses zinc to block this pathway.”

Therefore, Professor McDevitt and his team knew that manganese is an important mineral for pathogens. They searched for and identified the “channel” or transporter specific to manganese absorption in Streptococcus pneumoniae. Recently, researchers published a paper entitled “The structural basis of bacterial manganese import” on Science Advances. 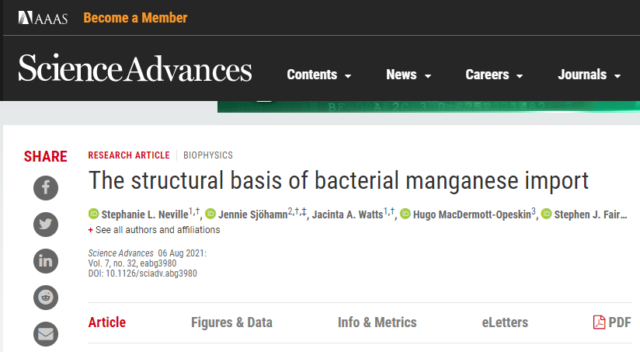 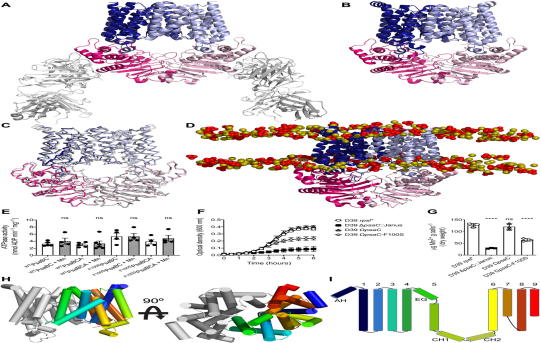 Professor McDevitt explained: “Streptococcus pneumoniae has only one transporter to absorb this essential nutrient. We already know that if you destroy any part of the transporter, the pathogen cannot cause infection. Because this type of transporter is not available In the human body, it is therefore an ideal target for new antibacterial drugs.”

Associate Professor Maher recalled: “The ultimate goal is to determine the structure of the transporter used by Streptococcus pneumoniae in order to design drugs against it. It was difficult to do this at the time, so Professor McDevitt approached me and asked me, can we do this. ?Later, in order to understand how the transporter protein works, we used X-ray crystallography.”

This technique requires cultivating crystals of this protein in a laboratory and then irradiating the crystals with an X-ray beam. For each crystal, light is scattered in a unique way to build the precise three-dimensional structure of the protein.

These 3D structures are depicted as beautiful loops, flakes and spirals. But extracting the manganese transporter from Streptococcus pneumoniae is a particularly difficult task because it is tightly embedded in the bacterial cell membrane, where it can also control other entry into the cell.

Associate Professor Maher said: “We spent six years, including the time at La Trobe University, and finally completed the Bio21 Institute. Membrane protein is one of the most difficult protein categories to study. Among all known protein structures, only They are a small percentage and they are very complex. That’s why it took 6 years.”

The researchers used detergent to remove the protein from the membrane and dissolve it in the solution. Once the protein is wrapped in a layer of detergent molecules, they will grow crystals in the presence of detergent. Protein crystals are grown under highly controlled conditions. It may take weeks, months, and multiple attempts to get the right conditions to grow them.

Associate Professor Maher explained: “Transporters really give us a lot of surprises. It belongs to a very large protein family called’ABC transporters’. Its structure has been revealed and compared with other proteins in the same family, It looks very different. It is smaller and more compact than other ABC transporters, and has a unique path for manganese to pass through. Similar ABC transporters are called “Teflon coated channels”, once the transporter receives the correct Molecules, they slide into the cell through it, without any interaction. And we found a unique pocket in the transporter, which has a special interaction with manganese.”

Membrane proteins are particularly interesting as drug targets because they play an important role in transporting basic molecules (such as manganese), as well as in signal transmission and other functions.

Professor McDevitt explained: “Manganese is a tiny chemical substance. In order for the transporter to be specifically selected for it, there needs to be an interaction inside the channel to help the correct molecule pass. This is an example of’coordination chemistry’. . A large number of other soluble proteins, we can predict their appearance, because our database already has many other structures to compare with. Because we don’t have many membrane protein structures, when you get a new structure, it usually compares with The structure that already exists is completely different.” Understanding this structure is the first step in the development of drugs or treatments for Streptococcus pneumoniae. Our approach is to block this pathway and prevent transporters from bringing manganese into the bacteria.

Associate Professor Maher said: “This can be achieved by creating specific antibody drugs or other binding molecules that specifically target this transporter and block it. This is what we will do next.”