COVID-19 mutant strain B.1.526 discovered in New York is more lethal? The lethality is increased, the transmission power is increased, and it is immune to escape…

Recently, many media are reporting a piece of news that the COVID-19 mutant strain B.1.526 discovered in New York is more lethal than other strains.

Now mutant strains emerge in endlessly, what is this B.1.526? If lethality increases, what about infectiousness? What about immune escape ability? Should we be worried?

Two new studies have been published recently, devoted to it. One has been published in Nature Communications, and one is from the New York City Department of Health, which is the one mentioned in the news above.

When did you find it? Where is it distributed?

The GISAID virus sequence upload data shows that on January 6, 2021, B.1.526 has the first upload record, which was uploaded by Grenada. The current frequency of uploading virus sequences is mostly concentrated in the Americas. Hong Kong, China also uploaded data in March this year. According to a preprinted article in February this year, the earliest location of B.1.526 was New York, USA. 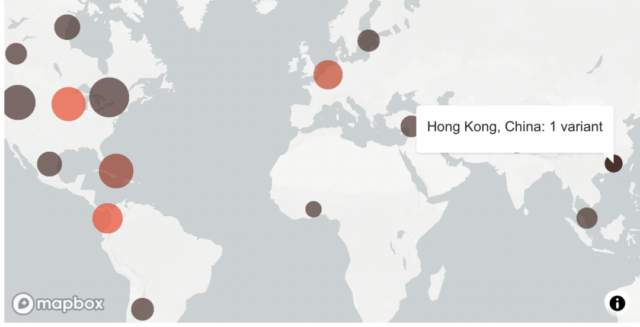 (Currently the data upload situation of B.1.526 around the world can be used as a reference for distribution)

According to reports, B.1.526 has been found in 27 countries and has been reported in 52 states in the United States.

What is the mutation situation? Is it immune to escape? Is it strong in dissemination?

The article published in Nature communication answers the above three questions.

First of all, even if it is a variant strain with the same number, it is not necessarily that all the variant sites are the same. This article in the sub-Journal of Nature sorts out the main mutation sites and different types of B.1.526. Among them, the mutation E484K is already very familiar to everyone-it has the ability to escape immunity. 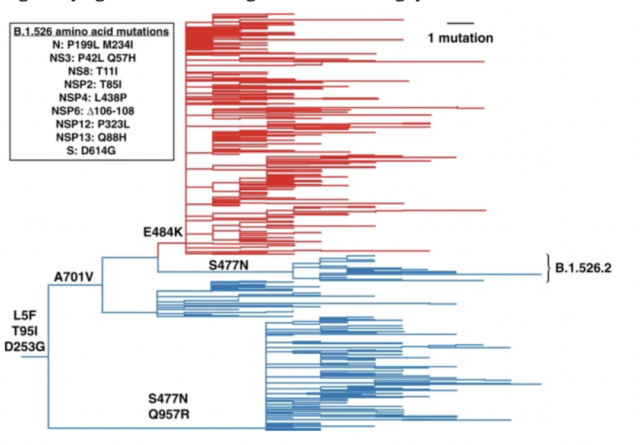 Secondly, what is the specific immune escape ability of B.1.526? This paper also gives the answer. The researchers used the plasma of Moderna vaccine and Pfizer vaccinators, as well as the plasma of recovered patients, but the situation is not optimistic. 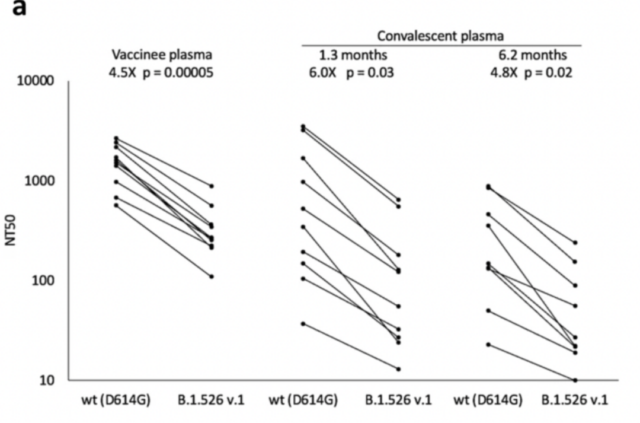 The above picture shows the effect of B.1.526 v.1 containing variant sites such as L5F, T95I, D253G, E484K, etc. The left side of each column is the wild type as a control, and the right side is the mutant strain, which can be seen very clearly At this point, all lines are inclined downwards, indicating that the mutant strain has a significant immune escape ability against the antibodies produced by the vaccine and the plasma antibodies of the recovered patients. 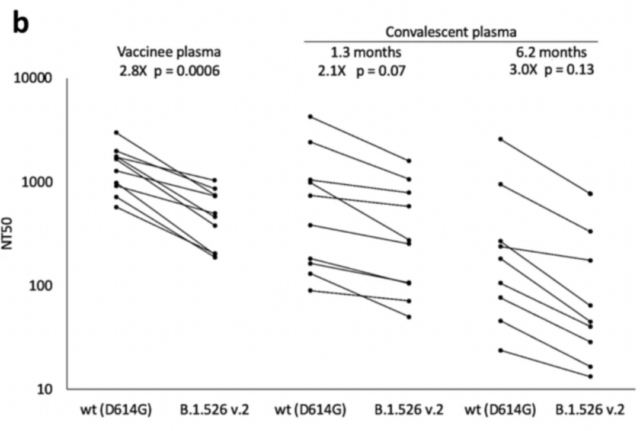 The picture above is B.1.526 v.2 which contains variants such as L5F, T95I, D253G, S477N, Q957R and so on. For the antibodies produced by the vaccine and the plasma of recovered patients, immune escape also occurred, but the immune escape ability of this subtype is not as strong as the B.1.526 v.1 carrying E484K.

In terms of communication capabilities, Nature’s sub-journal papers also gave the results of a survey that made people bald—— 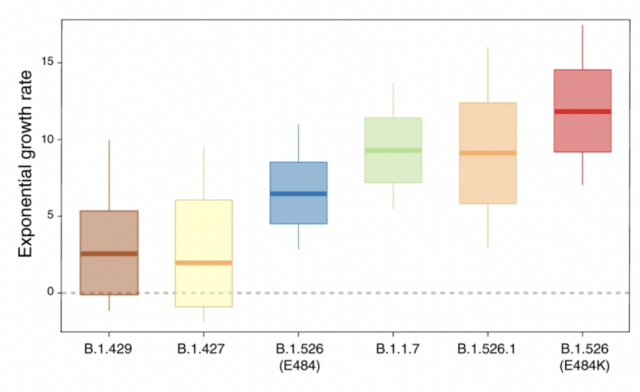 Even for middle-aged people, lethality increases

The Epidemiological characteristics of the B.1.526 SARS-CoV-2 variant of the New York City Department of Health confirms the view of the Nature sub-journal paper that B.1.526 has immune escape ability and enhanced transmission ability.

At the same time, they also discovered one thing that Nature’s sub-journals did not find: increased lethality. However, this enhancement is not for all age groups, but for people over 45 years old. See the table below for details. 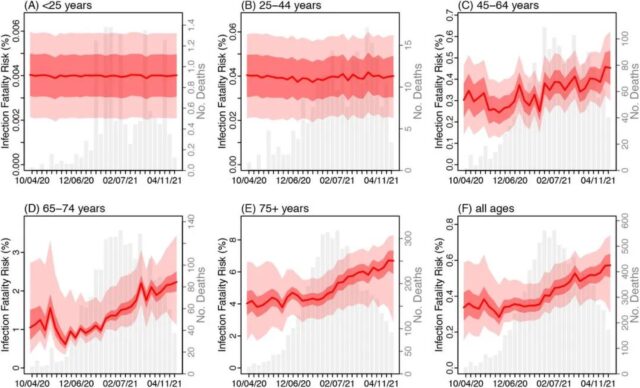 So, do we need to worry?

It also improves the lethality, the transmission capacity, and the immunity to escape… Does it sound like “tired, ruined”?

In fact, the above two studies have a certain degree of lag, and their data deadlines are about April this year. After April, the epidemic situation has changed a lot. The current proportion and spread of this mutant strain in the epidemic area is very different from that at that time. Just as the paper did not directly compare it with Delta, it was also due to April. Delta has not yet spread on a large scale in the United States.

It is currently unknown what role it will play in the new round of global epidemic climax triggered by Delta. While tightening the fence, we need to pay close attention to the dynamics of these mutant strains-they may be changing in the direction of being more deadly, more immune to escape, and stronger transmission, which will be very detrimental to humans.