UK Unblocking: The number of COVID-19 hospitalizations and deaths did not increase with the number of diagnoses

UK Unblocking: COVID-19 Hospitalizations and deaths did not increase.  UK Unblocking: A “Gamble” and “Experiment of Breakthrough”?  Test the effect of “herd immunity” with almost no epidemic prevention measures.

“We have taken another big step towards normal life.” British Health Minister Sajid Javid explained that from now on, those adults and those under the age of 18 who have completed two doses of vaccinations, if they are notified that they have been in close contact with the COVID-19 Patients who are diagnosed will no longer need to self-isolate, but will “follow the recommendations” and undergo COVID-19 testing as soon as possible.

The aforementioned “isolation exemption regulations” are also applicable to “medical exempt persons” who have a medical certificate that cannot be vaccinated. In addition, children under the age of 5 need to undergo relevant tests only when they are diagnosed in the same household.

Prior to this, the United Kingdom had relaxed the “quarantine order” for medical and other industries. For example, for medical and nursing staff who have received two doses of the vaccine, even if they are in close contact with an infected person, as long as the COVID-19 nucleic acid test is negative, they can return to work. As a preventive measure, such personnel should be screened quickly every 10 days.

At this point, the UK’s epidemic prevention measures are almost only left: normalized free COVID-19 testing, mass vaccination (including the implementation of the enhanced injection program), travel restrictions on some domestic and foreign areas, etc. Fully vaccinated people from the European Union and the United States, with a negative COVID-19 result, no longer need to be isolated when they arrive in the UK.

The British media BBC once described that the United Kingdom’s unblocking is a “gamble” and an “experiment”: no other country will unblock it when the number of cases surges. This is to test the effect of “herd immunity” without any anti-epidemic measures. . Jonathan Ashworth, a member of the British opposition Labour Party, called it “unbelt and slam on the brakes.”

Judging from the data after the unblocking, the UK seems to have “passed through the barrier successfully.” Although the highly transmissible delta mutant strain dominates the UK epidemic almost 100%, the Wall Street Journal reported: “The latest data makes doctors and scientists optimistic that widespread vaccination and public caution can control the spread of the virus. “

The peak of the current round of the epidemic in the United Kingdom appeared on July 17, with more than 54,000 new cases in a single day, exceeding the number of reports from Brazil, India and other countries in the same period. However, on August 15 local time, the British “Guardian” based on public health data mapping showed that the number of new infections in a single day was halved to 26,750 cases, a decrease of 679 cases from the same period last week. 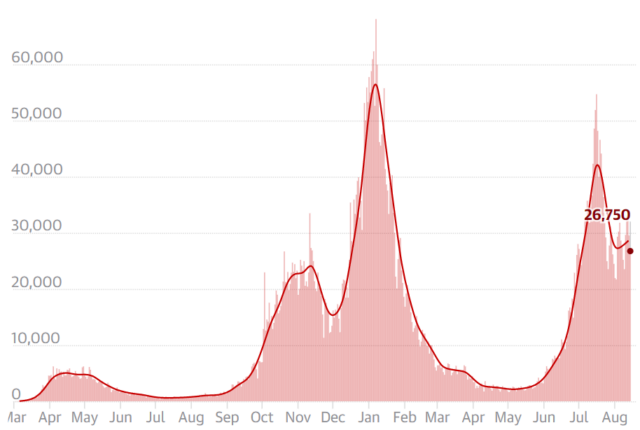 Picture description: As of August 15th local time, the number of new diagnoses (pink bars) and 7-day average increase (red curve) in the UK each day. /The Guardian

Except for people over 60 years old, the curve of the number of new infections in other age groups is going down. 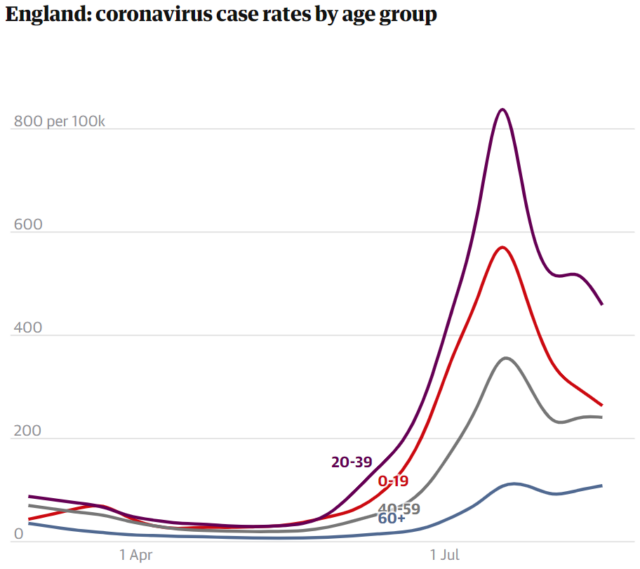 Picture description: As of August 14, local time, the curve of the number of infections per 100,000 people in all age groups in the UK. /The Guardian

“The most important thing is that the number of hospitalizations and deaths has not risen simultaneously, but there is a slight rise. This is the key.” Chen Zhengming, professor of epidemiology at Oxford University, told the BBC.

Among them, the curve of the number of hospitalizations has entered a “platform period” of growth, and it has not risen with the number of confirmed diagnoses that have risen again. 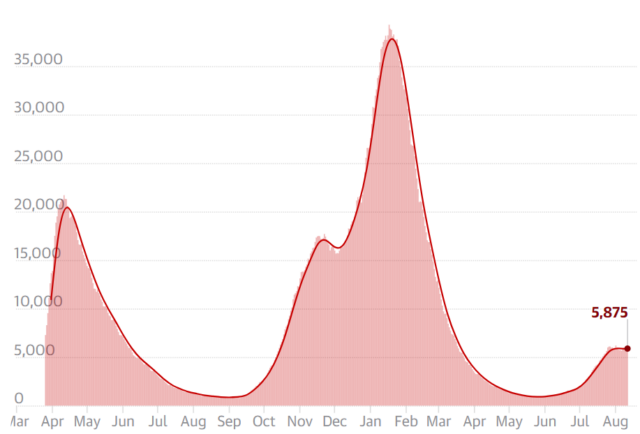 Picture description: As of August 12, local time, the number of hospitalizations (pink bars) and the average increase on the 7th (red curve) in the 14 days after the new coronavirus test was positive in the UK. /The Guardian 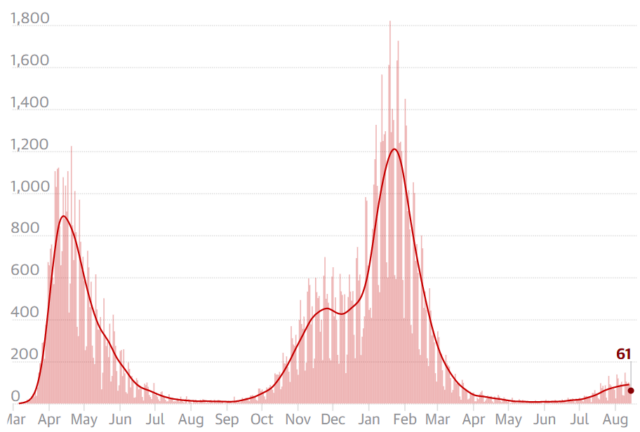 Picture description: As of August 15th, local time, the number of deaths (pink bar graph) and the 7-day average increase (red curve) after the UK’s new coronavirus test was positive. /The Guardian

The British “Guardian” compared the second and third waves of the country, and it can be seen intuitively that the growth curve of hospitalizations and deaths has been effectively suppressed.

Picture description: As of August 15 local time, the comparison of the number of hospitalizations (left) and deaths (right) in the second wave of the UK epidemic (grey line) and the third wave (red). /The Guardian

“Vaccines are ideal for preventing infection, but infection prevention has been not the point”

The BBC and The Wall Street Journal stated that the UK’s epidemic prevention results stem from widespread vaccination.

Up to now, more than 75% of the total population in the UK have received two doses of the vaccine, and 89% of adults have received at least one dose. British Health Minister Sajid Javid said that this means that Britain can safely return to freedom.

The latest data from the British Public Health Department and the University of Cambridge show that vaccination has prevented about 22 million British people from being infected, 66,900 people were hospitalized and 60,000 people died from the infection.

In addition, the 2021 “European Cup” has also played an active role in promoting the natural immunity of young people. Chen Zhengming told the BBC: “During the one-month European Cup, most of the diagnoses were young men. After the infection, most of them were mild or asymptomatic, and some were severe, but the case fatality rate was very low. This promoted natural’ to a certain extent. Herd immunity’.”

The Wall Street Journal cited statistics from the UK Statistics Office as saying that blood samples show that 90%-94% of British adults have a certain degree of immunity to the new coronavirus because they have been fully vaccinated or at least vaccinated, or have been infected. pass.

“After the expansion of vaccination coverage, the UK no longer focuses on infection prevention.” Chen Zhengming explained that vaccines can prevent infection is the most ideal, but the UK is mainly to prevent running on medical resources caused by infection, severe illness or death. It is the high-risk groups to protect.

High-risk population refers to those who are prone to severe illness or death after being infected with the virus, mainly the elderly or those with chronic underlying diseases. 90% of severe illnesses and deaths after infection in the UK come from this group of people.

“I guess that the UK may not report the number of infections in the future, because it is meaningless, just like the flu. It is more to detect deaths after hospitalization, and then make some (policy) adjustments.” Chen Zhengming said that Singapore is also adopting The way to treat the COVID-19 flu. “The steps of different countries are different, and we can learn from each other.” 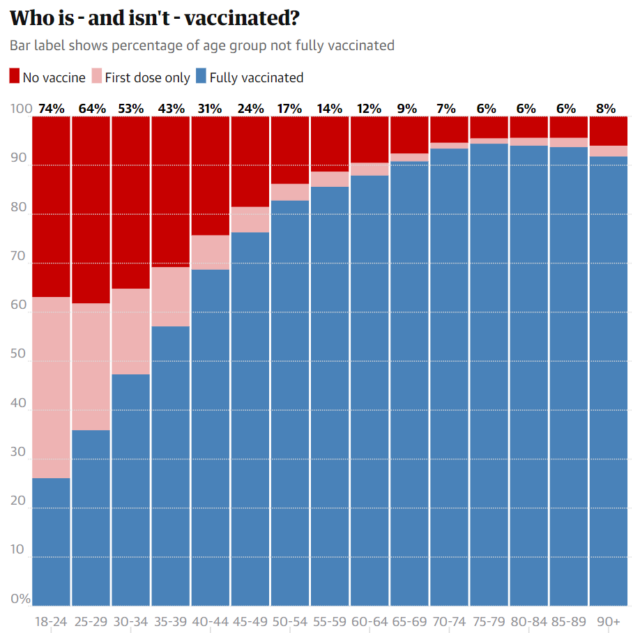 Photo caption: Vaccination status in England as of August 14th. The red column is not inoculated; the pink column is inoculated with one dose; the blue column is completely inoculated. /The Guardian

With the relaxation of self-isolation restrictions, regular inspections and quarantine have become a “key measure” for the UK to control the spread of COVID-19.

According to the information on the official website of the British government, in addition to the new coronavirus nucleic acid test for people with symptoms of infection, it is “recommended” that the public conduct regular self-screening to detect asymptomatic infections as soon as possible. The frequency is twice a week, and free quick screening kits provided by the government can be used.

As early as April this year, the United Kingdom began to promote “normalized self-screening for the new coronavirus.” People can apply for free test kits at testing centers, pharmacies, or online. It only takes 30 minutes to get the test result. 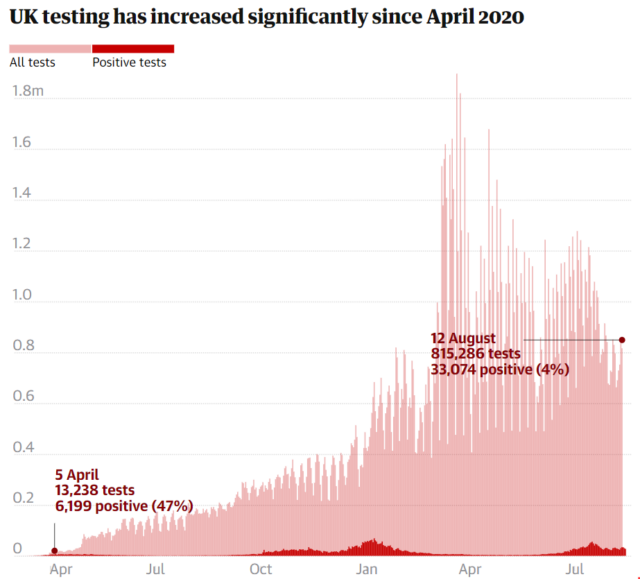 Picture description: As of August 15, the number of daily new coronavirus tests (pink bars) and positive numbers (red bars) in the UK. /The Guardian

“People’s enthusiasm for self-testing and the number of people has declined significantly.” The Guardian said that in March and April 2021, the number of daily tests in the UK once reached 1.6-1.8 million. However, since August, the number of tests in a single day has been less than one million, which has led to an increase in the positive rate of tests.

Tim Spector, the main leader of the ZOE medical organization “COVID Symptom Study” project and a professor of genetic epidemiology at King’s College London, said that the number of tests has been reduced, or someone has taken the initiative to delete the British national medical service system (NHS) official APP.

Irene Peterson, a professor of epidemiology and health informatics at University College London, pointed out that given past experience, the outcome of the British strategy is very uncertain. Part of it will depend on the extent to which Britons voluntarily comply with epidemic prevention measures and restrict their contact with others.

“The United Kingdom is an experimental field.” The Wall Street Journal reported that compared to other Western countries, the United Kingdom experienced the delta variant transmission earlier, and the coverage of vaccines is wider than that of many developed countries, including the United States. It also released a large amount of data so that people can closely follow the progress of the epidemic. This is also conducive to scientists from various countries to observe the extent to which the vaccine can progress COVID-19 to the level of common respiratory diseases. 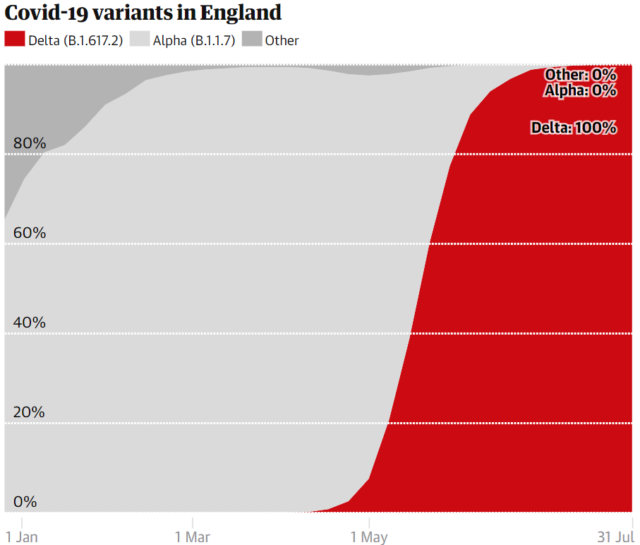 Picture description: As of July 31, the delta variant (red) has become a 100% prevalent strain in England. /The Guardian

Judging from the information published in the UK, the Parliament will continue to strengthen vaccination in the coming period.

In September, 32 million Britons will be vaccinated with booster shots. Including all people aged 50 and above, high-risk groups with immune system deficiencies, British NHS medical staff, nursing homes and nursing facility staff, etc.

In addition, the National Health Service of England will ensure that all 16 and 17-year-olds are provided with the first dose of the COVID-19 vaccine before August 23. In this way, this age group has the opportunity to obtain “critical” immune protection before returning to school in September.