Can onions and garlic reduce risks of many kinds of cancers?

Can onions and garlic reduce risks of many kinds of cancers? This time is not a rumor!

To this end, researchers from the State University of New York at Buffalo and the University of Puerto Rico conducted a case-control study in the Puerto Rican population to assess the correlation between them. Related research results were published in “Nutrition and Cancer”.

The Puerto Rican population has an advantage in examining the health effects of eating garlic and onions, because the population in this country consumes much more of these two than in Europe and the United States.

Onions and garlic are the key ingredients for Spanish tomato sauce (sofrito, which contains garlic, onions, paprika, bell peppers, coriander, peppers, and tomatoes, cooked with lard or olive oil), which is a commonly used seasoning for cooking in Puerto Rico.

Onions and garlic are also often used in the country’s “stews”, and Puerto Ricans often add garlic and onions to legumes and rice. In addition, the prevalence of breast cancer among Puerto Rican women is lower than that in the United States, which makes them ideal research populations.

How is the research done?

The researchers selected data from the “Atabey Breast Cancer Study,” a case-control study named after the goddess of fertility in Puerto Rico. The study was conducted from November 2008 to June 2014 and identified 314 breast cancer patients and 346 control participants through hospital and clinic records. The first group of patients are patients with incidental breast cancer and primary breast cancer, and they are between 30 and 79 years old. Participants in the control group had no history of cancer (except for non-melanoma skin cancer). They came from the same area as the previous group and matched their age.

Researchers collected information on their demographics, personal medical history, cancer family history and reproductive history, and assessed their eating patterns through a food frequency questionnaire, including asking them to make (purchase) in the past 12 months And how many times have you eaten Spanish tomato sauce, and the individual intake of garlic and onions.

The characteristics of the participants in the case group and the control group are shown in Table 1. The average age of the case group was 58.7 years, and the average age of the control group was 54.1 years. The former had a higher level of education. In addition, the two groups of participants also had significant differences in body mass index (BMI), physical activity (metabolic equivalent task-minute/week), and family history of breast cancer.

Table 1: Demographic characteristics of the participants in the case group and the control group 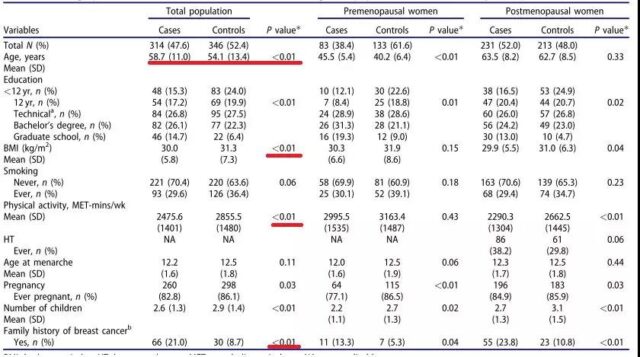 What did the research find?

▍Eating Spanish tomato sauce does have the effect of preventing breast cancer, but eating garlic or onion alone is not effective

After adjusting for age, BMI, family history, education, smoking status, and other factors, the analysis results show (as shown in Table 2) that compared with women who have never consumed Spanish tomato sauce, they consume more Spanish tomato sauce every day. The risk of breast cancer was reduced by 67% (OR=0.33, 95%CI: 0.11~0.99, Ptrend=0.02).

Although there is also a correlation between the consumption of garlic and onion and the risk of breast cancer, it did not reach statistical significance (OR=0.56, 95%CI: 0.19~1.61, Ptrend=0.18).

Table 2: The association between the consumption of garlic and onions (Spanish tomato sauce) and the risk of breast cancer

▍The more the total amount consumed, the better the breast cancer prevention effect, and the older girls, young women and aunts all benefit

The results of the correlation analysis between the participants’ total garlic and onion consumption and the risk of breast cancer are shown in Table 3.

Table 3: The correlation between total garlic and onion consumption and the risk of breast cancer, stratified by menopausal status

Researchers from Shanghai Center for Disease Control and Prevention, Vanderbilt University Medical Center and Shanghai Cancer Institute conducted a similar study in 2012. They selected 3443 breast cancer patients and 3474 control participants. The results of the study published in Cancer and Nutrition showed that compared with women who consumed less than 3 grams of allium vegetables per day, women who consumed more than 14.75 grams of allium vegetables per day had a significantly lower risk of breast cancer (OR= 0.83, 95%CI: 0.71~0.98).