The data of more than 1.44 million people found that yogurt and dietary fiber can reduce the risk of lung cancer by 33%!

Some time ago, a study published in the “Gut” magazine showed that men drinking yogurt can help prevent bowel cancer (click to view). In the past two days, Xiao-Ou Shu from Vanderbilt University analyzed the data of more than 1.44 million people from 10 prospective cohort studies in “JAMA Oncology” magazine and found that drinking yogurt can also reduce the risk of lung cancer!

What did the research find?

Dietary fiber and yogurt are the main sources of prebiotics and probiotics in the human diet. Previous studies have shown that prebiotics and probiotics can bring health benefits by regulating the intestinal flora and metabolic pathways, including reducing metabolic diseases, Cardiovascular disease, gastrointestinal cancer and risk of premature death.

The median dietary fiber intake was 18.4g/d; 62.2% of the subjects reported drinking yogurt, and the median intake was 23.3g/d.

The baseline characteristics of patients are shown in Table 1. It can be seen that those with higher dietary fiber or yogurt intake are more educated, have a healthier lifestyle, smoke less, drink alcohol and exercise regularly. 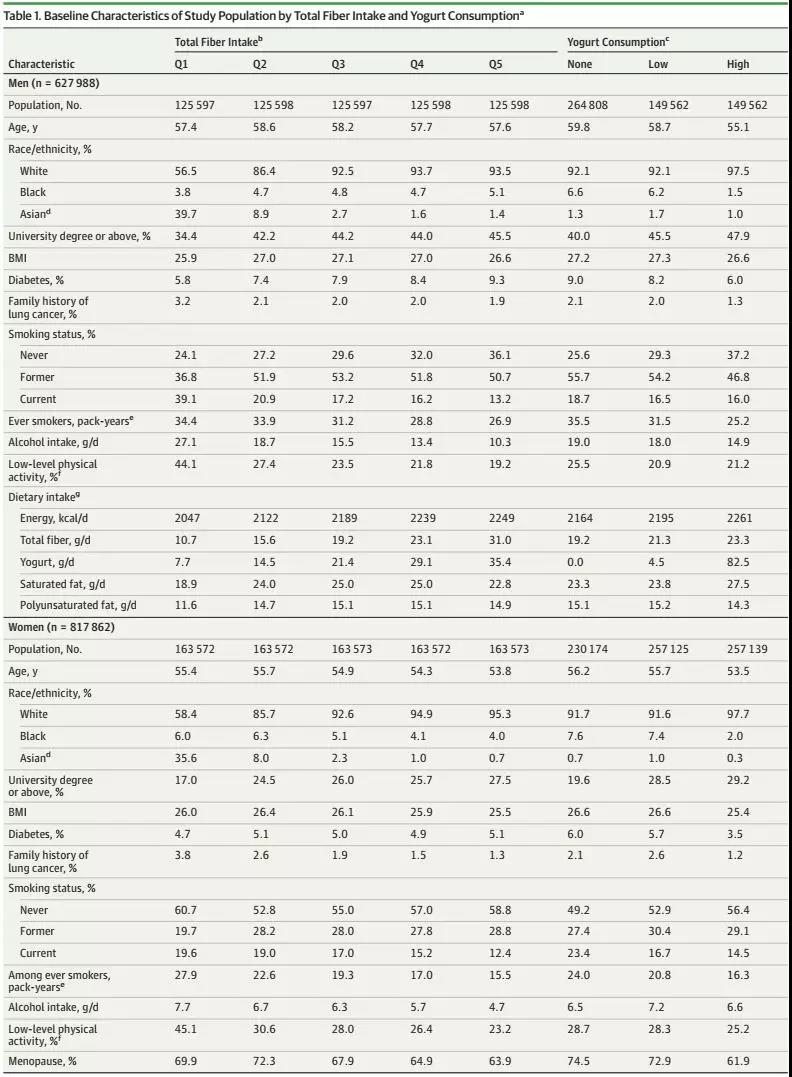 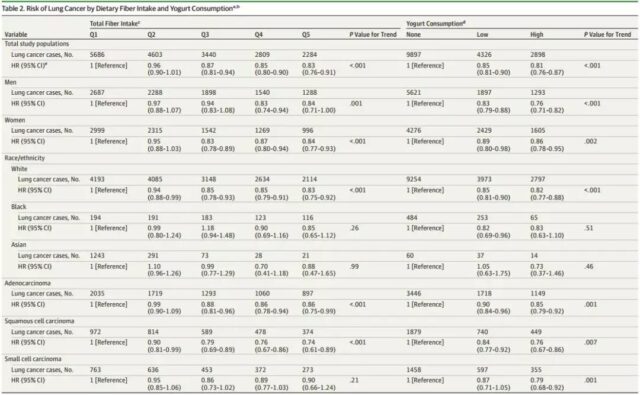 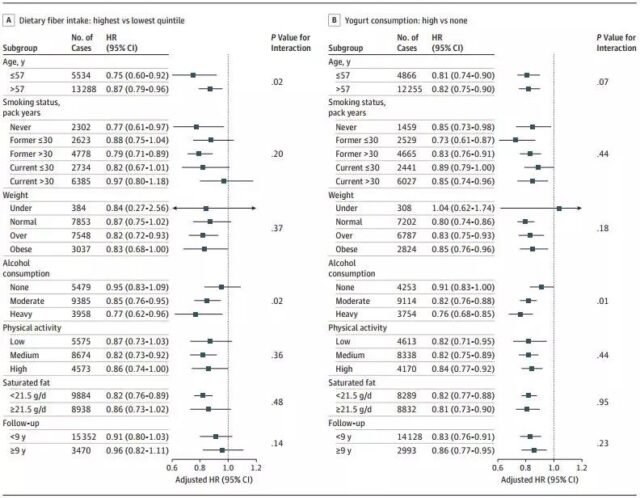 The study also found that there may be a synergistic effect between dietary fiber and yogurt (Table 3):

Why can dietary fiber and yogurt reduce the risk of lung cancer?

The researchers said that the health benefits of dietary fiber and yogurt may be derived from their prebiotic and probiotic properties, which can independently or synergistically regulate the intestinal flora.

Although dietary fiber cannot be digested by humans, it can be fermented by the intestinal flora to produce short-chain fatty acids. More and more evidences show that the beneficial effects of short-chain fatty acids on host immunity and metabolism are not limited to the intestines, but can reach multiple organs including the lungs. Animal studies have also shown that a fiber diet can reshape the immune environment of the lungs by changing the composition of the intestinal and lung microbiota.

Yogurt is a nutrient-rich food, usually containing specific strains of probiotics, and can also enhance the intestinal microflora. In addition, as an immunomodulator, probiotics mediate the secretion of cytokines and the proliferation and differentiation of immune cells. In vivo and in vitro studies have shown that certain probiotic strains can inhibit lung metastasis, enhance natural killer cell activity, and have anti-tumor and anti-inflammatory activities.

In this study, in patients with squamous cell carcinoma and pro-inflammatory diseases (such as people who drink a lot of alcohol), the negative correlation between lung cancer risk and dietary fiber and yogurt intake is more obvious, which indicates that dietary fiber and yogurt It may have a beneficial effect on the occurrence of lung cancer through anti-inflammatory mechanisms. Moreover, previous studies have shown that high-fiber diet and yogurt intake are inversely related to pro-inflammatory cytokines and inflammation.

In addition, more and more evidence shows that prebiotics and probiotics have a synergistic effect on host health. The fermentation of prebiotics can promote the colonization of healthy probiotics (such as bifidobacteria and lactobacilli) in the gastrointestinal tract, and can improve the intestinal microbial ecosystem, thereby enhancing the beneficial physiological effects of bacteria. This study also shows that the combination of prebiotics (fiber) and probiotics (yogurt) may be more resistant to lung cancer than either ingredient alone.

All in all, the results of the study suggest that increasing the intake of prebiotics and probiotics has a potential effect on the prevention of lung cancer.

What else can be done to prevent lung cancer?

Lung cancer is the malignant tumor with the highest morbidity and mortality in some countries. Simple dietary adjustments can greatly reduce the risk of lung cancer. It is not good news. However, in addition to diet, lung cancer risk is also related to living environment and occupation. According to the 2019 version of “Recommendations for Screening and Prevention of Common Malignant Tumors in Residents”, the following 5 points should be achieved to prevent lung cancer:

1. Do not smoke or quit smoking;
2. Take protective measures for occupational exposure hazards;
3. Pay attention to avoid indoor air pollution, such as passive smoking, open flames for heating, exposure to oil fume, etc.;
4. When the atmosphere is severely polluted, avoid going out and exercising;
5. Patients with respiratory diseases should be treated in a timely and standardized manner.

In addition, for high-risk groups, active screening should be carried out for early detection and early treatment:

Those who are >40 years old and have at least one of the following risk factors:

1. Smoking ≥20 years package, including those who have quit smoking for less than 15 years;
2. Passive smokers;
3. Persons with occupational exposure history (exposure to asbestos, beryllium, uranium, radon, etc.);
4. Those who have a history of malignant tumors or a family history of lung cancer;
5. People with a history of chronic obstructive pulmonary disease or diffuse pulmonary fibrosis.

Note: Annual pack: refers to the number of packs smoked per day multiplied by how many years lasted. For example, a 20-year pack means 1 pack per day for 20 years or 2 packs per day for 10 years.