When antiretroviral therapy called pre-exposure prophylaxis (PrEP) was introduced nearly ten years ago, patients were suddenly able to achieve almost complete protection from HIV infection by taking only one pill a day. But there is a big problem. Not everyone is equally diligent in adhering to the once-a-day medication regimen, and when the dose is insufficient, the protective effect of PrEP will be greatly weakened.

In a new study, researchers from the United States, Brazil, Peru, and Argentina may have solved this problem: a pioneering injectable PrEP that is injected every eight weeks. This three-year real-world study has just concluded and the results show that when patients are injected with PrEP every two months, their HIV risk is ultimately 66% lower than those who have been trying to rely on only one pill a day. The relevant research results will be published in the NEJM Journal on August 12, 2021.

The corresponding author of the paper, Dr. Raphael Landovitz of the University of California, Los Angeles, explained, “This difference in effect is mainly driven by the’coverage’ of sexual behavior.” Landovitz said, in other words, when patients do not take them daily as prescribed PrEP tablets, “that’s when it’s “failed”.” However, when the same patients are injected with long-acting PrEP, they can basically guarantee that there is a protective drug in their body for two months. They “cover” them when they are in close contact with another person.

In this new study, Landovitz and his team reported on their efforts to test the effectiveness of injectable PrEP in more than 4,500 patients. The average age of these patients is 26 years old, and about 4,000 of them are gay or bisexual; fewer than 600 are transgender women.

About half of the patients were randomly assigned to take a pill regimen called Truvada, which is a specific combination of several antiretroviral drugs. The remaining patients received 600 mg of cabotegravir (cabotegravir) injection, which is a long-acting antiretroviral drug mixture. After three years of follow-up investigation, a total of 52 participants were newly diagnosed with HIV: 39 belonged to the Truvada group, while only 13 belonged to the Cabotwe injection group. 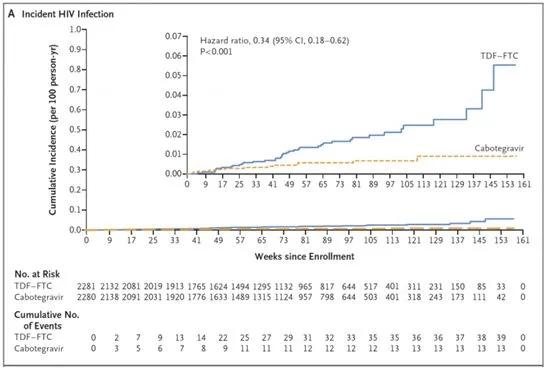 Landovitz said that in addition to solving the “compliance problem,” the injection program has another important benefit: the right to decide. Landovitz pointed out that regardless of the approach taken, “PrEP as a concept confers autonomy because it allows those who may or may not have a say when deciding whether to have sex or whether to use a condom to protect themselves from HIV infection. For those who cannot, do not use or do not want to use condoms for many reasons, PrEP can prevent HIV infection.”

But he said that injections are a better way to achieve these goals, because “you don’t have to carry the medicine bottle with you, risk letting others judge why you are on the medicine bottle, what this might mean, and even make your partner feel uneasy or violent. .”

So, when can this injectable PrEP be used? Landovitz pointed out that his team’s method is currently under review by the U.S. Food and Drug Administration (FDA) and is expected to make a decision by the end of this year or early 2022. This will make Cabotweir the first of several injectable PrEP versions already in development.

Dr. Quarraisha Karim, professor of epidemiology at Columbia University, wrote a review article titled “Enhancing HIV Prevention with Injectable Preexposure Prophylaxis” in the NEJM journal at the same time regarding this research. She said this may have an additional benefit, which is to increase the number of high-risk patients who decide to use PrEP for protection in the first place. In her review article, Karim described the need to persist in taking pills as the “main disadvantage” of oral form of PrEP, and believes that the injectable regimen is “very suitable for people who can’t insist on taking pills every day.”

Karim wrote that all of this is good because “PrEP coverage needs to be substantially increased in order to achieve the global goal of reducing HIV infection.” She added, “Expanding PrEP options with long-acting agents such as Cabotwe for injection is a step in the right direction on the road to ending the public health threat of AIDS.”