DNA itself cannot directly affect the human body, all kinds of proteins are the substances that can influence the appearance.

mRNA is an intermediate in the conversion of DNA to protein. mRNA is similar to an instruction manual and can instruct one’s own cells to produce a specific protein, but the changes in mRNA will not be inherited by new cells produced by division, nor will it be inherited to the next generation of individuals. The protein is the final production tool, which has a direct effect on the various indicators of the individual organism. This transcription and translation chain is called the “central law” of biology.

The mRNA fragments in the mRNA vaccine encode certain proteins or receptors on the surface of the new coronavirus.

Vaccines deliver artificially edited mRNA into human cells, where they “borrow” the body’s own cells to translate mRNA into proteins. After translation, this type of mRNA will be expressed as a certain antigenic protein possessed by the virus. Although the produced antigen is produced by its own cells, the TLR in APC does not recognize this sequence due to its exogenous amino acid sequence, so it still stimulates the specific immune response of B cells and T cells against this antigen protein. And establish immune memory. 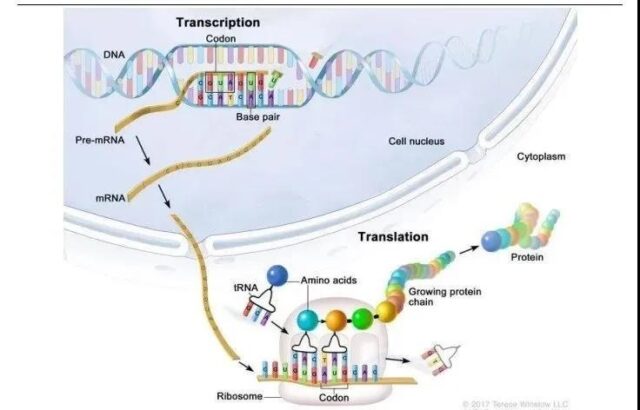 For the mRNA vaccine to work, the edited mRNA must first be transferred into the cytoplasm.

As a macromolecule, mRNA can only enter and exit cells through endocytosis without damaging the cell membrane. In order to ensure that the mRNA remains intact before translation, the mRNA needs to break the envelope of the inclusion body and escape before combining with the lysosome. After escaping from the inclusion body and entering the cytoplasm, the mRNA will swim in the cytoplasm until it reaches the ribosome and is translated into a peptide chain there, and finally folds into a protein.

For mRNA vaccines and drugs, the delivery system has two responsibilities: one is to effectively package and protect the mRNA to maintain stability before reaching the target, the other is to help the effective components of the mRNA enter the cell, and the third is to release the mRNA before it reaches the lysosome. In the cytoplasm.

LNP is currently one of the most potential delivery vehicles. LNP is the general term for lipid particles, which also includes lipid micelles, liposomes, and so on. The composition of LNP is similar to that of cell membrane, and both are composed of lipid molecules. The two long tails of lipid molecules are usually parallel, and the bilayer formed by lipids is stable. After entering the acidic environment of the cytoplasm, the heads of some lipids are protonated and present in a cationic form, attracting other lipid molecules in the negative ion state, and the tails are opened. The original form of the bilayer is destroyed, forming a ring with the heads gathered together. The previously wrapped mRNA can escape the inclusion body and enter the cytoplasm to wait for translation.

2.  Analysis of the advantages and disadvantages of mRNA vaccines

mRNA is to inject the mRNA encoding viral antigens into the body, and the corresponding antigens are produced by the body’s own cells to activate specific immunity.

The mRNA vaccine can present more antigens, and at the same time, it can activate and consolidate specific immunity for a longer period of time. The reason is that the process of mRNA vaccine antigen presentation can be short-lived and the presented mRNA can guide multiple ribosomes to produce antigen proteins until the mRNA is degraded.

Since cells can continuously produce antigen proteins based on mRNA, the number of antigens is less limited by the vaccine dose. From the time dimension, antigens will not be consumed quickly in a short period of time. The higher the number of antigens and the longer the retention time, the stronger the specific immune memory formed, the faster the immune response and the longer the duration.

DNA vaccines need to deliver the encapsulated active ingredients through a multi-layer barrier, which makes it difficult for the active ingredients to enter the reaction site, and immune activation is even more difficult. The foreign material introduced by the mRNA vaccine does not need to enter the cell nucleus, and the probability of reverse transcription of foreign genetic fragments into the body’s own DNA is small, so the probability of causing tumors and cancer is extremely small.

mRNA vaccine vs. viral vector vaccine: the applicable population coverage is comprehensive, the risk of reverse transcription is small, and the opportunity cost is lower

LNP provides support for delivering mRNA fragments to the target and targeted release.

In contrast, the structure of LNP is composed of lipid molecules, and the carrier has a lower probability of causing an immune response, and can more effectively deliver the effective ingredients to the target. Viral vector vaccines have a higher opportunity cost. When the human body receives the virus vector vaccine injection, the body will automatically produce antibodies against this vector and other specific immune responses. Later, when the same or similar viral vector is used as a delivery system for drug delivery, it will be more susceptible to attack by the immune system, and it will be difficult to successfully deliver the drug to the target.

Stock solution preparation starts with plasmid construction. The commonly used DNA plasmid is a circular plasmid, which contains a designed sequence module. The electric current is used to break the cell membrane, and the circular DNA plasmid is introduced into E. coli. Escherichia coli is stored in a solution containing a lot of nutrients for reproduction and expansion. Extract and purify the DNA plasmid, filter the solution to remove bacteria and other substances. Enzymes are used to cut the purified circular DNA plasmid into strands. The obtained solution is packaged and refrigerated, passed through the quality control link, and transported to the next stage of production and processing sites. 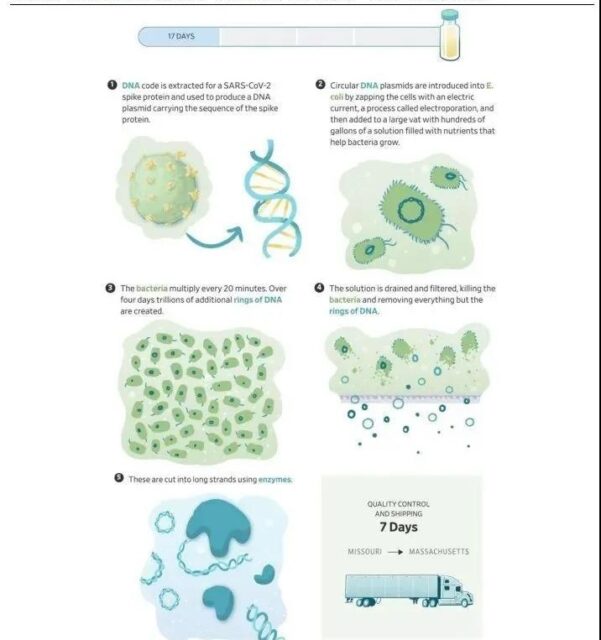 The purpose of the second stage is to convert the DNA strands into mRNA. The DNA strand prepared in the previous step is mixed with enzymes and nucleotides in a 10-gallon container, and RNA polymerase will transcribe the DNA into mRNA. After the mRNA is obtained, DNA and other substances will be filtered out, and the mRNA will be packed into a plastic package the size of a shopping bag. Each bag contains about 5 to 10 million doses of mRNA raw material.

The purpose of the third stage of the process is to encapsulate the mRNA into a lipid carrier (LNP). Lipids are suspended in an alcohol solution, contact and wrap the mRNA, and the two substances are attracted by opposite charges. After that, the stock solution is subjected to tangential flow filtration (TFF) to filter out excess lipids, alcohol and other impurities in the solution, and make the final mRNA vaccine solution. This stage is one of the biggest bottlenecks in the production of mRNA vaccines. One of the important reasons is that there are limited manufacturers of lipids on the market, so Pfizer has begun to develop and manufacture lipids independently.

After the above three production stages are completed, the mRNA vaccine stock solution has been completed, and it is only waiting to be filled and distributed. Subsequently, after 2 weeks of purity testing and other safety tests, the vaccine can be sold all over the world. All the above production and filling links took about 64 days. 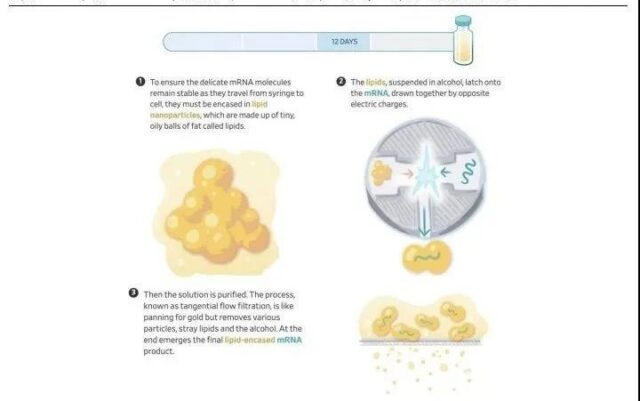 The structure of the mRNA sequence determines the structure, immunogenicity and stability of the antigen protein

The coding region determines the amino acid sequence in the protein. Part of the codon combination will be translated into the same amino acid, but in different biological groups, there will be a preference for a certain codon set. This codon combination has less immunogenicity and is not easy to be attacked by enzymes. Its synonymous codons may cause allergic reactions and lead to quality degradation. Therefore, CAA is more likely to trigger an immune response.

Therefore, mRNA vaccines need to choose the synonymous codons that are closest to human origin and avoid combinations that may cause allergic reactions to ensure safety and translation quality. The non-translated region regulates the stability and expression efficiency of mRNA and protein.

The mRNA sequence is the focus of vaccine research and development, and it is also the core of competition in the industry. In addition to containing the antigen protein code, other parts of the sequence also directly affect the quality of the mRNA vaccine.

The non-translated regions before and after encoding are responsible for regulating translation and protein expression, and have an impact on the translation efficiency, half-life, and maximum expression level of mRNA. The GC level and U level in UTR will affect the immunogenicity of mRNA, and affect the safety of the vaccine and the normal production of antigens. UTR needs to be included in the sequence when the DNA plasmid is established and is part of the sequence design.

Poly A tail can improve the stability and translation efficiency of mRNA. Adenosine can reduce the efficiency of ribonuclease, thereby slowing down the degradation of mRNA. The poly A tail can be directly included in the code when the DNA plasmid is established, or it can be added to the mRNA tail by polymerase after the DNA is transcribed into mRNA.

The 5’cap structure at the front end of the mRNA has a positive effect on reducing the immunogenicity of the mRNA, enhancing the stability and translation efficiency. During in vitro transcription, the 5’end of mRNA will contain a triphosphate moiety, which is highly immunogenic. The capping process can be carried out during or after the production process where DNA is transcribed into mRNA, and the 5’cap structure is fixed to the 5’end of the mRNA in the correct direction using anti-reverse cap analogs. However, this process cannot guarantee that the triphosphate is completely removed, so there is still the risk of causing an intracellular immune response. Therefore, the capping process has a direct impact on the safety of the vaccine.

Delivery system is the bottleneck of current capacity expansion

One of the major difficulties as the delivery medium of mRNA vaccines is that after the mRNA enters the cytoplasm in the form of inclusion bodies, the envelope of the inclusion bodies needs to be broken to release the mRNA. At present, there are few LNP suppliers, and patent disputes among them have therefore become a major constraint to the rapid increase of the mRNA COVID-19 vaccine.

When other vectors have obvious disadvantages, LNP is one of the best choices for mRNA vaccine delivery. Therefore, each manufacturer’s mastery of LNP technology and whether they have related patents has become an extremely important part of the competition in the industry. The LNP technology patent determines the position of mRNA vaccine companies in the industry’s competition.