In the face of the COVID-19 pneumonia epidemic, various anti-science and anti-common sense epidemic prevention and chaos have emerged in the United States. There were ridiculous precedents such as injection of disinfectants.

According to a report by the ABC on the 21st, health officials in Mississippi said that because someone took ivermectin products used to deworm livestock to treat or prevent COVID-19 pneumonia, relevant agencies in the state have recently received more and more use of this product. Suspected of poisoning after drug-like drugs for help.

The report pointed out that the phenomenon of indiscriminate use of the drug during the epidemic has always existed. In fact, the US Drug Administration warned in March not to use “unconventional therapies,” including the use of ivermectin, that are not approved or authorized by the agency to treat or prevent COVID-19 pneumonia, saying that they may “cause serious harm.”

The US Food and Drug Administration issued this warning because there were multiple reports at the time that someone needed medical treatment or even hospitalization after taking ivermectin for horses.

After many Americans were infected with the COVID-19 and were poisoned by ivermectin, which was used to deworm their livestock at home, the U.S. Food and Drug Administration (FDA) reluctantly tweeted on the 21st local time to discourage people from taking the drug.

According to the US “Capitol Hill” report, Mississippi Poison Control Center has recently received reports of suspected poisoning calls after taking ivermectin. The state health department said that at least 70% of the calls for help received recently are related to the ingestion of “veterinary or veterinary ivermectin” by residents. According to the report, 85% of callers have mild symptoms of poisoning, and only one person needs further assistance due to the excessive dose of the drug, and no one needs hospitalization for the time being.

According to reports, the symptoms of poisoning after ingesting ivermectin include skin rash, nausea, vomiting, abdominal pain, neurological disorders and even severe hepatitis.

The report also stated that the letter sent by the Mississippi State Department of Health was signed by the chief epidemiologist Paul Byers of the state government. Patients should be advised to take any drugs originally used to treat animals, and they should be instructed to take only the ivermectin prescribed by their doctors.”

On the 21st local time, the U.S. Food and Drug Administration began to reluctantly dissuade it on Twitter.

“You are not a horse, and you are not a cow. Seriously, you should stop (taking ivermectin).” “The description article. It pointed out that the FDA has received multiple reports that some patients urgently needed medical assistance after taking ivermectin for horses and were subsequently hospitalized. 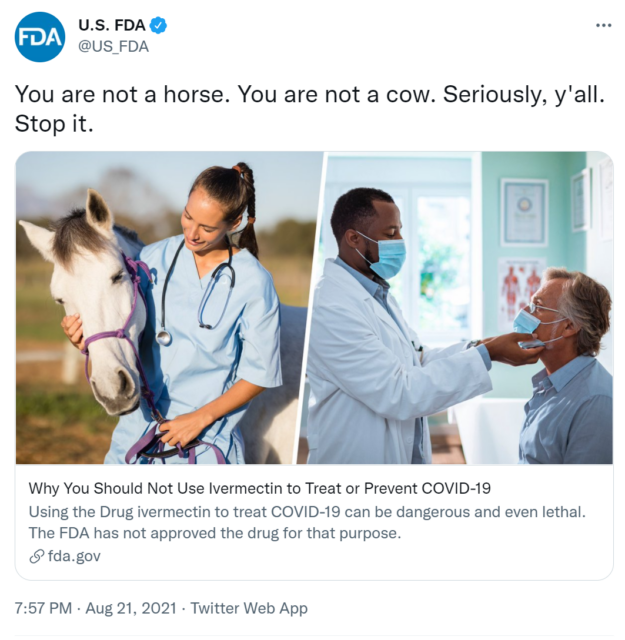 The note also stated that the FDA has not yet approved the use of ivermectin for the treatment or prevention of COVID-19. Ivermectin is often used in the United States to treat or prevent parasites in animals. Public information shows that Ivermectin is a broad-spectrum antiparasitic drug, which is widely used in gastrointestinal nematodes, lung nematodes and parasitic arthropods in cattle, sheep, horses and pigs, intestinal nematodes in dogs, and ear mites. , Scabies, heartworms and microfilaria, as well as poultry gastrointestinal nematodes and ectoparasites. Ivermectin is also a human version, which is mainly used to treat external parasites, such as head lice. Its dose concentration is significantly lower than the veterinary version, and there is no evidence that it has an effect against the new coronavirus.

“Taking this drug in large doses is dangerous and may cause serious harm.” The FDA also wrote in the clarification statement.

Under the FDA tweet, some American netizens wrote: “It is incredible that people will reject a vaccine that has been proven to be safe and effective, but will take drugs for livestock. What is going on?” ↓