“The Lancet Oncology”: The early symptoms of cancer may be more than you think! Knowing it a long time ago is help!

The Lancet: The early symptoms of cancer may be more than you think!  Early diagnosis and intervention is increasingly becoming part of the global cancer control strategy. Many types of cancer are detected early, and the 5-year survival rate is more than 90%.

However, regardless of daily hearing or various medical sciences, there is often a sentence: XX cancer has no specific symptoms in the early stage, and once it is diagnosed, it is in the middle and late stages…

In the face of advanced cancer, various treatment strategies are quite limited in improving survival and prognosis.

A few days ago, “The Lancet” published an article revealing the relationship between 20 common cancer symptoms and 12 cancer types.

What are the symptoms of advanced cancer? Is it specific? 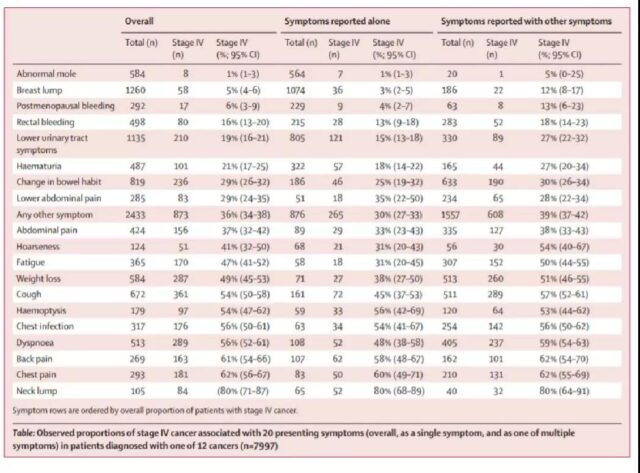 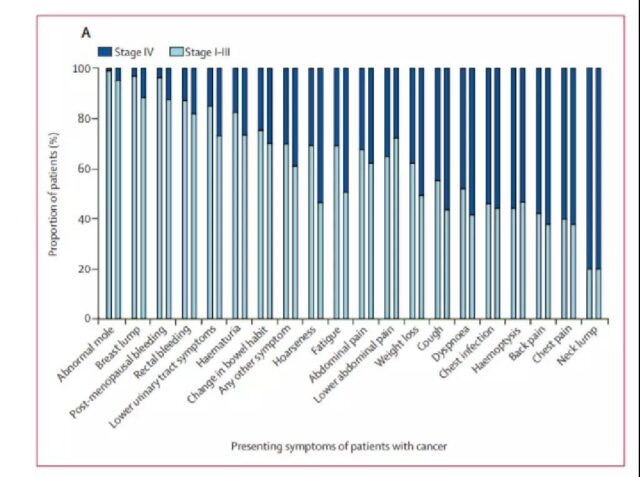 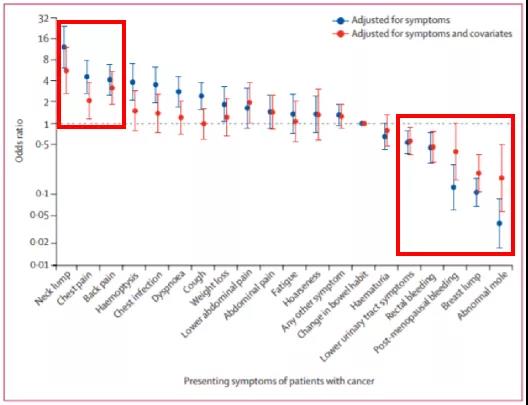 After statistical calibration, the three symptoms of neck lumps, chest pain, and back pain are associated with an increased probability of diagnosing stage IV cancer, while abnormal moles, breast lumps, abnormal menopausal bleeding, and rectal bleeding are relatively more likely to be diagnosed with stage IV cancer. Low.
This conclusion seems to be far away from our usual cognition.

The reason may be that in the United Kingdom, cervical cancer, breast cancer, and bowel cancer are national screening programs. Symptoms related to these three cancers are: abnormal menopausal bleeding, breast lumps, and rectal bleeding. Most of them are screened early. The diagnosis was confirmed during the inspection, so the diagnosis of stage IV tumor symptoms is less relevant. However, more than 90% of cancers in the UK are still diagnosed by non-screening methods. Finding more effective early screening methods is currently an active work in various countries.

Most of the lumps are single, most of them are painless lumps. A few are accompanied by dull pain or tingling, irregular edges and uneven surface. If there are “dimple-like” or “orange peel-like” changes in the breast skin, it is recommended to seek medical attention. .

Suggestion: If a female friend finds a lumps in the breast, she should consult a doctor in time for further examination to clarify the cause.

Chronic atrophic gastritis may be a precancerous lesion of gastric cancer.

Most patients with chronic gastritis receive regular integrated traditional Chinese and Western medicine treatment in a timely manner, the effect is relatively good, and it will not cause cancer.

Recommendation: To diagnose whether there is gastric cancer, gastroscopy must be performed.

Indigestion, difficulty swallowing, hoarse voice, beware of esophageal cancer and laryngeal cancer. The above two symptoms are very common in life, and there are many causes, but if there is a long-term unexplained persistent indigestion, you need to consider the possibility of gastric cancer.

Suggestions: long-term difficulty swallowing, pain in the back of the sternal bone and foreign body sensation in the esophagus when eating. Vegetable leaves, fragments or rice grains on the wall of the esophagus may also be felt when not eating. After swallowing food, the food will feel slow down and even stay in the esophagus. Should receive X-ray chest X-ray or gastroscopy as soon as possible. If symptoms such as hoarseness, sore throat, irritating dry cough, or blood in sputum, foreign body sensation in the pharynx, etc. occur, symptomatic treatment does not improve, or the symptoms persist for more than 1 month, detailed laryngoscopy should be performed.

Suggestion: As long as there is hematuria, regardless of the amount of it, even if it is not painful, only once for a long time, it should be a high level of vigilance. You should go to a major hospital for examination as soon as possible.

Lymphoma most often starts with enlarged lymph glands (nodes), especially in the neck, underarms, or groin.

If the lymph nodes are swollen for a short period of time, they feel soft and feel painful or tender, they are generally benign; if the lymph nodes in the neck, axilla or inguinal do not disappear for a long time, they are hard and fixed, with uneven surface, no pain or tenderness, and Gradually increase, you must be alert to the possibility of tumors.

Suggestion: If there are swollen lymph nodes in one or more places, with hard texture but no pain, it should be cardiac lymphoma, and it is best to go to the hospital for examination in time.

Most of the lung nodules are benign, and only a small part are precancerous or lung cancer. Therefore, not all lung nodules need to be surgically removed.

Unlike colds and bronchitis coughs, this irritating cough cannot be relieved with antibiotics, usually intermittent hemoptysis or bloodshot sputum, or cough with a lot of foamy sputum, accompanied by throat wheezing, chest tightness, shortness of breath, etc. , The weight has dropped significantly in the short term, and there is an unexplained low-grade fever. If the above symptoms persist for 2 to 3 weeks and do not relieve, it is recommended to seek medical attention.

Suggestion: If you find a lung nodule, don’t panic too much and don’t ignore it. Further diagnose in time to clarify the nature, and observe or treat according to the actual situation. People over 40 years old or high-risk people with a family history of lung cancer should try to do low-dose spiral CT screening for early lung cancer once a year.

Long-term constipation, diarrhea, blood in the stool or dark or black color, be wary of colon cancer and rectal cancer. Changes in stool shape, color, and bowel regularity are the most direct early manifestations of colorectal cancer.

However, blood in the stool is a clinically more complicated symptom. Hemorrhoids and upper gastrointestinal bleeding may also be caused, but the characteristics and colors are different. If you only find blood in your stool, don’t panic too much, just follow the doctor’s guidance.

Recommendation: Adenomatous intestinal polyps are “time bombs” and require timely surgical removal. Patients with intestinal polyps should stay away from cooking methods such as frying, smoking, fire roasting, and tobacco and alcohol.

People over 40 years old, if loose stools, mucous stools, pus and blood stools, or blood in the stools, bright red or jam-colored, long-term lower abdominal discomfort, such as abdominal distension, abdominal pain, abdominal ringing or dull pain, and the cause is unknown Anemia, weight loss, weakness, lumps can be felt in the abdomen, and immediate medical attention is required.

Painless skin keratinization may be an early sign of skin cancer.

General specific symptoms include: round skin rash-like abnormal changes, local flatness or swelling, brown-yellow or black crusts on the surface, the patient has no pain, and mostly occurs on the face and back of the hands.

Pay attention to these problems when you have moles on your body!

Suggestion: If this kind of keratosis occurs on the skin, first go to the dermatology department of a regular hospital to see a doctor.

Junction moles may be precancerous lesions of melanoma.

Suggestion: Don’t irritate the moles on the body by repeated rubbing and needle picking, and don’t use drugs to corrode it. These may be the incentives for the junctional moles or mixed moles to become melanoma.

Unexplained white plaques in the mouth, especially those who smoke regularly, may be suffering from oral leukoplakia. If they are not treated in time, they may become cancerous and may even face the serious consequences of surgical bone resection. It is understood that the tongue, gums, and mucous membranes on the cheeks may be breeding grounds for oral leukoplakia.

Oral ulcers usually heal on their own within 10 days, and ulcers that do not heal for a long time may be tuberculous ulcers or cancer. If the ulcer is accompanied by repeated bleeding and unexplained numbness, burning, and dryness, and it does not heal for more than two weeks, be alert.

Suggestion: When you find leukoplakia, don’t mistake it for ulcers and treat it in time; don’t scrape the leukoplakia with your nails; stop smoking, otherwise it will accelerate the deterioration of the leukoplakia. The general public lacks awareness of oral leukoplakia, the earlier it is detected and treated, the better it can be controlled.

Inexplicable bleeding in the vagina, be wary of cervical cancer and endometrial cancer. Some women have a small amount of vaginal bleeding after sexual intercourse, gynecological examination, or forced defecation, which is light red or brown, which is “contact bleeding” and may be a signal of precancerous lesions of cervical cancer.

Vaginal bleeding is generally less, then more, or sometimes more and sometimes less, and the bleeding will increase significantly when the disease progresses to the middle stage. At this time, you should go to the hospital for inspection in time, and insist on re-examination for 4 to 6 months. Irregular vaginal bleeding or bloody leucorrhea after menopause, after excluding cervical cancer and vaginitis, endometrial cancer should be highly vigilant.

Pain in urination, hematuria, and changes in urine volume. Be wary of bladder cancer, prostate cancer, and kidney cancer.

Urinary frequency, urgency, pain and other symptoms of bladder irritation, as well as urinary retention may be early symptoms of bladder cancer. The early manifestations of prostate cancer patients are mostly bifurcation, prolonged urination, frequent urination, urgency, dysuria, incomplete urination, etc. Hematuria is not the main symptom. Ejaculation pain during sex, or bleeding semen also need to be vigilant. The early manifestations of kidney cancer are not typical, and some people will have hematuria and painless intermittent attacks.

Recommendation: All the above manifestations should be confirmed by a doctor.

The early pain of bone cancer is fixed and persistent, especially at night, and it is getting worse day by day. When you feel pain and swelling in the back, limbs, joints, etc., and cannot find the inducement of trauma, inflammation, wind and cold, you must be vigilant.

The pain of testicular cancer is often local dull pain, swelling pain, and the pain is not very strong. It can be found asymmetry when touching the testicle with the hand. The volume of the affected side increases, and there is a feeling of falling.