New AI blood detection technology accurately recognizes lung cancer.  Lung cancer is the cancer with the highest number of deaths in the world. According to the latest global cancer burden data released by the World Health Organization’s International Agency for Research on Cancer (IARC) in 2020, about 1.8 million people worldwide will die of cancer in 2020, accounting for the total number of cancer deaths. 18%.

In recent years, the incidence of lung cancer has increased year by year, and many patients are already at an advanced stage when diagnosed, which has further led to a decrease in survival rates. Although low-dose computed tomography (LDCT) of the chest for lung cancer screening can reduce mortality in high-risk groups, LDCT has radiation and has a high false-positive rate.

Therefore, there is an urgent need to develop new methods to screen high-risk individuals and the general population for cancer. The development of biomarkers (proteins, antibodies, gene expression profiles, miRNAs, etc.) for early detection of lung cancer has a wide range of clinical applications in screening and distinguishing cancer and non-cancerous lung nodules on chest imaging, but there is currently no It is approved for clinical use.

Liquid biopsy analysis has identified cancer-related features in peripheral blood cfDNA fragments, and has provided a new way for non-invasive detection of cancer. Mutations or methylation in circulating tumor DNA (ctDNA) can be directly detected in early-stage lung cancer patients, but many cancer patients may also be missed, and it may be necessary to sequence white blood cells to eliminate changes caused by clonal hematopoiesis.

The research team has previously developed a method for analyzing cfDNA fragmentation profiles with whole-genome technology-DELFI (for early DNA evaluation of intercepted fragments). DELFI provides a view of cfDNA “fragment groups”, with the potential to identify a large number of tumor-derived changes in circulation.

First, the research team examined blood samples of 365 individuals from a Copenhagen hospital (LUCAS cohort). The cohort includes patients with malignant and benign lung nodules as well as non-cancer individuals. They used the DELFI method to examine 473 non-overlapping regions with high mappability. Each region contains about 80,000 fragments and spans about 2.4 GB of the genome.

The resulting fragmentation profile is very consistent among non-cancer individuals, including those with non-malignant lung nodules. In contrast, cancer patients exhibit extensive genome-wide variation. Next, they performed principal component analysis (PCA) to identify linear combinations of fragmented features. Then, they incorporated this dimensionality reduction step into the machine learning model to generate a score (DELFI score) for each person. 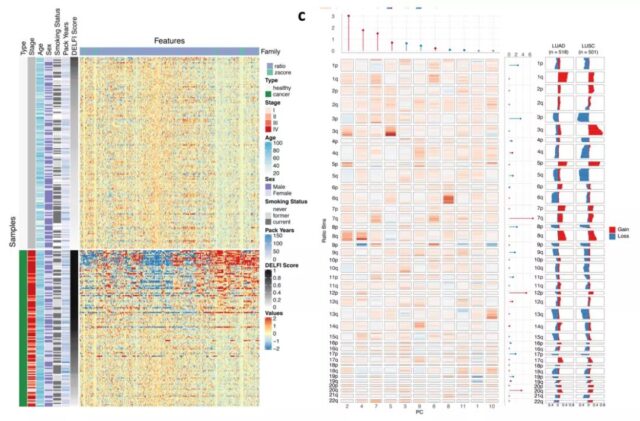 Next, the research team examined the relationship between DELFI scores and cancer stage and histology. Although non-cancer individuals have lower DELFI scores, cancer patients have significantly higher median DELFI scores. The area under the curve (AUC) for identifying the sensitivity and specificity of cancer patients is 0.90. Stage I cancers are more difficult to identify, but stage II, III, and IV cancers have similar high performance.

Subsequently, the research team assessed whether the genome-wide fragmentation map can be used to non-invasively distinguish these cancer types. They used RNA-seq data from TCGA to identify ASCL1 as the most differentially expressed gene. They used the fragment information in the ASCL1 binding region to create a classifier that can be used to accurately detect 10 of 11 SCLCs (with a sensitivity of 91%) and 158 non-cancer individuals (with a specificity> 99%). In addition, comparing SCLC patients with other DELFI-positive cases without SCLC, it has a higher accuracy (100% sensitivity, 95% specificity). These findings indicate that the fragmentation profile can reflect cell-type-specific genome-wide transcription factor binding and provide a non-invasive method for distinguishing lung cancers with different histological subtypes.

Finally, the research team checked the performance of the DELFI method or the combined DELFI/LDCT method. Performance analysis of LDCT alone in the LUCAS cohort showed high sensitivity and low specificity. In a model that uses the DELFI score to pre-screen patients, and only further evaluates positive patients through LDCT, the observed sensitivity of the DELFI/LDCT combination method is 90%, and the specificity increases to 80%. In the diagnosis of 100,000 high-risk individuals, the combined method not only significantly increased the detection rate of lung cancer, but also improved the accuracy of detection. These analyses show that using a highly sensitive blood-based early detection test as a pre-screening for LDCT to detect lung cancer has significant population-wide benefits. 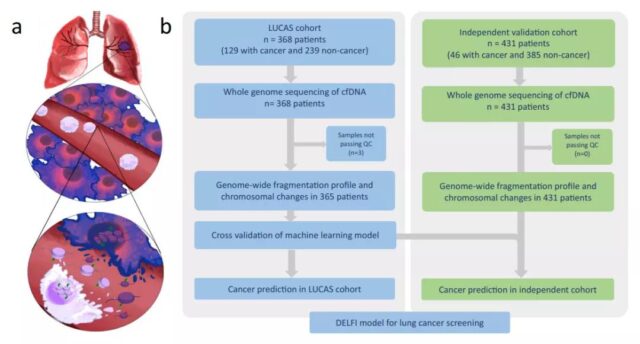 In summary, this work introduces an improved DELFI method for whole-genome fragmentation analysis for the detection of lung cancer. This method can be used to pre-screen high-risk groups of lung cancer to increase the accessibility of lung cancer detection and reduce unnecessary follow-up imaging procedures and invasive biopsy.