Part One: The development history of mRNA vaccines

Overview of the development of mRNA vaccines: Part One.

Part One: The development history of mRNA vaccines

mRNA is an intermediate messenger, which is translated into antigen after being delivered to host cells through various channels. For more than two decades, RNA molecules have been used in disease treatment and research many times, including in vitro transcription (IVT) mRNA, small interfering RNA (siRNA), RNA aptamers, riboswitches, antisense RNA, and mRNA vaccines.

mRNA molecules can be delivered directly to cells, and the idea of ​​manipulating gene expression or producing target proteins was first verified in the late 1980s. Malone et al. first demonstrated that the use of cationic lipid N-[1-(2,3-diethoxy)propyl]-N,N,N-trimethylammonium chloride can efficiently transform NIH3T3 fibroblasts. Stain mRNA.

In the next two decades, the idea of ​​transfecting mRNA molecules into host cells to express the target gene has undergone several technical improvements (Figure 1, Figure 2). 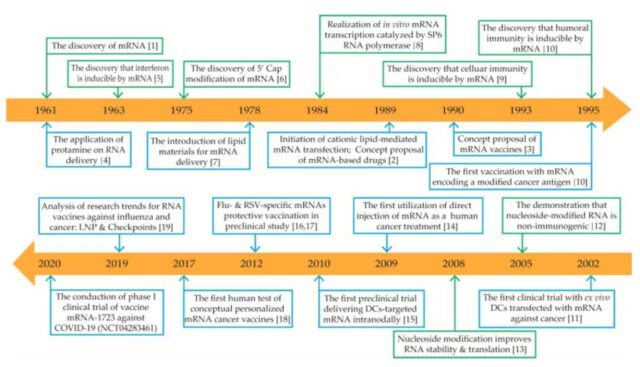 The development of vaccines can generally be divided into two categories: gene-based and protein-based. Protein-based is a traditional method that relies on attenuated or recombinant proteins to be delivered directly as immunogens to activate adaptive and humoral immune responses. Gene-based vaccines are delivered to host cells through DNA or RNA vectors and expressed to produce corresponding antigens and induce host immune responses.

Vaccines based on nucleic acids (including viral vectors, plasmid DNA (pDNA) and mRNA) are suitable for rapid response and application because they can induce a wide range of protective immune responses and may be produced through a fast and flexible manufacturing process. pDNA and viral vectors have been evaluated as vaccine platforms, and their safety and immunogenicity have been proven. However, the entry of pDNA into the nucleus of target cells is quite inefficient, and viral vectors can induce interfering vector-specific immune responses against viral structural proteins, especially when the immune response is enhanced. In the past ten years, people have begun to have more and more interest in mRNA-based vaccines, and more and more research activities have been carried out. 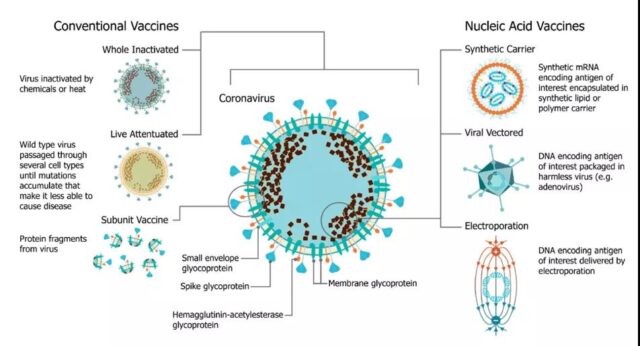 Vaccines derived from the virus itself (left) and nucleic acid vaccines, such as self-amplified RNA vaccines (right). Nucleic acid vaccines are derived from the knowledge of viral genomes, in which glycoproteins are encoded into nucleic acids and delivered through synthetic carriers (such as lipid nanoparticles) or inert virus (such as adenovirus) delivery systems. The sequence encoding the antigen is then expressed by the host cell.

The first advantage of mRNA vaccines is that they are simple and fast to manufacture. The core principle of mRNA vaccines is to provide transcripts encoding target antigens or immunogens. Once the sequence encoding the immunogen is available, RNA synthesis can be performed on the same platform immediately. The process is easy to scale and does not depend on cells, with minimal platform changes during mRNA preparation and manufacturing.

Second, mRNA vaccines express the target protein (antigen) through rapid translation from mRNA after transfection. mRNA vaccines have higher biological safety than DNA-based vaccines, because the translation of antigens occurs in the cytoplasm rather than the nucleus, so compared to DNA-based vaccines, the possibility of mRNA integration into the genome is much smaller. In addition, mRNA is a safer carrier than DNA, because mRNA carries a short sequence to be translated, is a transient molecule, and does not interact with the host genome.

Third, protein-based vaccines are usually produced by bacteria, while mRNA vaccines are translated by the host’s translation machinery. Therefore, it is possible to form an antigen that mimics the protein structure expressed by the viral genome, including post-translational modifications.

However, the storage and transportation of mRNA vaccines require ultra-low temperature, while protein-based vaccines can be stored and transported under less stringent conditions. According to reports, the COVID-19 vaccine can remain stable for 24 hours at room temperature. Therefore, storing and transferring millions of mRNA vaccines in warm countries and regions is a huge technical obstacle and economic burden. However, with the development of lipid nanoparticle technology, the stability of mRNA vaccines can be maintained under less stringent conditions.

Currently, two forms of mRNA vaccines have been developed: traditional mRNA (non-replicating) that encodes the target antigen flanked by 5’and 3’UTR, and self-amplified mRNA (saRNA) derived from the genome of a positive-stranded RNA virus. Self-amplified mRNA not only encodes the antigen, but also encodes the viral replication mechanism required for the amplification of intracellular RNA that leads to high levels of antigen expression (Figure 4). Table 1 summarizes the unique attributes of each mRNA technology and the obstacles that need to be overcome. 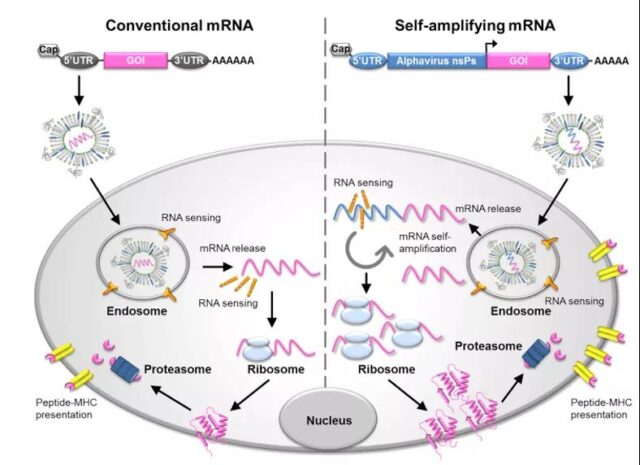 Traditional mRNA carries the coding sequence of the antigen of interest (GOI), flanked by 5’and 3’UTR, terminal 5’cap structure and 3’poly(A) tail. Once in the cell and released from the endosome into the cytoplasm, the mRNA is immediately translated. Self-amplified mRNA is usually derived from the genome of a positive-stranded single-stranded RNA virus (such as alpha virus), which encodes related antigens and viral non-structural proteins (nsPs) required for intracellular RNA amplification and high-level antigen expression. Self-amplified mRNA can guide its self-amplification to produce RNA intermediates and many antigen copies encoding subgenomic mRNAs, thereby producing high levels of encoded antigens. Both traditional mRNA vaccines and self-amplified mRNA vaccines require a delivery system for cellular uptake, usually through endocytosis, and then unload the mRNA from the endosome into the cytoplasm, where the cytoplasm is translated and protein processed for MHC Submit. Once in the cell, mRNA is almost immediately sensed by the pattern recognition receptors (PRR) in the endosome and cytoplasm. PRR such as Toll-like receptors TLR3, TLR7 and TLR8 are located in the endosome, and cytoplasmic sensors such as RIG-I, MDA5, PKR And OAS also recognize double-stranded and single-stranded RNA in the cytoplasm.

Table 1 The advantages and disadvantages of different mRNAs 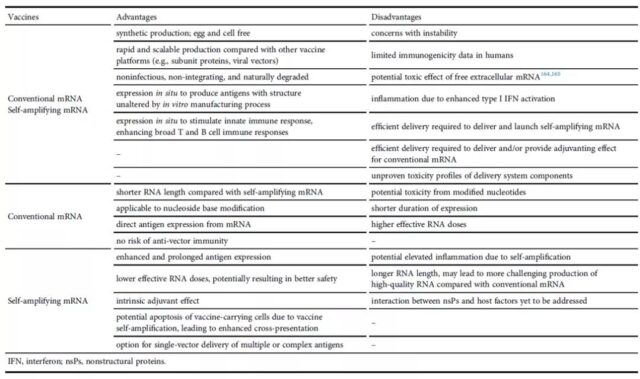 Compared with non-amplified RNA, self-amplified RNA has the advantages of mRNA vaccines, such as rapid development, modular design, and cell-free synthesis. Due to its own replication characteristics, a lower dose of RNA is required, thereby reducing the burden of production of APIs and products, and has potential advantages in responding to pandemics, enabling a large number of people to be vaccinated in a short period of time.

The saRNA vaccine originated from the genome of the A virus. This vaccine contains a gene responsible for viral RNA replication and another transgene that encodes a therapeutic antigen. According to different methods of obtaining antigen expression, self-amplified RNA includes DNA plasmid-based saRNA, virus-like particle delivery saRNA, and in vitro transcribed saRNA (Figure 5). 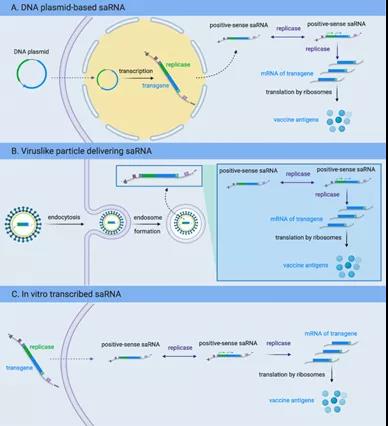 A) DNA plasmid-based saRNA uses plasmid DNA as a vector to transfer the replicase gene and transgene into the nucleus and translate mRNA in the nucleus. B) Virus-like particles encapsulate saRNA and transfer the replicon RNA to the cytoplasm through receptor-mediated endocytosis to form endosomes. C) In vitro transcribed saRNA is delivered in the form of saline or synthetic preparations.