Overview of the development of mRNA vaccines: Part Two.

So far, the in vitro transcription technology of mRNA has been mature, and the most commonly used method is to use T3, T7 or sp6 RNA polymerase and linear DNA (linearized plasmid DNA or synthetic DNA prepared by PCR) for mRNA synthesis.

In eukaryotic cells, some basic structural elements of mature mRNA are necessary to maintain mRNA function, including 5’cap (5′ cap), 5’untranslated region (5′ UTR), and open reading frame (ORF) region , 3’untranslated region (3′ UTR) and poly(A) tail structure, keeping the mRNA structure intact is beneficial to mRNA stability and expression ability. Modification of the mRNA sequence based on its complete structure can further optimize the efficiency of the mRNA vaccine (Figure 1).

The mRNA molecule is synthesized in vitro and has a cap structure (m7GpppNm). Uridine is replaced by pseudouridine. Humans use preferred codons to optimize UTR and polyA tail sequences. These modifications improve RNA stability and translation efficiency and reduce immunogenicity. 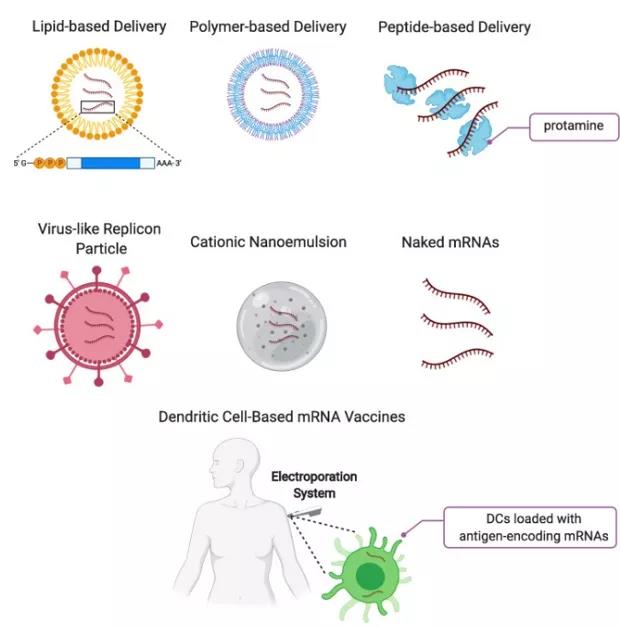 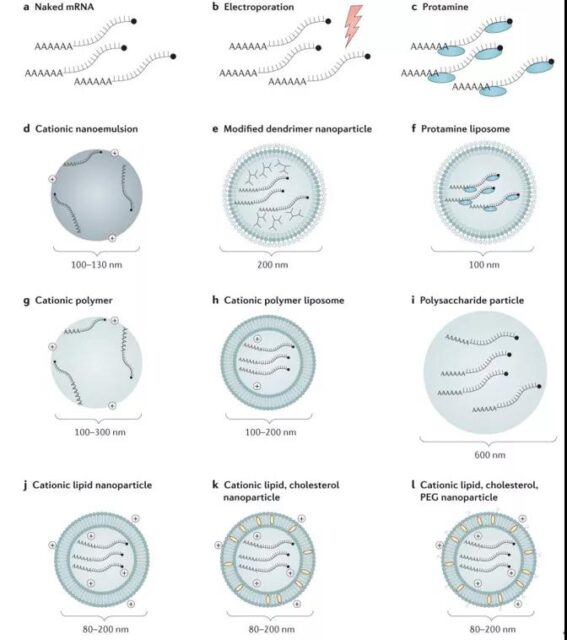 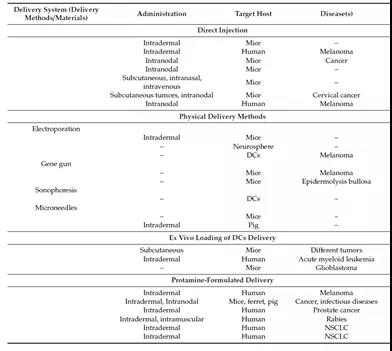 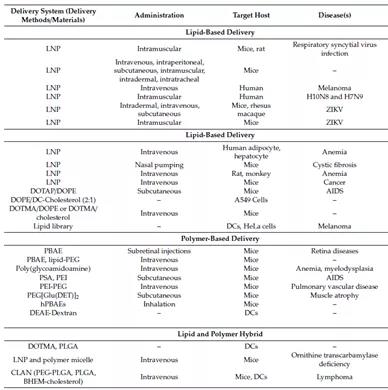 LNP is the most widely used platform and has been proven to have the best clinical effects in mRNA delivery. LNP is mainly composed of ionizable lipids, cholesterol, phospholipids, and polyethylene glycol (PEG)-lipids (Figure 4).

LNP was originally designed to deliver siRNA, and is now used in the delivery of mRNA, and has emerged as the most clinically translatable non-viral delivery vector. LNP is mainly composed of ionizable amino lipid molecules, auxiliary phospholipids, cholesterol, and lipid-anchored polyethylene glycol (PEG). Ionizable lipid is an amphiphilic structure with a hydrophilic head group (containing one or more ionizable amines), a hydrocarbon chain that can promote self-assembly, and a linker between the head group and the hydrocarbon chain. Ionizable lipids are designed to obtain positive charges by protonation of free amines at low pH values. They are mainly used for two purposes: (1) During the preparation of LNP, positively charged lipids can promote negative charges through electrostatic interactions. Encapsulation of charged mRNA; (2) In the acidic endosomal microenvironment after LNP is transported in the cell, positively charged lipids can interact with the ionic endosome membrane to promote membrane fusion and destabilization, leading to LNP and endosome Release mRNA.

At physiological pH, ionizable lipids remain neutral, improving stability and reducing systemic toxicity. Representative ionizable lipids include: Dlin-DMA, Dlin-KC2-DMA and Dlin-MC3-DMA, which are synthesized on the basis of rational design; C12-200 and cKK-E12 are based on the high level of combinatorial library Flux screening; the next generation of COVID-19 lipids, including DLN-MC3-DMA derivatives L319, C12-200 and CKK-E12 derivatives, COVID-19 vaccine lipids ALC-0315 and SM-102, TT3 and bioavailable Degradable derivatives FTT5, vitamin-derived lipids SSPALME and VCLNP, A9, L5, A18 lipids, ATX lipids and LP01, most of them are biodegradable (Figure 5). In addition to ionizable lipids, the addition of phospholipids (DOPE and DSPC) and cholesterol can improve the stability of the lipid bilayer, assist membrane fusion and endosomal escape. Lipid-anchored PEG can reduce macrophage-mediated clearance. More importantly, lipid-anchored PEG helps prevent particle aggregation and improve storage stability. 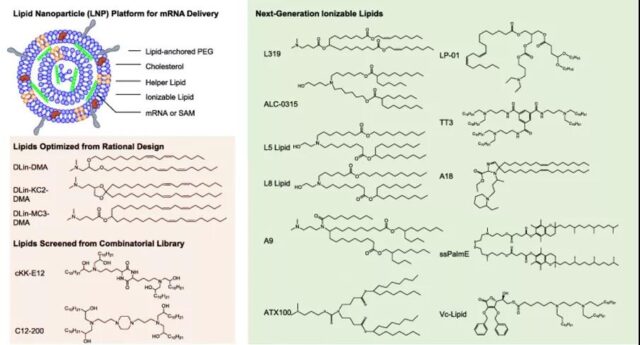 Once the pathogen is identified or an outbreak is declared, the genome of the pathogen and antigen will be determined through combined sequencing, bioinformatics, and calculation methods (if not yet available). Candidate vaccine antigen sequences are stored electronically and can be used for computer design of mRNA vaccines worldwide, and then plasmid DNA templates can be constructed through molecular cloning or synthesis. The pilot vaccine batch is produced in a cell-free system through in vitro transcription and capping of mRNA, purification and formulation using a delivery system. Perform in-process analysis and efficacy testing to evaluate the quality of experimental mRNA vaccine batches. If necessary, experimental mRNA vaccine batches can be further tested in immunogenic and/or disease animal models. The final mRNA vaccine is amplified and manufactured through a common process, requires few modifications, and can be quickly tested and dispatched for use (Figure 6). 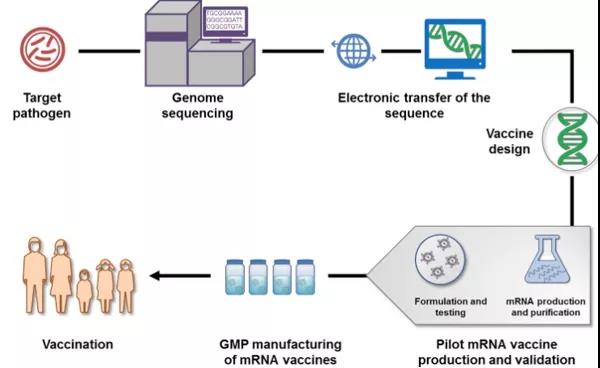 Compared with traditional vaccines, one of the most important advantages of mRNA is its relatively simple manufacturing. In order to produce mRNA products with specific quality attributes, a series of manufacturing steps must be performed. At present, there is still a lack of a complete manufacturing platform that allows a combination of multiple steps. These can be divided into upstream processing (including enzymatic production of mRNA) and downstream processing (including the unit operations required to purify mRNA products) (Figure 7). 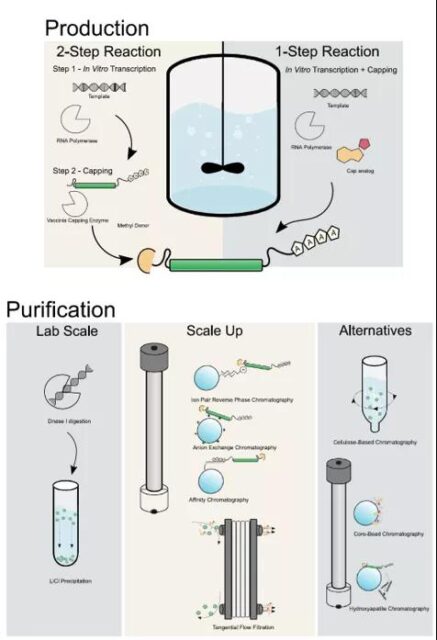 mRNA production can be carried out in a one-step enzymatic reaction, in which a capping analog is used, or in a two-step reaction, in which a vaccinia capping enzyme is used for capping. The laboratory-scale mRNA purification process includes DNase I digestion followed by LiCl precipitation. Using mature chromatographic strategies, combined with tangential flow filtration, a larger-scale purification can be obtained; new chromatographic methods can also be used to supplement standard purification.

The current IVT mRNA production methods must be improved to commercialize mRNA technology and support market demand. Since the process output and production scale have an impact on the manufacturing cost and the cost of each agent, it is speculated that continuous processing will have the special advantage of reducing costs. Continuous processing is already used in the chemical and pharmaceutical industries to run flexible and cost-effective processes and ultimately provide on-demand production. In addition, process integration through continuous manufacturing can also shorten operating time, promote automation and process analysis technology (PAT), thereby increasing productivity and product quality. The relative simplicity of mRNA manufacturing makes this process very suitable for continuous processing, especially at the microfluidic scale (Figure 8).

The process consists of a continuous two-step enzymatic reaction, followed by a tangential flow filtration strategy and two multi-mode chromatography steps for enzymatic cycling, one for intermediate purification in bind-elution mode, and the other for purification in flow mode , And use the third tangential flow filter module to realize the recipe.