Overview of the development of mRNA vaccines: Part Three.

The location of the vaccination affects the induced immune response

In addition to the vaccine component itself, the method and location of delivery also affect its effectiveness (Figure 1). Vaccines are usually injected into muscle or subcutaneous fat tissue. Other non-traditional methods, such as transnasal, intrasplenic, intradermal, intranasal, intravenous, and tumors, are also widely used. The secondary lymphoid organs are characterized by the dense presence of a large number of immune cells, such as APC and T cells, which create an ideal place for effectively inducing adaptive immune responses. Dendritic cells are a highly specialized and heterogeneous subgroup of APCs, which link the innateness of pathogens with the activation of adaptive immunity. 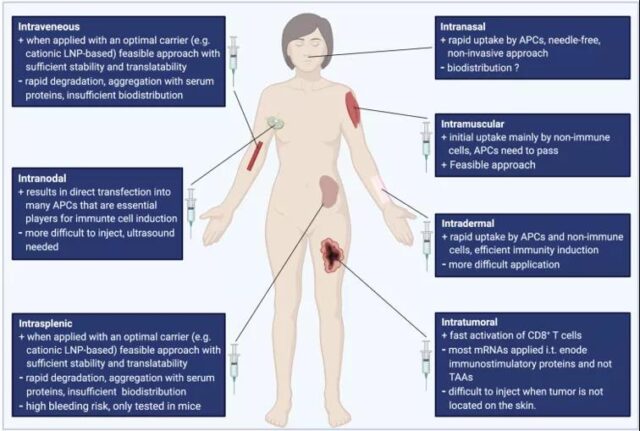 The figure lists the advantages and disadvantages of the different methods. In general, direct transfection of APC with mRNA is not a necessary prerequisite to effectively induce an immune response. In principle, systemic injection is feasible. Direct injection of mRNA into secondary lymphoid tissues facilitates targeted antigen delivery to APC without DC migration. Intramuscular and intradermal injections of the vaccine can trigger longer-lasting protein expression. In addition, in one study, compared with intravenous injection, the half-life of luciferase encoded by intradermal mRNA was increased three times.

Once the mRNA molecule is released from LNP into the cytoplasm, it is sensed by toll-like receptors (TLR) such as TLR3 or 7/8 and retinoic acid-inducible gene (RIG)-I, which is promoted by retinoic acid-inducible gene (RIG)-I Type I interferon (IFN) is secreted into the extracellular matrix, creating an environment conducive to Th1 response rather than Th2 response. mRNA is directly translated into polypeptides by the ribosome, processed by the proteasome system, resulting in the presentation of peptides to MHC-I on the cell surface (similar to during viral infection), and post-translational modification to fold into proteins. According to the mRNA design, it can be a membrane Anchored or secreted. After the extracellular protein or cell debris containing the protein ingests the protein, peptide presentation on MHC-II may appear on the APC (Figure 2). 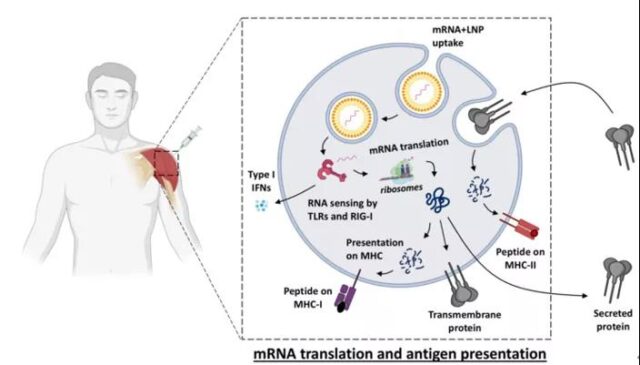 Figure 3 The effect of mRNA vaccine on immune function

a) The influence of exogenous mRNA on innate immunity. TLR in the endosome and receptors such as RIG-I and MDA5 in the cytoplasm can detect exogenous mRNA. dsRNA can induce a strong IFN1 response. Peptides derived from translated proteins will be processed in the proteasome and displayed on MHC-I and MHC-II molecules. b) The influence of exogenous mRNA on adaptive immunity. APC can present the foreign antigen on MHC-II to CD4+ T cells, and cross-present it on MHC-I to CD8+ T cells. CD4+ T cells provide help for B cells and CD8+ T cells. Finally, the clonal expansion of antigen-specific B and T cells leads to the elimination of target cells. c) The risk of tumor immune evasion. Tumors can create an immunosuppressive microenvironment by recruiting bone marrow-derived suppressor cells (MDSC), regulatory T cells, M2 macrophages and producing immunosuppressive cytokines. For example, the up-regulation of depletion markers on T cells or the loss of antigens on tumor cells can further promote immune evasion. CPI (Immune Checkpoint Inhibitor) may help regain immune surveillance. 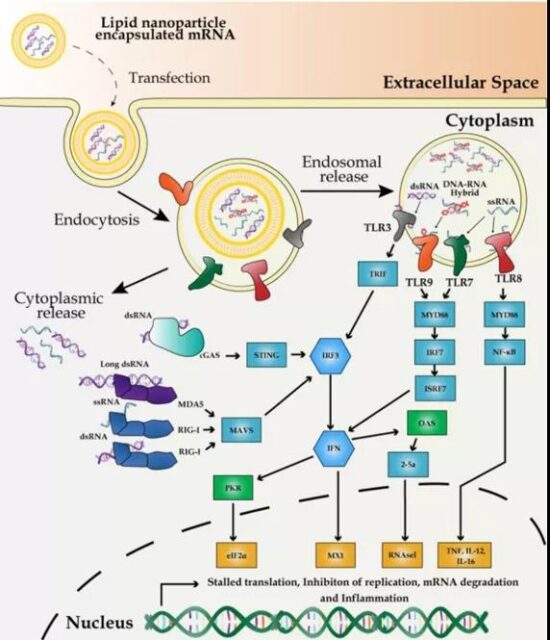 The mRNA vaccine synthesized by IVT is recognized by PRR (including endosomal TLR3, -7 and -8, and cytoplasmic innate immune receptors RIG-I and MDA5). The dsRNA produced by the inaccurate T7 polymerase activity is recognized by TLR8 and RIG-I to induce the expression of pro-inflammatory cytokines and promote the expression of 2′-5′-oligoadenylate synthase/RNase L and PKR-dependent eIF2α phosphorylation mediated RNA degradation and translational inhibition. 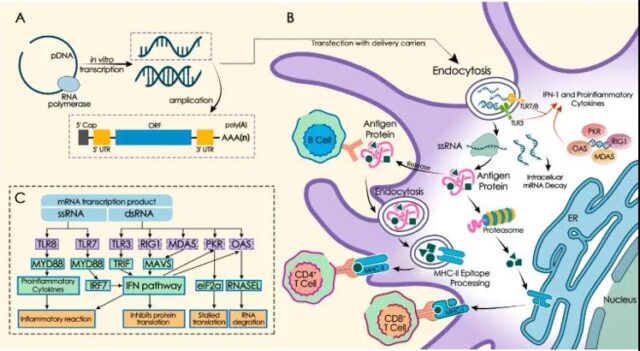 (B) RNA translation and antigen presentation. mRNA enters the cytoplasm through endocytosis. Some mRNAs bind to the ribosomes of the host cell and are successfully translated. Antigenic proteins can be degraded into antigen peptides by the proteasome in the cytoplasm, and presented to cytotoxic T lymphocytes (CTL) through the major histocompatibility complex (MHC) I pathway; alternatively, they can be released from host cells, And received by DCs. Then, they are degraded and presented to helper T cells and B cells through the MHC-II pathway. B cells can also recognize the released antigen protein 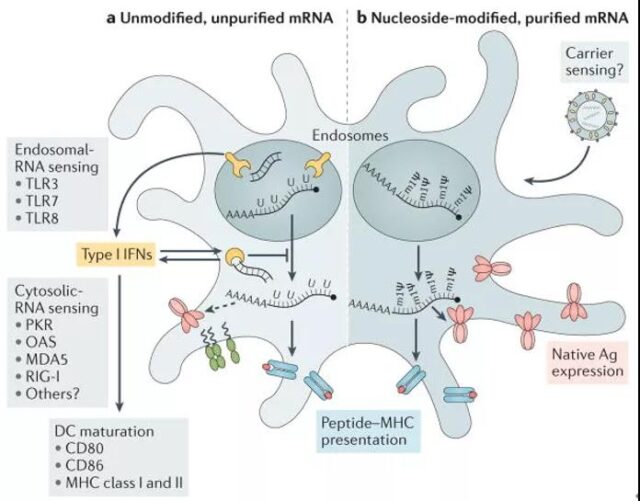 Local inflammation at the injection site promotes the infiltration of immune cells, including neutrophils, monocytes, myeloid dendritic cells (MDC) and plasmacytoid dendritic cells (PDC). Neutrophils can take up LNP efficiently, but monocytes and MDCs translate mRNA more efficiently. Type I interferon (IFN) is stimulated to secrete. The mRNA/LNP and protein antigens will diffuse, and the cells will migrate to the vaccine-draining lymph nodes. The presentation of antigen to T cells and the interaction of antigen with B cells occur at these sites. This causes the formation of a germinal center, which produces memory B cells that reside in the bone marrow and plasma cells that produce antibodies.