The overall cancer mortality rate in the United States has declined, but the incidence of various cancers is on the rise; the smoking rate cannot drop, and the HPV vaccination rate cannot rise, or it may lay the blame for the future. Just take a look at the US data. You bear the risk of cancer yourself. Don’t step on these pits!

Summary of this article

The Centers for Disease Control and Prevention (CDC), the American Cancer Society (ACS), the National Cancer Institute (NCI), and the North American Central Cancer Registry (NAACCR) each year cooperate to release the latest information on the occurrence and death of cancer in the United States and for future developments. Trends make predictions.

Recently, this annual cancer report was published in the “Cancer” magazine. The report consists of two parts: the first part focuses on the national cancer statistics of the United States; the second part focuses on the prevention, screening and treatment of four major cancers, lung and bronchial lung cancer, colorectal cancer, breast cancer and prostate cancer in women Situation. At the same time, the magazine also published relevant reviews.

The overall cancer mortality rate continues to decline. Is the situation looking good?

The U.S. National Cancer Report collected data from newly diagnosed cancers from 2001 to 2016, and assessed the incidence of major cancers in 2012-2016 and mortality in 2013-2017. The first part of the report mainly disclosed the incidence and mortality of lung and bronchial lung cancer, colorectal cancer, female breast cancer, prostate cancer, pancreatic cancer, liver and intrahepatic cholangiocarcinoma, leukemia, non-Hodgkin’s lymphoma and other cancers. 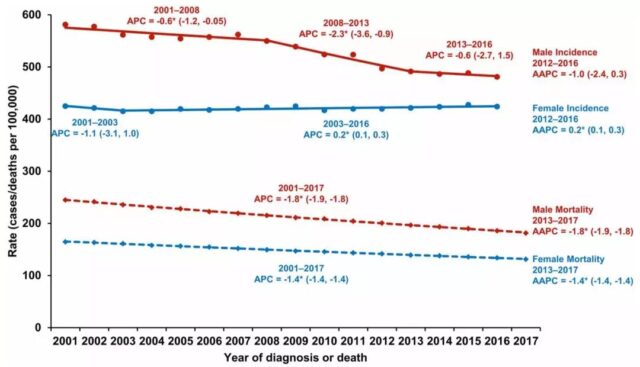 The incidence of cancer has been stable among non-Hispanic white men, but has declined among men of other ethnicities. Among the 17 major cancers in men, the incidence of 5 cancers decreased in men, including lung and bronchial lung cancer and colorectal cancer. Among them, lung cancer decreased the most, reaching 2.6%; the incidence of 7 cancers remained stable, including prostate cancer. ; The incidence of the remaining 5 cancers has increased, namely liver and intrahepatic cholangiocarcinoma (+2.5%), skin melanoma (+2.2%), kidney and renal pelvis cancer (+1.5%), oral and throat cancers (+1.2%) and pancreatic cancer (+1.1%).

Among women, the incidence of cancer has increased in all ethnic groups, with an average annual increase of 0.2%. Among the 18 major cancers, the incidence of 4 cancers has decreased. The most significant decrease is ovarian cancer (-1.6%), and the incidence of lung cancer also ranks among the top (-1.1%); 6 types remain stable. Including colorectal cancer; 8 types have increased, of which the largest increase is liver and intrahepatic cholangiocarcinoma (+3.7%), others also include skin melanoma (+1.9%), uterine cancer (+1.3%), and myeloma (+1.2%) and pancreatic cancer (+1.0%). Breast cancer is also among them (+0.5%).

Cancer death rates for all races and all genders have declined. For men, the decline can reach 1.8%, and 11 of the 19 major cancers have declined, including lung and bronchial lung cancer and colorectal cancer, skin melanoma can have a decline of 6.1%, and lung cancer can have a decline of 4.8%. However, the mortality rate of oral and throat cancer, soft tissue tumors, brain and other nervous system tumors, and pancreatic cancer has increased, ranging from 0.3% to 1.0%.

The cancer mortality rate for women has decreased by 1.4% per year, and 14 of the 20 major cancers have decreased, including lung and bronchial lung cancer, colorectal cancer and breast cancer, skin melanoma can be reduced by 6.3%, lung and bronchial lung cancer The drop can reach 3.7%. However, the mortality rate of five other cancers in women has increased, including uterine cancer, liver and intrahepatic cholangiocarcinoma, brain and other nervous system tumors, soft tissue tumors, and pancreatic cancer, with increases ranging from 0.2% to 2.1%. 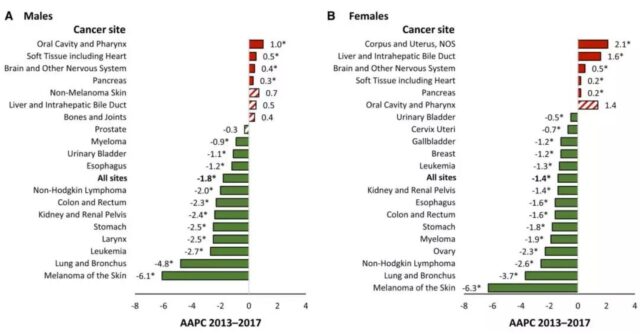 The authors of the report pointed out that the overall mortality rate of cancer has declined, the incidence of men has remained stable, while the incidence of women has increased. This statistics is not a goal in itself, but by analyzing the trend of changes in the statistics, it is possible to discover cancer risk factors, screening, diagnosis, and treatment progress. If useful information can be found from the data, it will be beneficial to the prevention and treatment of cancer and reduce people’s cancer burden. Therefore, there is also the second part of the report, for us to interpret the four major cancers behind the data.