Nature: Cholesterol may cause treatments of Breast cancer cells failed

Nature: Cholesterol may cause treatments of Breast cancer cells failed.

Hypercholesterolemia is an independent risk factor for breast cancer in postmenopausal women. Taking statins (the most commonly used drugs to lower low-density lipoprotein cholesterol) is beneficial to breast cancer patients. However, the effect of cholesterol on the mechanism of breast cancer is not yet fully understood.

Cholesterol is a basic component of cell membranes. To proliferate, cells need to synthesize or accumulate more cholesterol. It has been determined that 27-hydroxycholesterol (27HC), an abundant circulating cholesterol metabolite, functions as a SERM (selective estrogen receptor modulator). Therefore, the effectiveness of statins in patients with ER (estrogen receptor) positive breast cancer may be attributed to the reduction of 27HC production. But there is a paradox for ER-negative breast cancer. These cancers do not depend on estrogen, but high cholesterol is still associated with their poor prognosis, which suggests that different mechanisms may be at work.

The study showed that long-term exposure to the cholesterol metabolite 27-hydroxycholesterol (27HC) allows those cells that exhibit increased cellular uptake and/or lipid biosynthesis to survive. These cells highly express the negative regulator of iron death, GPX4, showing The stronger metastatic ability makes them impeccable when migrating from the original tumor site. The study determined the mechanism by which breast cancer cells use cholesterol to resist death, which is expected to be a target for cancer treatment.

The research team first evaluated the effect of 27HC on the activity of ER-positive breast cancer cells (MCF7) cells in the exogenous steroid-removed medium (CFS) and complete medium (FBS). They observed that in CFS, 27HC promoted cell proliferation and colony formation; in FBS, 27HC played an inhibitory role. However, 27HC completely inhibited the proliferation, migration and colony formation of ER-negative cell lines. Further experiments showed that the main role of 27HC in ER-negative cells is to inhibit cholesterol synthesis/uptake.

Hypercholesterolemia is a chronic disease. The research team constructed a chronic 27HC-stimulated resistant cell line. In the absence of 27HC, the overall proliferation capacity of sensitive cells and resistant cells is similar. However, when transplanted into mice, resistant cell lines are more tumorigenic than sensitive cells. In these in vivo studies, tumors proliferated in mice without exogenous 27HC, which suggests that the observed increase in tumorigenicity is not the result of the direct effects of 27HC, but because the cells are resistant to the antiproliferative effects of 27HC. sex. 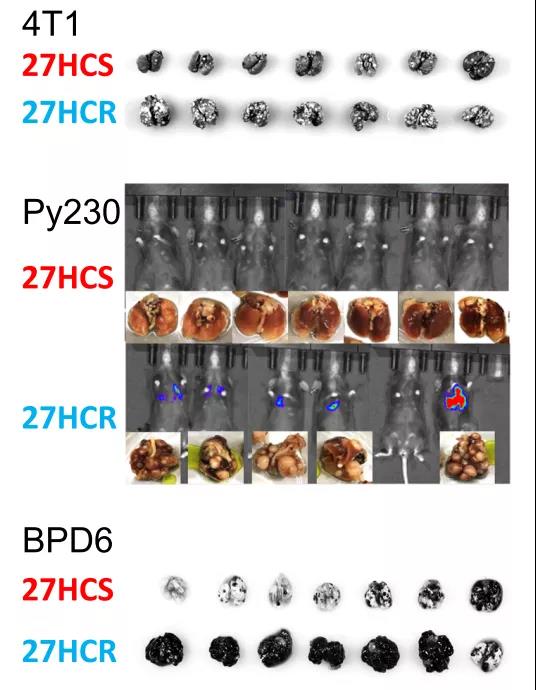 Next, the research team evaluated the potential biochemical mechanisms of resistance to 27HC and how they promote the malignant transformation of cancer cells. The results showed that under basic conditions, the mRNA encoding the key regulatory step in the process of cholesterol/lipid synthesis was almost unchanged. In sensitive and resistant cells, 27HC is still an effective inhibitor of their expression. However, all 27HC-resistant cells tested accumulated a large amount of neutral lipids, which were stored in the form of cytoplasmic lipid droplets (LD), indicating that in order to offset the inhibitory effect of 27HC on cholesterol and lipid synthesis, 27HC-resistant cells May increase their ability to take in neutral lipids. These results indicate that increased lipid uptake and, to a lesser extent, lipid biosynthesis are characteristics of the resistance of cells to the antiproliferative effects of 27HC. 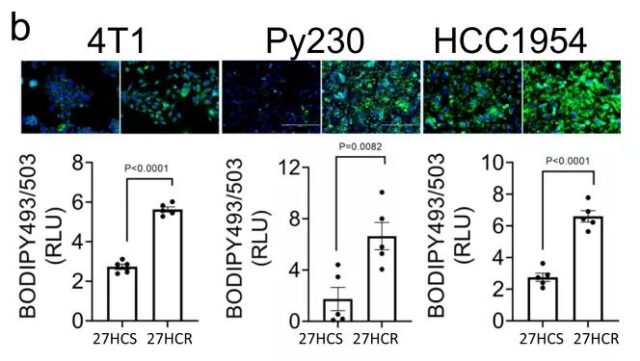 The accumulation of lipids in 27HC-resistant cells is also expected to put considerable metabolic pressure on the cells. Recently, it has been shown that cells can tolerate lipid-dependent stress by participating in the GPX4 (phospholipid glutathione peroxidase 4)-dependent antioxidant pathway and/or down-regulating the expression of enzymes responsible for lipid oxidation. Therefore, the research team believes that 27HC-resistant cancer cells may increase the threshold for inducing iron death. The results showed that the disruption of the regulatory mechanism that led to the down-regulation of GPX stabilized the expression level of GPX4. This activity, along with reducing the pressure on the GPX4 pathway, by regulating the expression of genes related to lipid peroxidation. Importantly, these studies show that resistance to iron death is a characteristic of metastatic cells and prove that knocking down GPX4 weakens the otherwise enhanced tumorigenic and metastatic activity of cells exposed to 27HC for a long time.

In summary, this work emphasizes the universal importance of iron death in tumor growth and metastasis, and shows that dyslipidemia/hypercholesterolemia affects the pathogenesis of cancer by selecting cells that are resistant to iron death.