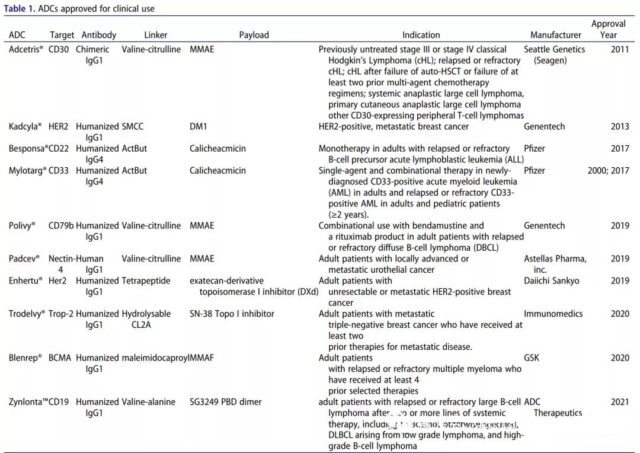 The tumor cell surface down-regulates the expression of the target antigen, so that the ADC cannot exert its cytotoxic effect. For example, tumors that are resistant to T-DM1 have decreased HER2 expression. Patients treated with brentuximab vedotin/Adcetris treatment of anaplastic large cell lymphoma (ALCL) had CD30 down-regulation (Reference 1). Bi-epitope ADCs were developed to overcome such resistance, such as ZW49 (Zymeworks, biparatopic anti-HER2 ADC), in phase 1 clinical HER2-positive tumors (NCT03821233). M1231 (EMD Serono, a bispecific anti-EGFR/MUC1 ADC) ) Phase 1 clinical trial of solid tumors (NCT04695847).

Paradoxically, high antigen expression may also reduce the effectiveness of ADCs, which may be due to reduced drug exposure. With Gemtuzumab ozogamicin/Mylotarg, high CD33 antigen load in peripheral blood is a poor prognostic factor. The high CD33 load in the blood consumes Gemtuzumab ozogamicin, thereby limiting its penetration in the bone marrow.

The extracellular domain of HER2 antigen is truncated or the extracellular matrix component masks it, which has occurred in trastuzumab monoclonal antibody therapy, and there has been no report of ADC drugs.

Finally, the presence of antigen ligands can adjust the sensitivity to ADCs. Some studies have shown that neuregulin promotes the heterodimerization of HER2, HER3 and HER4, impairing the efficacy of T-DM1.

The best effect of ADC requires the endocytosis of the antibody into the cell. Endocytosis can be through different ways, such as clathrin-mediated (CME), caveolin (CAV1) -mediated, clathrin-caveolin-independent endocytosis.

In a group of HER2+ cell lines, the co-localization of T-DM1 and CAV1 is associated with decreased response to drugs, suggesting that CAV1-mediated endocytosis of T-DM1 may predict the response. In those cells that accumulate ADC in CAV1 vesicles, lysosomal co-localization was significantly reduced, indicating that the delivery of T-DM1 to lysosomes is inefficient. In cell lines that are sensitive to antimelanotransferrin ADC (L49-valine-citrulline-MMAF), ADC and lysosomes co-localize, while in drug-resistant cell lines, ADC co-localizes with CAV1.

ADCs need to reach the lysosome, where cytotoxic drugs are released by chemical or enzymatic cleavage. In cells exposed to T-DM1 resistance for a long time, T-DM1 was observed to accumulate in lysosomes.

In these cells, the drug reaches the lysosomal chamber, but its proteolytic activity is lower than that of sensitive cells. This defect is due to an increase in lysosomal pH, which in turn inhibits lysosomal proteolytic enzymes. In theory, all ADCs that require degradation by lysosomal acid proteases may be exposed to this resistance mechanism.

Lysosomal storage disease characterized by the accumulation of undigested molecules in lysosomes supports the possibility that lysosomal dysfunction may affect ADC catabolism in patients. ADCs with valine-citrulline linkers have multiple ways to produce active catabolites, and cathepsinB is indispensable for its processing.

A common mechanism of chemotherapy resistance is the elimination of the drug from the cytoplasm through the ATP-binding (ABC) transporter. These drug efflux pumps may also contribute to resistance to ADCs, because many cytotoxic drugs are substrates of ABC transporters.

Clinical data shows that the activity of MDR1 is significantly related to the poor prognosis of patients. It has been observed that compared with non-responders, the MDR1 activity of AML blasts of responders to Gemtuzumab ozogamicin, as assessed by the efflux of the PgP fluorescent substrate, is significantly lower. Inotuzumab ozogamicin (IO) also got similar results.

ADCs based on auristatin analogs, such as brentuximab vedotin, can also select MDR1-expressing cell populations after chronic treatment, which is observed in HL cell lines and relapsed or drug-resistant patient samples. MDR1 is the main driver of drug resistance in valine-citrulline-MMAE ADC.

The recently proposed T-DM1 resistance mechanism is related to the effect of drugs on cyclinB, which is a cyclin involved in the transition of G2-M.

In HER2+ breast cancer cells sensitive to T-DM1, the drug caused an increase in cyclinB, while in cells resistant to T-DM1, this increase was not observed. In the cohort of 18 HER2+ breast cancers, the anti-tumor effect of T-DM1 paralleled the accumulation of cyclinB. Therefore, the induction of cyclinB can be used as a biomarker of T-DM1 sensitivity.

The activated PI3K/AKT signal is related to the in vitro Gemtuzumab ozogamicin resistance of primary AML cells. The AKT inhibitor MK-2206 significantly increased the sensitivity of resistant cells to Gemtuzumab ozogamicin. There is currently a clinical study exploring the safety of the combined use of T-DM1 and PI3K inhibitor BYL719 (NCT02038010).

Changes in the regulation of apoptosis may also regulate the sensitivity to ADCs. Pro-apoptotic proteins BAX and BAK regulate Gemtuzumab ozogamicin sensitivity in AML.

In addition, the overexpression of anti-apoptotic proteins BCL-2 and BCL-X is related to Gemtuzumab ozogamicin resistance. BCL-2 antisense therapy (Genasense® (G3139, oblimersen sodium)) has been combined with Gemtuzumab ozogamici to treat elderly AML.

In the NHL cell line, the expression level of BCL-XL was found to be associated with decreased sensitivity to CD79b-valine-citrulline-MMAE. In vivo data show that the BCL-2 family inhibitor ABT-263 enhances the activity of ADC.

Cancer Research has a picture that summarizes these mechanisms very well. Of course, there are some mechanisms that may not be sorted out in the article. Learning is endless…. 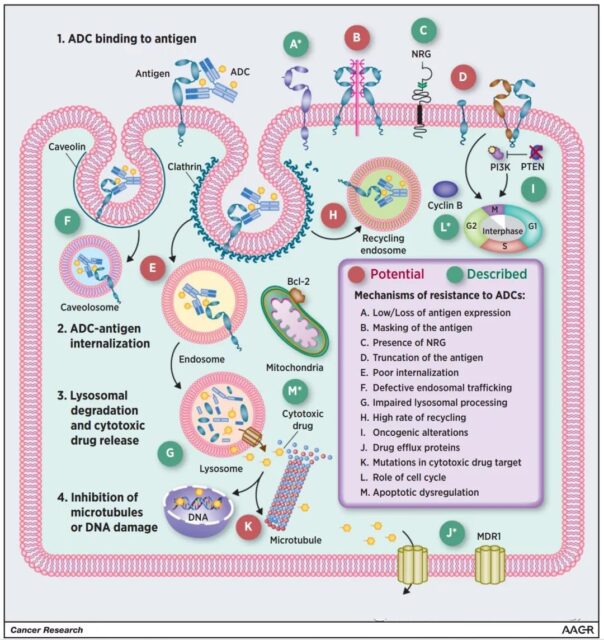