Cancer cell: Intestinal microbes may affect the effect of radiotherapy on cancer

Many studies have shown that the bacterial community in the intestine may interfere with the progress of human cancer by affecting the growth and spread of tumors and the tumor’s response to chemotherapy or immunotherapy. But new research shows that bacteria are not the only microorganisms in the intestine that affect tumor progression and response to treatment. Studies have found that fungi may also play an important role.

Immunotherapy has revolutionized the treatment of several advanced cancers, including melanoma and lung cancer. But the details of how the immune system helps fight cancer remain to be discovered. Recent studies have shown that the immune system can also affect the effects of chemotherapy and radiotherapy. After radiotherapy, immune cells infiltrate the tumor, making it an unsuitable environment for tumor cells to re-grow. Without the contribution of immune cells, cancer cells are likely to re-grow immediately after treatment.

Why sometimes (in tumors after radiation therapy) a strong immune response occurs, but other times not? The results showed that microbes (called the gut microbiome) found in the human gut affect the way immune cells work throughout the body.

Scientists at the Cedars-Sinai Medical Center found in a study of mice that when the normal bacterial community in the intestine is destroyed, fungi enter, and these fungi in turn destroy the immune response to tumors.

The research team used mice to verify whether adjusting the composition of the gut microbiome can improve the effectiveness of certain cancer treatments. In the group of mice treated with radiotherapy combined with antibiotics, the intestinal bacteria that were destroyed by antibiotics were replaced by fungi, and the mice died quickly. Furthermore, studies have found that even if the bacteria are not removed in advance, injecting large amounts of fungi into the intestines will reduce the effectiveness of radiation therapy. 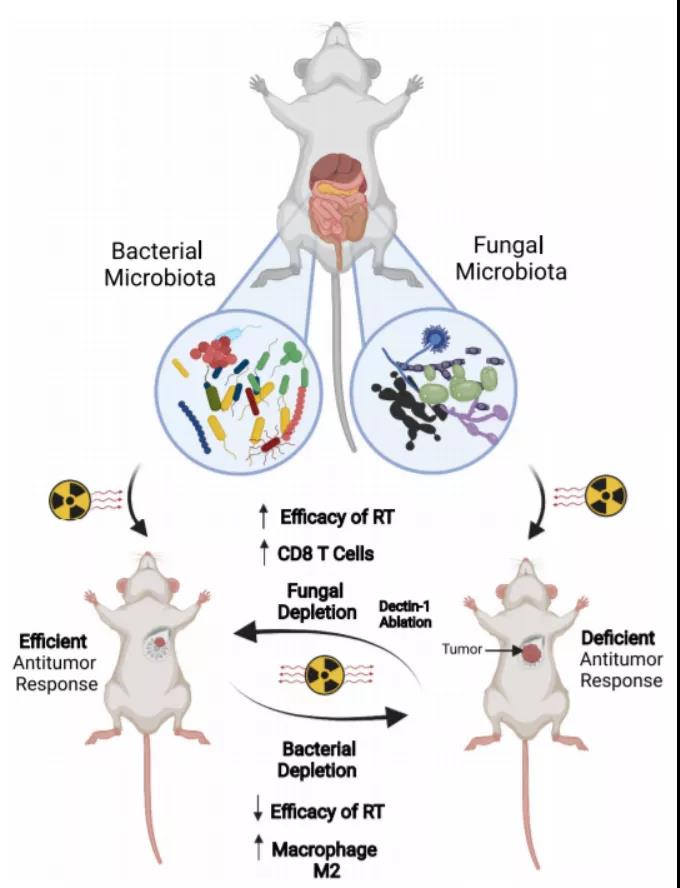 The researchers also found a fungal sensory protein Dectin-1 in tumors, which may play a role in this phenomenon. They used samples from human tumors and found that breast cancer or melanoma patients with higher protein levels did not live longer than those with lower protein levels.

The study revealed the counteracting effects of bacteria and fungi in the anti-tumor immune response of radiotherapy. Although inhibiting bacteria can cause damage, inhibiting fungal growth can increase the effectiveness of radiotherapy. The Dectin-1 protein is connected between innate immunity and adaptive immunity.