Medical gas plasma stimulates wound healing: What are the Evidence and Mechanism.

The deficiencies in wound healing place a huge burden on the patient and the medical system. In recent years, a treatment method for chronic wounds based on reactive oxygen species and nitrogen (ROS/RNS) has received extensive attention from dermatologists.

Multi-faceted ROS/RNS is produced by gas plasma technology, which is a partially ionized gas that operates at body temperature.

This review integrates preclinical and clinical evidence into a set of working hypotheses based primarily on redox processes to help clarify the mechanism of action and optimize gas plasma for therapeutic purposes.

These hypotheses include increased oxidation and vascularization of wound tissue, increased apoptosis of senescent cells , increased redox signaling and microbial inactivation. Instead of the leading role of a single effector, all the mechanisms act synergistically in the healing of gas plasma stimulation, rationalizing the use of this technology in the treatment of trauma.

Finally, the current challenges and future concepts are proposed to further promote the clinical application, effectiveness and safety of gas plasma technology in wound care.

In the era without antibiotics , even seemingly minor tissue damage combined with persistent infections determined life and death. Therefore, wound management has a long tradition in the world and culture. With the discovery of antibiotics , deaths related to wounds and infections have declined.

Today, most traumas are not the result of wars and battles, but are related to aging and underlying diseases ( such as diabetes , vascular disease, pressure ulcers during long hospital stays ) . However, there are many treatment methods for defect wound healing, and the level of evidence for many methods is relatively low.

Further complicating wound treatment is the wide variety in the types and order of treatment. Therefore, research on wound healing and management is still active, and new concepts and methods continue to emerge.

In the next few years, the concept of redox signaling in wound healing, and the need for oxygen and oxygen-derived reactive species that are an essential part of several wound healing-related processes were elaborated in more detail. Another conclusion of these studies is that the controllable generation and release of ROS and reactive nitrogen (RNS) may promote wound healing.

For this reason, it is conceivable that ozone trauma therapy is a concept that has existed for decades, although it has not yet entered extensive clinical practice. Other wound healing products, such as neomycin / catalase (Pulvo 47) , dimethyl sulfoxide (DMSO) and iron chelator, are also intertwined with the production or removal of ROS .

At about the same time, a new technical concept emerged that can simultaneously generate a large amount of ROS/RNS in a local and time-limited manner and operate at body temperature: a medical gas plasma generation system used to support wound healing. Since then, great progress has been made. This work reviews the evidence and mechanisms that gas plasma stimulates wound healing. It focuses on injured skin rather than other areas where plasma technology is envisaged to improve healing. , Such as tumor wounds in implantology, dentistry and oncology . 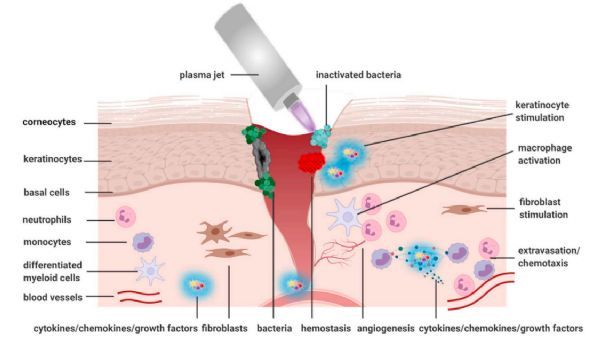 Gas plasma systems have long been believed to have profound antibacterial activity, which suggests that they are suitable for combating defective wound healing in symptomatic rather than causal treatment. Today, convincing preclinical and evolving clinical evidence emphasizes the good healing response of gas plasma-stimulated wounds. However, due to the different systems and applications used and the data situation, it is currently difficult to make specific clinical recommendations.

In general, the evidence-based findings are promising, but they are still not enough to extract gas plasma to treat all types of wounds and causes. However, from a scientific point of view, it is worth noting that some recent reports indicate that the effect of gas plasma-derived ROS/RNS in promoting wound healing has nothing to do with the effect of antibacterial plasma. Although the ROS/RNS mixture of gaseous plasmas is complex, it is currently difficult to extract a single mode of action, but these encouraging findings may form the basis of an exciting medicine to regulate the redox paradigm through gaseous ROS/RNS . (