What are the drugs of targeted therapy for T cell lymphoma?

What are the drugs of targeted therapy for T cell lymphoma?

However, T-cell lymphoma has a poor prognosis, poor sensitivity to chemotherapy, and a low overall patient survival rate.

This article reviews the targeted therapy drugs for T-cell lymphoma.

CTCL is the most common type of skin lymphoma, usually clinically presented as red, scaly plaques or thickened skin plaques, similar to eczema or chronic dermatitis.

Among the subtypes of CTCL, Mycosis fungoides (MF) is the most common subtype of CTCL.

As for the treatment of CTCL, it is mainly divided into system treatment and local treatment. However, T-cell lymphoma has a poor prognosis, poor sensitivity to chemotherapy, and a low overall patient survival rate.

Since the US FDA approved Rituximab (Rituximab) for relapsed or refractory B-cell lymphoma in 1997, the development and approval of new targeted therapies for B-cell lymphoma has surged.

As for T-cell lymphoma, a considerable amount of basic research and translational research has been completed, and many new targeted therapies have been confirmed for their efficacy, which has greatly promoted the development of new drugs, including new antibody therapeutics, small molecule inhibitors, and immune systems. T-cell lymphoma targeted therapy drugs such as therapy and immunomodulators (Figure 1 and Table 2). 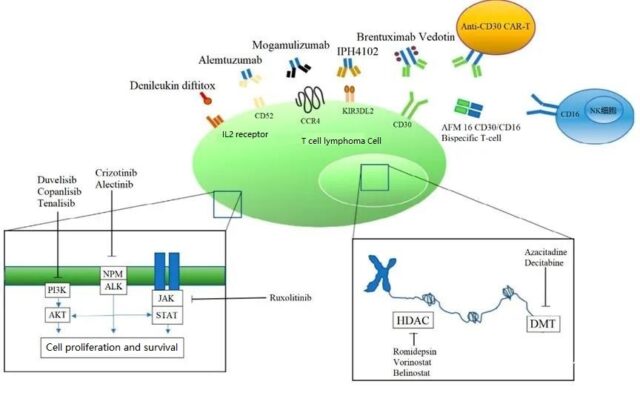 Among them, monoclonal antibody drugs have the advantages of target specificity, accurate killing of tumor cells, and relatively few adverse reactions. They have shown curative effects in some T-cell lymphoma subtypes; and for small molecule inhibitors of targeted signaling pathways, It is possible to detect changes in signal pathway-related genes or protein levels based on clinical studies, and to screen out patients sensitive to these drugs for better treatment. However, the experience of small molecule inhibitors is still relatively limited, and more clinical studies are still needed Combined trials of data and other drugs further support its effectiveness; in terms of immunotherapy and immunomodulators, relevant clinical trials are currently ongoing. Below, the representative drugs in each category are introduced.

BV (Adcetris, Verbutuximab) is a conjugate of anti-CD30 monoclonal antibody and anti-tubulin monomethyl Auristatin E (MMAE), which can make use of the endocytosis of the cell itself to allow small chemical molecules to enter tumor cells The drug effect occurs inside, so as to achieve the purpose of killing tumor cells.

Currently, BV has been approved for the treatment of T-cell lymphoma in many countries. For example, in 2017, the US FDA approved BV to treat adult patients with pcALCL and CD30-expressing MF who had received systemic therapy.

In May 2020, the European Commission (EC) approved the expansion of BV’s conditional marketing authorization to include: combined chemotherapy regimen CHP, first-line treatment of sALCL adult patients with tumors expressing CD30 (CD30 positive); this approval applies to all EU member states, In Norway, Liechtenstein, and Iceland, it is worth mentioning that BV is the first and only targeted drug approved for the first-line treatment of sALCL in decades. Immediately afterwards, the National Medical Products Administration (NMPA) of China also approved BV for the treatment of adult patients with relapsed or refractory sALCL or CD30-positive Hodgkin lymphoma (HL).

In 2018, the FDA approved the marketing of Mogamulizumab to treat adult patients with relapsed or refractory MF or SS who have received at least one systemic therapy. This is the first time the FDA has approved a drug for SS, and it also provides more treatment options for MF patients.

Denileukin diftitox is a fusion protein of interleukin-2 (IL-2) receptor binding site and diphtheria toxin, which specifically binds to the IL-2 receptor on the surface of tumor lymphocytes, and then delivers and releases diphtheria into the cell toxin.

The anti-tumor effect of the drug relies on the intracellular delivery of diphtheria toxin, which can inhibit protein synthesis and induce cell death.

In May 2021, Eisai has launched Remitoro (Denileukin diftitox) intravenous infusion 300μg dosage form in Japan for the treatment of relapsed or refractory PTCL and relapsed or refractory CTCL. According to a survey conducted by the Japanese Ministry of Health, Labour and Welfare (MHLW), it is estimated that there are less than 6,000 PTCL patients and less than 4,000 CTCL patients in Japan. The prognosis and treatment of these patients are not optimistic.

PD-L1 (Programmed death ligand 1) is overexpressed in the microenvironment of T-cell lymphoma and is a reasonable therapeutic target.

Due to the efficacy of PD1 (Programmed death 1) and PD-L1 inhibitors in solid cancer, they have been rapidly developed as a class of drugs and have been tested in a series of hematological malignancies.

Nivolumab (Opdivo) is a PD-1 immune checkpoint inhibitor that can bind to the PD-1 receptor expressed on activated T cells and block the binding of PD-1 to PD-L1/PD-L2, thereby deactivating immunity The PD-1 pathway in the system is an inhibitory signal to the immune system, and one of the manifestations of the inhibitory signal is to interfere with the anti-tumor response.

In the phase I trial of Nivolumab in the treatment of patients with hematological malignancies, 13 cases of MF, 5 cases of PTCL and 5 cases of “other” T-cell lymphoma patients were included. Among them, the research data showed that the ORR was 17%, and no patients got CR, but due to concerns about excessively progressive disease, the subsequent phase II trial was stopped early.