The Self-correction function of genes can resist blood cancer

The Self-correction function of genes can resist blood cancer.

Scientists at Johns Hopkins University have discovered that the self-correction function of genes can resist blood cancer, which is expected to be a major breakthrough in the treatment of blood cancer!

Introduction: Blood cancer is a common malignant tumor disease in life. The incidence of this disease is very small, and the incidence is more in children and young people, so it is a very serious disease. According to the current technology, there is no way for the patient to recover completely. Only continuous chemotherapy diagnosis can alleviate this disease.

Therefore, it is of far-reaching significance to continuously discover new mechanisms of blood cancer and develop new treatment methods. Recently, scientists from Johns Hopkins University in the United States have carried out further research on blood cancer. What enlightenment will their new findings bring to the clinical treatment of leukemia in the future?

Leukemia patients with blood cancer often have infection and fever as the main symptom. Most patients have high white blood cells. Although there are many white blood cells, they are all immature and naive cells, just like some “baby soldiers”. Without the ability to resist the enemy, leukemia patients are easily infected, such as the mouth, throat, ears, nose, anus, skin, etc., which can cause some inflammation changes.

The bacteria with strong virulence can become “septicemia” and endanger life when they enter the blood. . Because leukemia patients produce a large number of immature white blood cells in the bone marrow, and platelet-producing megakaryocytes are significantly reduced, leukemia patients may have skin and mucous membranes, bleeding in multiple tissues and organs, and severe intracranial hemorrhage may occur.

Invasion of leukemia cells into other tissues can be manifested as bone pain, supraperiosteal tumors (tapechromoma), skin nodules, gingival swelling, liver and spleen lymph nodes, etc., and can also be manifested as meningeal leukemia, testicular leukemia, etc., and most patients with leukemia Accompanied by anemia, anemia is aggravated due to bleeding.

Recently, a new study conducted by scientists at Johns Hopkins University has discovered that the genes in the “chromosome cap” can fight gene mutations through self-correcting functions, thereby helping to fight against blood cancer.

They published the results of this research in an article titled “Somatic reversion impacts evolution of myelodysplastic syndromes and acute myeloid leukemia in the short telomere disorders” in the Journal of Clinical Investigation: 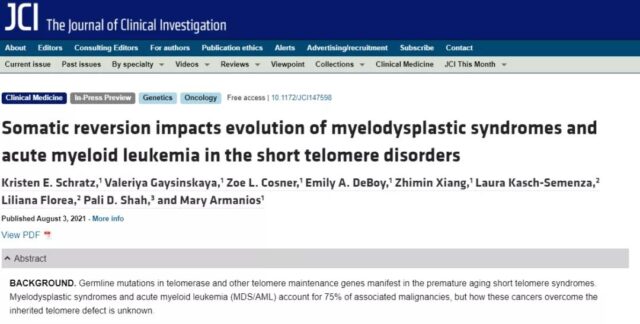 Telomeres are protective caps located at the ends of chromosomes. Some rare diseases can shorten telomeres. For these patients, they have a higher risk of leukemia, myelodysplastic syndrome and other blood cancers. In their research and analysis, this group of scientists discovered several “self-correcting” genetic mutations in the bone marrow. These mutations can play a very important role in helping these patients resist blood cancer.

They found that these mutations can be used as biomarkers to help them determine whether patients with short telomere syndrome are at risk of developing blood cancer.

Mary Armanios, MD, director of the Telomere Center and professor of oncology at the Johns Hopkins University Sidney Cammore Comprehensive Cancer Center, said: “These are the most common cancers among our patients with short telomere syndrome. We know that, to a certain extent, the cells of patients with shortened telomeres have only two possibilities: either become cancerous or maintain a healthy condition.”

Dr. Armanios and her team are suspecting that in areas where the human cell turnover rate is high, such as the bone marrow, there may be a self-correction mechanism that will promote normal cells to become malignant cells. Facts have proved that the self-correction mechanism they discovered will protect cells from becoming cancerous. Since the bone marrow produces more than 300 billion blood cells every day, they suspect that these blood cells can find evidence of cell self-correction in this area of ​​the body, especially inside the spongy bones, where they quickly adapt to the surrounding environment. It plays a vital role in the production of a large number of cells.

Armanios and her team used ultra-deep gene sequencing (repetitive sequencing of parts of the genome to locate mutations that are difficult to find), and observed genetic mutations and self-correction of several genes related to telomeres. Nearly a quarter of patients with short telomere syndrome have these mutations, and some even show multiple gene mutations.

Such a mutation in a gene called TERT produces a key part called telomerase. This enzyme stabilizes telomeres in an intact form. Telomeres are the ends of chromosomes that protect the DNA. By enhancing the production of telomerase and covering the non-working TERT gene copy, they discovered that bone marrow cells seem to be able to correct themselves to avoid cancer.

Armanios explained: “Our findings illustrate the versatility of the bone marrow and other high-replacement areas of cells in the body. These favorable mutations provide the body with better opportunities to protect itself. These findings are useful in screening patients with shortened telomeres. The process is very important so that we can predict who may be free from the risk of cancer.”