The following article is from academic headlines, the author academic gentleman

According to a study published today in the journal Nature, researchers at Stanford University have developed a machine learning method that enables the identification and screening of early-stage lung cancer patients. This method is based on the detection of tumor-derived DNA in blood samples (liquid biopsy), which means that the screening of people at high risk of lung cancer is early and non-invasive.

In traditional lung cancer screening, CT scans are generally recommended for high-risk groups. This mode has been proven to reduce lung cancer-related deaths. However, due to the high cost, few screening items, and concerns about false positives, the use of such screening is not high. Even in the United States, only about 5% of eligible individuals will be screened for lung cancer through a CT scan.

The blood test based on liquid biopsy technology is currently a popular new cancer detection method, but most of the applicable objects of liquid biopsy are often patients with advanced cancer. After all, these groups have a higher level of blood than early-stage patients. Tumor-associated DNA markers. 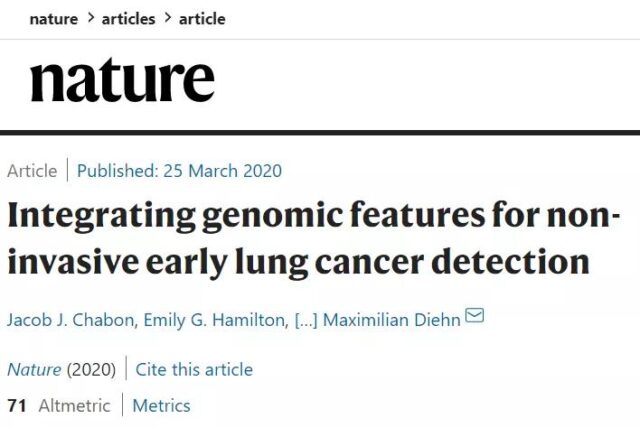 They improved the extraction of DNA and identified changes that are expected to serve as effective disease markers. The researchers used this method to show that although ctDNA is very low in patients with early-stage lung cancer, it is a powerful prognostic indicator.

The researchers then used the data to improve a machine learning method that was used to predict the presence of lung cancer-derived DNA in blood samples. In the initial sample composed of 104 early-stage non-small cell lung cancer patients and 56 matched controls, this method can distinguish early-stage lung cancer patients from risk-matched controls; in another independent verification consisting of 46 cases and 48 controls In the cohort, the researchers confirmed the above results.

In recent years, the performance of cancer liquid biopsy has attracted special attention. As a branch of in vitro diagnostics, liquid biopsy can reduce detection hazards through non-invasive sampling, and is efficient, accurate, and cost-effective.

Even without treatment, cancer cells will continue to divide and die under normal circumstances. When cancer cells die, they release DNA fragments into the blood. Learning to read this information allows clinicians to quickly and non-invasively monitor the presence and size of the tumor, the patient’s response to treatment, and the time the tumor faces treatment. development changes.

The characteristic markers of ctDNA that have been discovered include site mutations, nucleosome occupancy, and differences in methylation modification. Based on the differences in these indicators, early diagnosis of tumors, dynamic monitoring of tumor development and efficacy, drug resistance detection, Recurrence risk assessment and prognosis prediction, etc.

Professor Maximilian Diehn of Stanford University in the United States once said that ctDNA can not only diagnose solid tumors, but also monitor treatment response, detect small residual lesions, and target therapies for drug-resistant mutations. It may be the preferred non-invasive tumor screening method. “One of the exciting events in this field is that circulating tumor DNA can be applied to many different clinical situations.”

The combination of molecular technology and machine learning

Researchers found that although the level of ctDNA in early lung cancer is very low, ctDNA already exists before most patients receive treatment, and its existence has strong prognostic significance.

And unlike previous liquid biopsy studies that tried to develop pan-cancer screening analysis, the researchers focused on non-small cell lung cancer this time, using the unique characteristics of lung cancer to reduce unidentified confounding factors on the test results. Impact.

In addition, unlike previous studies that did not perform validation or used control cohort cross-validation, the calcium study used independent validation to avoid the possibility of over-fitting the model leading to overly optimistic results.

Researchers believe that one potential application of Lung-CLiP is as a preliminary screening for high-risk populations. Positive patients can be further tested and confirmed. This may increase the number of lung cancer screenings each year, thereby saving more lives.

Title of the paper:

Abstract of the paper: 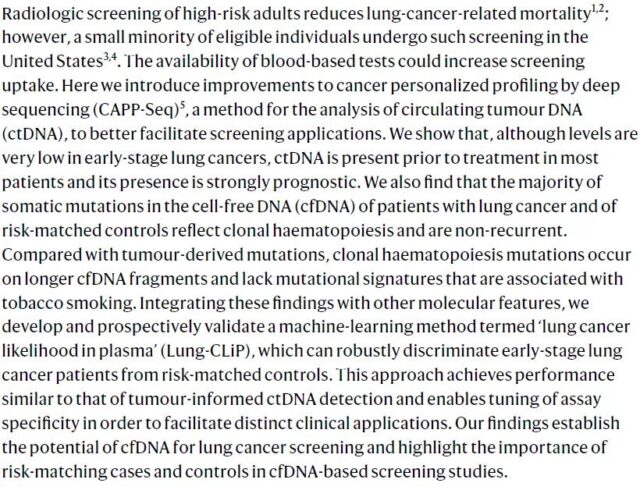