Subvert cognition! Although proton therapy is expensive, it is more “economical” than ordinary radiotherapy in the long-term cost-effectiveness!

In the eyes of many people, the characteristic of radiotherapy can be described as “one rod overturns a boat”. Even normal tissues may be ruthlessly eliminated by radiotherapy.

Especially for tumors surrounding important organs such as the heart, brain, lungs, and gastrointestinal tract, once the radiation dose received by these organs reaches a certain value, some radiation side effects will occur, some are reversible in the short term, and some are irreversible in the long term.

The most common radiation dermatitis, myocardial ischemia, radiation pneumonia, gastrointestinal reactions, impaired cognitive function, vision or hearing impairment, etc., can affect the quality of life, and the more severe ones will affect the therapeutic effect.

So is there an ideal radiotherapy that can kill the tumor without affecting the normal tissues around the tumor?

Proton therapy has always been called the “jewel in the crown” of tumor radiotherapy, and its effect is similar to “directional blasting”.

The purpose of killing tumors. Especially for malignant tumors that grow in important organs such as eyes, liver and kidney, brain, nasopharynx, chest wall, or nearby important organs, the advantages of proton therapy are more obvious. 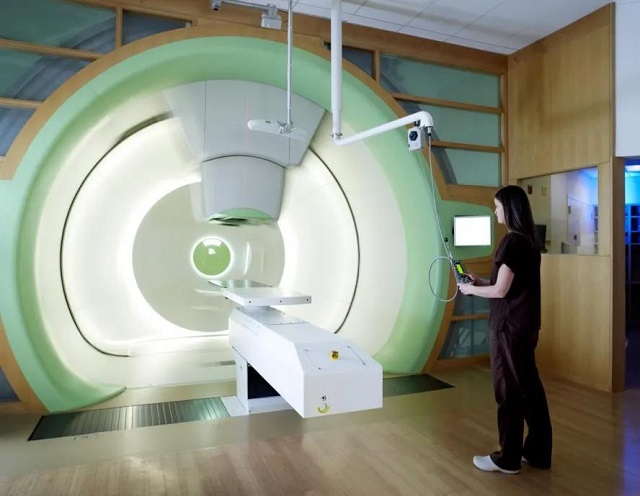 The picture source is the proton therapy instrument of Pennsylvania Medicine

In addition to the obvious advantages of proton therapy for the treatment of the above-mentioned major tumors, on the other hand, the high cost of proton therapy has discouraged many patients and their families.

Indeed, compared with ordinary radiotherapy, the cost of proton therapy is indeed much higher. The main reason is the construction cost, as well as the high cost of central infrastructure and subsequent maintenance.

In fact, the high cost of proton therapy may only be a superficial phenomenon.  The costs of proton therapy seems to be expensive, and from the perspective of long-term health economics, it is indeed a “money-saving” treatment. So how to save money for more “COST-EFFICIENT”?

Because breast cancer patients undergoing traditional photon radiotherapy after surgery, their heart and lungs will inevitably receive low-dose radiation, which will damage the cardiopulmonary function to a certain extent, while proton therapy has minimal damage to the heart and lungs. During the survival period, the number of visits to doctors due to cardiovascular problems or respiratory problems was significantly reduced. Therefore, the total medical expenses of the proton therapy group for 15 years were much lower than that of the conventional radiotherapy group, and the risk of patients dying from heart disease was also significantly reduced. Many commercial insurances in the United States eventually include proton therapy after breast cancer surgery into the insurance coverage.

A study from the Karolinska Institute in Stockholm, Sweden, on whether the medical benefits of proton therapy are sufficient to prove that it has a higher treatment cost than traditional radiotherapy, mainly evaluated the cost-effectiveness of proton therapy in 55-year-old women with left breast cancer.

Medulloblastoma: Proton therapy reduces the total cost by 2.6 times and is the best treatment option for brain tumors

A Swedish study evaluated the cost-effectiveness of proton therapy and photon therapy for medulloblastoma using a Markov model.

At the 2018 PTCOG [International Particle (Proton) Therapy Collaborative Group] annual meeting, clinical researchers and participants shared: comparison of intervention, cost-benefit analysis of the cost of proton therapy for liver cancer, the results found that while ensuring the treatment effect, proton It is more cost-effective to treat liver cancer.

The study found that after one month of treatment, the total length of stay in proton therapy patients was 24 days; among the interventional patients, the length of stay was as high as 166 days.

Head and neck cancer: Proton therapy can reduce the risk of death by 24% and reduce side effects caused by head and neck irradiation

Clinical studies have confirmed that proton radiation can reduce the risk of death by 24% compared to superphoton radiation. The two most disturbing side effects of head and neck irradiation are acute mucositis and acute and chronic xerostomia. Radiation therapy focused on the salivary glands may cause temporary or permanent damage to them. Dry mouth can have a serious negative impact on the quality of life of patients, causing difficulty in tasting, chewing, swallowing, and speaking. It also increases the susceptibility to dental caries and tooth loss, and osteonecrosis is a secondary risk.

An important cost saving is to reduce the need for dentistry, because patients undergoing radiotherapy are usually referred to dentistry before treatment begins, and visits regularly during treatment. The estimated cost reduction is based on the hypothesis that the number of visits for head and neck patients is reduced to the end. In the remaining life cycle, the dental cost saved by head and neck patients is about 3261 euros.

Among the 39 indications that are currently suitable for proton therapy, the most mentioned are patients who are difficult to surgically remove, cannot be surgically removed, or cannot be completely removed by surgery. Usually these patients’ tumors are located in a special location, such as brain and spinal cord tumors, head and neck tumors, lung and mediastinal tumors, digestive system tumors, hepatobiliary pancreatic tumors, bone and soft tissue sarcoma, or the cancer patients are more special, such as pediatric tumors , Elderly cancer patients, etc. The advantages of proton therapy for these difficult and special indications are particularly obvious, and it can also bring a higher quality of life to patients.

Traditional radiotherapy has large side effects and it is difficult to guarantee the quality of life! Proton therapy is given priority to elderly and pediatric cancer patients!

Proton therapy is an anti-cancer weapon, not a “artifact”, it should be treated rationally

In recent years, humans have made many breakthroughs in the field of anti-tumor therapy. Individualized anti-tumor therapy requires the comprehensive use of multiple treatment methods such as surgery, radiotherapy, chemotherapy, molecular targeting, and immunotherapy.

Although the current treatment cost is relatively high, with the popularization of technology, the cost of proton therapy will gradually decrease and benefit the public.

In addition, experts should remind patients that in the era of precision medicine, cancer treatment should undoubtedly be more personalized and not limited to only one therapy or one technology.

Proton therapy cannot “cover all diseases”, but is one of the options for comprehensive cancer treatment.

The comprehensive treatment of patients with surgery, drug therapy, radiotherapy and other methods is the guarantee for patients to obtain a better prognosis.