Two top genetic testing companies performed liquid biopsies on the same group of cancer patients, but the results were quite different

Two top companies did cancer liquid biopsies but results were quite different.

[Hot Discussion] How to achieve more uniform and accurate genetic testing? Shock! Two top genetic testing companies performed liquid biopsies on the same group of cancer patients, but the results were quite different.

Recently, researchers at the European Society of Medical Oncology (ESMO) are calling for more uniform and accurate genetic testing and precision medicine.

They reported on the unfairness of cancer biomarker testing within the EU and the inconsistent guidelines for assessing cancer risk, urged member states to promote standardized testing plans and guidelines, and put forward several implementation recommendations.

Harmonize these guidelines so that you will not receive two or even multiple different advices because of your country of residence or the clinical genetics clinic you visit.

At a time when liquid biopsy is in full swing, two researchers from Johns Hopkins University School of Medicine once published a study in “JAMA Oncology”. They pointed out that the results of tests performed by different institutions are very different. The two authorities Among the 40 patient samples tested by the institution at the same time, except for 6 cases whose test results were deemed invalid, only 12 of the remaining 34 cases had exactly the same test results.

In this study, the two institutions that are “tested” are Guardant Health and Personal Genome Diagnostics. The testing products of the two will respectively sequence 73 genes and partial coding sequences of 64 genes in patients’ blood samples. 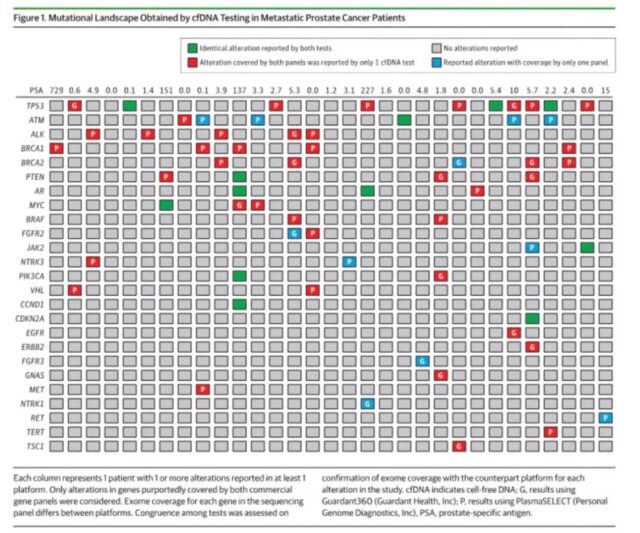 Dr. Daniel F. Hayes of the University of Michigan Comprehensive Cancer Center said: “The research results of the two researchers at the Johns Hopkins University School of Medicine should be given special attention because’the consequences of a bad tumor marker test and the bad It’s the same with drugs. If the accuracy of the test results cannot be guaranteed, it is a very scary thing for patients.”

Recently, researchers from the European Society of Medical Oncology (ESMO) reported on the unfairness of cancer biomarker testing within the European Union and the inconsistent guidelines for assessing cancer risk to urge the advancement of standardized testing plans and guidelines to narrow the gap in precision cancer care .

Nicola Normanno, head of the Cell Biology and Biological Therapy Department of the National Cancer Institute of Italy, introduced a project jointly led by the International Organization for Cancer: International Pathology Quality Network, the European Union of Cancer Patients, and the European Federation of Pharmaceutical Industries and Associations on Saturday. Research. They surveyed 141 laboratory managers in European countries; interviewed 58 laboratory managers, payers, and doctors; interviewed more than 1,600 patients; and reviewed previous studies to identify barriers to genetic testing and determine The quality of the test.

In 10 European countries, the opportunity and quality of patients’ access to other biomarker tests were also evaluated, including HER2, ALK, ROS1, BRAF, KRAS/NRAS, liquid biopsy, etc.

To measure availability, researchers consider the availability of drugs, laboratories, and tests. They measure quality by participating in projects that evaluate test parameters (such as turnaround time and laboratory accreditation).

Normanno said at the ESMO conference: “We found that in most European countries, access to precision medicine is greatly restricted.
Although more countries such as Germany, France, Belgium, Denmark, Austria, Sweden, and Finland have higher chances of single biomarker testing, in some European countries, the chance of patients getting certain single biomarker testing is still limited. “

In most European countries, there are great barriers to obtaining multiple biomarkers and NGS testing. Currently, less than 10% of cancer patients in Europe receive NGS testing.

The quality of inspections in Europe is more average, only Romania and Bulgaria have lower quality. Germany is the only country that has overall access to high-level precision oncology drugs, while Latvia and Lithuania have low access rates.

Researchers have discovered several obstacles faced by European cancer patients in obtaining genetic testing and precision medicines. For example, in many countries, there is a serious delay between the approval of the European Medicines Agency and the supply of medicines. Normanno said there are also regional challenges in terms of the coverage of payers for diagnostic laboratory services and the number of laboratories that can perform NGS.

In the United States, due to regulatory reasons, drugmakers usually launch a biomarker-oriented precision anti-cancer drug and perform paired tests to identify eligible patients. In Europe, the availability of such drugs and paired tests Usually more disconnected. There is a weak link between drug approval and biomarker testing approval, which has led to the slow integration of new biomarkers in medical standards.

However, even in the United States, recent studies have shown that the application of biomarker testing supported by the guidelines in the treatment of non-small cell lung cancer is not ideal. An evaluation of the actual data of more than 3,500 patients with metastatic non-small cell lung cancer who received first-line treatment in community practice in the United States showed that the detection rate of individual biomarkers (such as EGFR, BRAF, ALK, ROS1, and PD-L1) is very high. High, but the detection rate for all five biomarkers was less than 50%, and only 37% received NGS.

The second study presented at the ESMO conference on Saturday explored the differences in breast cancer risk guidelines in several European countries when identifying high-risk women for surveillance. This prospective study involved 123 cancer-free women with a family history of breast or ovarian cancer who underwent NGS to identify mutations in breast cancer-related genes, including BRCA1/2, PALB2, CHEK2, and ATM.

Researchers led by Anja Tüchler, a researcher at the Familial Breast and Ovarian Cancer Center and Comprehensive Cancer Center of the University Hospital of Cologne, calculated the risk score based on family history, genetic test results, polygenic risk scores and non-gene risk factors. Then, they calculated based on the patients’ breast cancer risk and considered whether they met the country’s intensive surveillance guidelines.

Tüchler said in her speech: “This is a significant difference, and we recommend harmonizing these guidelines so that women do not receive two different advices because of the country they live in or the clinical genetics clinic they visit.”

Normanno encourages Europe to be more uniform in testing use and access. The organization that initiated this research is continuing their initiative to make precision medicine and genetic testing more uniform across the EU. These groups are holding national roundtable discussions to determine the needs of each country and address the challenges of drug and testing access. He said: “Our vision is that all cancer patients should receive comprehensive and continuous tumor testing throughout the entire disease process.”

He suggested some short-term measures to improve the chances of obtaining precision treatments, including the approval of drugs and related biomarker testing, the establishment of a national system for evaluating the value of biomarker testing, and a centralized data collection system.

Normanno said that some countries, especially Eastern European countries, need more investment to build their NGS testing capabilities, as well as to establish regional centralized testing laboratories and maintain a dedicated biomarker testing budget. He also hopes to carry out patient education to let patients know that these tests and drugs are available to them.

Normanno said: “We have two equally important pillars: we have access to drugs and we need to obtain biomarker testing. If we do not act on these two at the same time, we will face a contradiction in that we have drugs. But we do not have biomarker testing to determine which patients can benefit from these drugs.”

Two top companies did cancer liquid biopsies but results were quite different.