Salt has the effect of inhibiting tumors by increasing immune cells

Salt has the effect of inhibiting tumors by increasing immune cells.

[Science Sub-Journal] Table salt has the effect of inhibiting tumors? Scientists explain unexpected discoveries for you through mouse experiments!

Cancer is a kind of malignant tumor. Its causes are very complicated. Genes, living environment, lifestyle, etc. are all related to the onset of cancer.

In clinical work, it is not difficult to find that the occurrence of some cancers is closely related to diet, such as esophageal cancer, gastric cancer, liver cancer and so on.

The relationship between dietary habits and cancer has been studied many times in the scientific community for a long time. For example, people who often eat smoked and grilled food, people who often eat moldy and deteriorating food, and people who frequently drink alcohol are more likely to get cancer than ordinary people.

For example, gastric cancer is common in Japan, which often eats raw foods and pickled foods.

The eating habit is mainly fried roasted meat, and the American diet, which is rich in oil and sugar, may be the cause of common colon cancer in the United States.

Recently, a group of scientists wanted to find out the relationship between the level of salt in the diet and cancer tumors, and they launched a study on this.

It is generally believed that salt itself is not a carcinogen, but high-salt foods can destroy the mucous protective layer of normal gastric mucosal mucopolysaccharides, thereby making gastric mucosal epithelial cells exposed and vulnerable to carcinogens.

Therefore, “Salt and Disease” was held in Stockholm, Sweden in 1988. At the international seminar, American scholars reported: “A series of animal experiments and human disease studies have shown that with the increase of sodium intake in the human body, the incidence of gastric cancer, esophageal cancer, and bladder cancer will also increase.”

Under normal living and working conditions, the human body needs about 5g of salt per day. However, recently, a group of scientists from the Institute of Translational Health Science and Technology in the United States discovered that a diet with high salt content unexpectedly has an abnormal benefit.

They found that adding salt to the diet of mice can inhibit the growth of cancer tumors. They published the results of this research in an article titled “High-salt diet mediates interplay between NK cells and gut microbiota to induce potent tumor immunity” in “Science Advances” magazine: 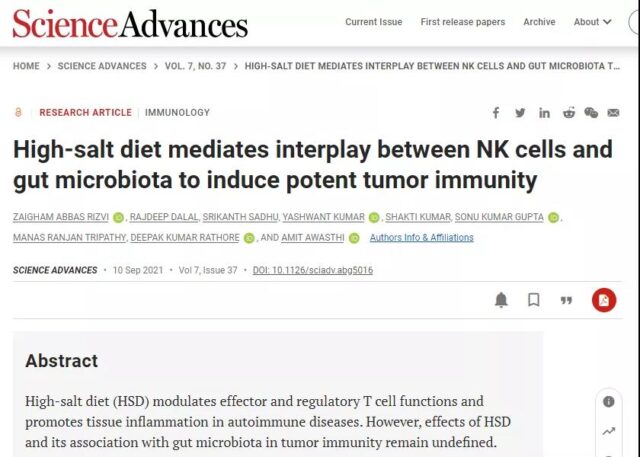 During the feeding process, they compared the two groups of mice to observe and analyze whether the high salt content and the normal salt content of the diet have any difference in the ability of suppressing tumors in these diseased mice, and how much is there? difference.

For many years, doctors have been warning patients to reduce the salt content in their diets and eat less salty foods as much as possible.

The cell wall of bifidobacteria contains certain antigenic components, which can induce the activation of the host immune system, Suppress the tumor or make the host produce immune antibodies to inhibit the adsorption of pathogenic bacteria on the surface of the intestinal mucosa.

At the same time, by eating a high-salt diet, this group of mice will have a stronger ability to inhibit PD-1 protein.

This weakens the host’s anti-infection immune response, resulting in damage to target organs, and ultimately causing persistent viral infections and other related diseases, including tumors in mice. Therefore, once this protein is inhibited, the T cell attack on the tumor will not be blocked, which can prevent the tumor from causing more damage to health.