mRNA is a linear polymer molecule composed of nucleotides, which carries information about various proteins required by cells to make life activities. In theory, mRNA has the potential to treat various diseases, and the success of the COVID-19 vaccine has given people a preliminary experience of the changes that mRNA technology has brought to drug development.

However, the scientific and technical challenges facing the manufacture of mRNA drugs have not yet been fully resolved. We need to allow mRNA to enter target tissues and target cells while avoiding the immune system.

If the immune system is triggered, the resulting response may limit protein production, thereby affecting the therapeutic effect of mRNA drugs.

We also need ribosomes to think that mRNA is naturally produced so that they can accurately read instructions to produce the correct protein. Only when the cells express enough target protein can the desired therapeutic effect be achieved.

In order to solve the above problems, researchers continue to optimize the structure and delivery system of mRNA.

Among them, the 5’end capping and the 3’end poly A tailing help stabilize mRNA molecules, and have a regulatory effect on ribosome binding, translation initiation, and translation termination. This part is usually fixed after optimization. The only thing that needs to be changed is the coding area.

This part is usually designed and optimized using bioinformatics technology according to the different needs of the development of various drugs. 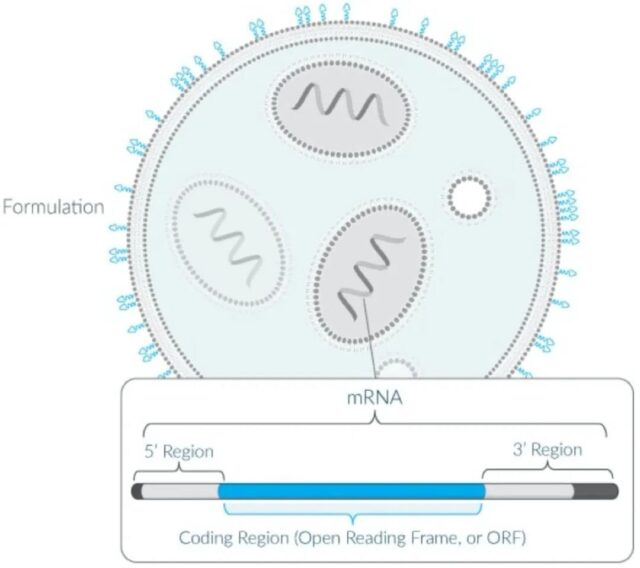 LNP is composed of four components: neutral lipid, cationic lipid, cholesterol, and PEG-lipid to form a sphere, while LPX is a layered cationic lipid structure.

All Moderna products use LNP. In addition to using LNP, Curevac also has a self-developed CVCM delivery system.

Although LNP is currently considered the most ideal delivery system, it still has a certain degree of toxicity.

Therefore, researchers are constantly optimizing LNP to reduce its toxicity or reduce its dosage.

Current Status of Research and Development of mRNA Tumor Drugs

In addition to developing vaccines for infectious diseases, mRNA technology has also made positive progress in the field of oncology drug research and development.

Although Curevac started mRNA research on prostate cancer as early as 2009, it eventually failed in a phase 2 clinical trial and failed to improve OS. Looking back now, it is mainly because Curevac used a complex of naked mRNA and protamine that year, and neither the mRNA modification nor the delivery system technology is mature enough. Currently, mRNA technology is not used in the tumor pipeline disclosed by Curevac.

However, Moderna and Biontech have laid out more pipelines of mRNA oncology drugs. The main technology platforms include the following:

(3) “Intratumoral Immuno-Oncology” and “ITIT” that directly inject the mRNA-encoding complex into the tumor site to avoid off-target toxicity;

(4) Let mRNA drugs directly generate antibodies in the body instead of “rMAB” for recombinant antibodies;

(5) The cytokine is directly encoded by mRNA in the body to replace the “rCK” of recombinant cytokine.

Among them, Biontech uses the FixVac technology platform to challenge prostate cancer again. The mRNA drug code-named BNT112 has been optimized for stability, targeting 5 antigens expressed in prostate cancer, and injected into the body through LPX delivery technology.

mRNA-4157 is Moderna predicts 20 new epitopes that may exist on the patient’s cancer based on the unique characteristics of the patient’s immune system and specific mutations in the cancer.

These new epitopes are expected to trigger the strongest immune response. For the early version of BTN122 (BNT121) in the first phase of the trial, Biontech observed that 9 of 13 patients with metastatic melanoma had stable PFS for up to 41 months. Compared with before treatment, it was observed that treatment The cumulative recurrence rate afterwards also dropped significantly.

Also worth mentioning is the KRAS tumor vaccine. KRAS, a “non-drugable” target, only approved the world’s first KRAS G12C targeted drug Sotorasib in June this year. Drugs for other mutations such as G12V, G13V, G12D, G13D, etc. are still under development.

Moderna and Merck have developed a tumor vaccine that encodes the four most common KRAS mutations and is currently undergoing phase 1 clinical trials.

For example, Biontech and Sanofi jointly developed BNT131, which uses mRNA to encode the cytokines IL-12sc, IL-15sushi, IFNα and GM-CSF. By increasing the concentration of these cytokines in the tumor microenvironment, the immune system can more easily Identify and fight cancer.

Other early projects include, BNT141 encodes an antibody that targets Claudin 18.2. BNT151 encodes human IL-2 or its modified version, designed to stimulate T cells without triggering immune suppression in the tumor microenvironment. BNT152+153 is designed to encode IL-7 and IL-2.

mRNA is a typical technology platform with standard operating procedures and strong scalability. In an ideal state, all the other components can be prepared in advance except for the design of the codeable area.

And with the help of more mature LNP delivery technology, this delivery technology with better effectiveness and safety so far, mRNA can quickly advance into other drug fields. But like the two sides of the coin, the natural liver targeting of LNP has become its limitation.

Clinical research on mRNA tumor drugs will form a batch of new data next year. Once a breakthrough is made, a new chapter in human cancer treatment methods will surely be opened.