According to data from the World Health Organization, more than 1.9 billion adults worldwide are currently overweight, of which 650 million are obese. Obesity has become an epidemic worldwide.

As we all know, long-term obesity can lead to insulin resistance, and then develop into type 2 diabetes and other major diseases, moreover, it also includes depression.

According to statistics, more than one-fifth of the world’s people have experienced depression at some stage in their lives. Symptoms include persistent sadness, despair, sluggishness, sleep disturbance, and loss of appetite.

Some of the factors that cause this extremely debilitating disease cannot be prevented, such as childhood trauma, loss of a loved one, or pressure from the COVID-19 pandemic.

According to the latest data, there are 350 million people suffering from depression worldwide. The prevalence of depression in some countries is 2.1%.

Major depression is the main cause of disability and even death worldwide. Depression is becoming the second largest “killer” of human beings after cancer.

Therefore, it is particularly important to determine the risk factors for the onset of major depression.

On September 23, 2021, in a new study in the American Journal of Psychiatry (IF=18.1), a research team led by Stanford University in the United States and the University of Amsterdam in the Netherlands found that insulin resistance significantly increases the risk of major depression.

Due to excessive intake of high-sugar and high-fat diet, lack of exercise, stress, and lack of sleep, more and more people around the world suffer from obesity and insulin resistance, but many patients often do not know it. Their blood sugar levels will continue to be high, and they will eventually be diagnosed with type 2 diabetes. As we all know, this is a treatable but incurable disease, which may lead to cardiovascular and cerebrovascular diseases, neurological diseases, kidney diseases, amputations and other harmful health consequences.

In this study, the researchers investigated the Dutch Depression and Anxiety Study (NESDA), a multi-site longitudinal study designed to combine biological, behavioral, and psychosocial measures to monitor the causes, processes, and causes of depression and anxiety. as a result of. The cohort involved nearly 3,600 participants, of which 2,981 participants between the ages of 18 and 65 were experiencing depression or anxiety, or had a life-long history of depression or anxiety. Another 601 male and female participants with an average age of 41 years served as the control group. They had never been bothered by depression or anxiety when they were enrolled. The study has been followed up for 9 years and is still ongoing.

The researchers found that all three indicators are positively correlated with an increase in the incidence of depression. In the adjusted analysis, the triglyceride-HDL ratio as a continuous variable was associated with an increased risk of major depression during the 9-year follow-up period. 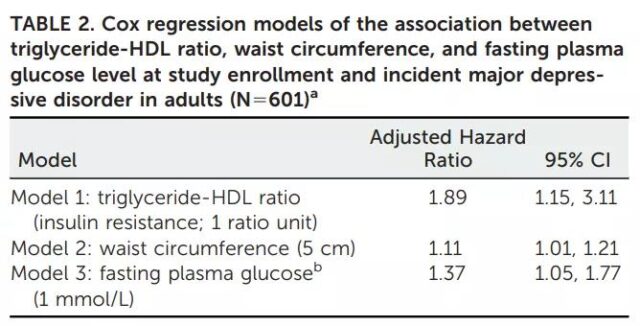 They found that although the number of participants was small and the statistical significance of waist circumference and triglyceride-HDL ratio could not be determined, the results of fasting blood glucose were not only statistically significant (not likely to occur by accident), but also clinically significant . Worryingly, compared with people with normal fasting blood glucose test results for two years, participants who developed prediabetes within the first two years of the study had 2.66 times the risk of major depression at the ninth year of follow-up.

In short: Insulin resistance is an important risk factor for serious problems, including not only type 2 diabetes, but also depression.

The researchers emphasized that it is time to consider the metabolic status of patients with mood disorders. To prevent depression, doctors should check the patient’s insulin sensitivity. These tests are easily implemented in laboratories around the world, and ultimately, can reduce the feasibility of developing patients with major depression.

Therefore, the results of the study indicate that insulin resistance is a very common disease that takes several years before the development of type 2 diabetes. Standard clinical tests using metabolic status can predict the risk of major depression and can be used as an important tool in the treatment and prevention of diseases.