Use stem cells to create embryo-like structures! Can humans “reproduce asexually” in the future?

Further division and cell differentiation produce a hollow structure called a blastocyst on the 5th day of development .

The development of human embryos takes place in the mother’s body, so it is difficult to study. The remaining human embryos donated for research are few, and their use is subject to considerable ethical and legal restrictions.

For these reasons, knowledge about the key developmental steps of embryo formation at the blastocyst stage and its early remodeling after implantation is still largely unknown.

Recently, in a research report published in the international journal Nature Communications , scientists from California Institute of Technology and other institutions have used human stem cells to create embryo-like structures , which are different from natural embryos formed by the combination of sperm and eggs.

The structure is formed by the combination of so-called pluripotent stem cells. Although there are some key differences between these embryo-like structures and real embryos, the technology to create them is essential to answer open questions about human development, which do not require donated embryos.

These pluripotent stem cells were originally isolated from a real human embryo by other researchers and have been kept in a laboratory environment since then. It is worth noting that these cells can still “remember” when supported by suitable environmental conditions. How to assemble into an embryo.

In the current study, researchers aim to develop a series of measures to enable them to rebuild The differentiation and self-assembly of the spatiotemporal lineages of human early development can make use of the reported dual-potency of hEPSCs (human expanded pluripotent stem cells).

The researchers evaluated the multi-differentiation potential of hEPSCs to mimic the fate of early embryonic cells in a 3D medium platform. The results show that the hEPSC-based system established by the researchers can promote the self-assembly of hEPSCs into structures that are similar in morphology to human blastocysts and embryos around implantation, and have a lineage specification to a certain extent.

However, they also found that their cell lineage composition is not perfect, and these cells mainly adopt an intermediate transcription state. 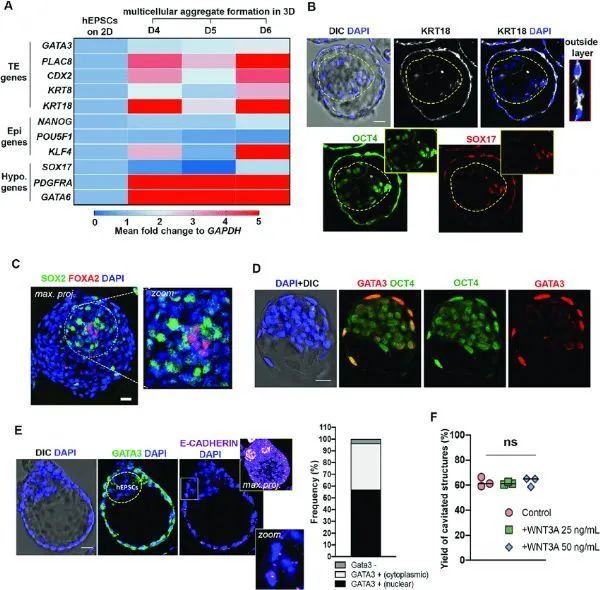 Description of the blastocyst lineage.

In this study, there are still some limitations in the molecular and epigenetic plasticity of hEPSC-derived structures, which will lead to weak activation of important genes (such as GATA3, SOX2, and SOX17 genes), leading to invalid pedigree norms.

Although the structure derived from induced pluripotent stem cells appears to have morphological and transcriptional organization, scientists have questioned the identity of trophectoderm-like cells because they appear to be more similar to the reported amniotic membrane-like cells.

This finding, combined with the findings in this article, the researchers propose that in the model of human embryo development derived from stem cells, there is a certain disconnection between the potential morphology and cell behavior or the identity of the transcriptional cell.

In this study, the researchers demonstrated the ability to produce morphologically similar structures but very different gene expression patterns. This highlights the non-coupling of morphology and gene expression in these models. Of course, these need to be further explored and studied by later researchers. 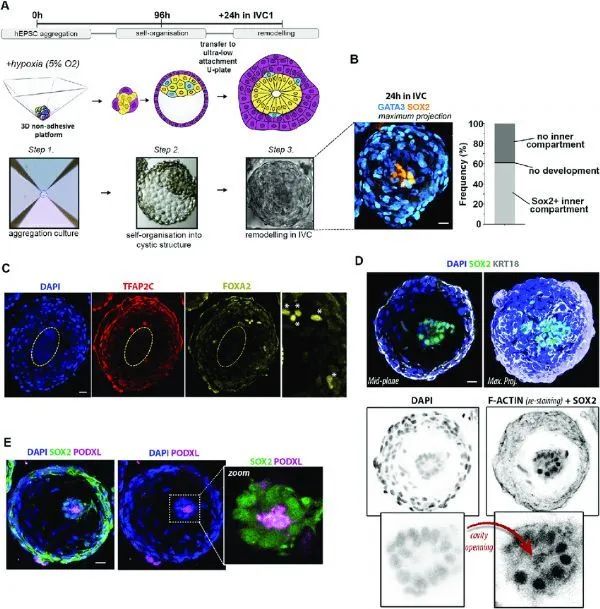 The ability to generate embryo-like structures from stem cells means that additional donated embryos are not required. In addition, such structures can be created in large numbers by researchers. Therefore, the model system can help to understand the development process of early embryos, regardless of Limitations of the limited availability of human embryos.

For example, it may interfere with the expression of specific genes and study the effects of this on the development process. In addition, the system can also be used to understand how different cell components coordinate their development at a very early stage, and The effect of this cell crosstalk on the later developmental stage.

The observed production of inappropriately differentiated cells; nonetheless, these cells are able to produce multicellular structures that exhibit some key morphological features and patterns similar to early human natural embryos.

Therefore, the system proposed by the researchers may provide an alternative approach, which may be applied to a fully functional embryo-like platform in vitro. In summary, the results of this article show that the new type of stem cell platform developed by researchers may provide new clues and in-depth insights for understanding stem cell models of embryonic development.