Ewing sarcoma (EWS) is a malignant tumor of bone or soft tissue, which mainly occurs in children and young people.

It is the second most common primary bone tumor after osteosarcoma.

Traditional treatments, including active neoadjuvant therapy and adjuvant chemotherapy combined with surgery and/or radiotherapy, have greatly improved the long-term survival rate of patients, with the 5-year survival rate exceeding 70%.

However, once the tumor cells metastasize or recur, patients often show a poor prognosis.

In the past ten years, new immunotherapies have emerged one after another, such as immune checkpoint blockers and therapeutic cancer vaccines. Among them, CAR-T therapy is a revolutionary treatment method. It expresses and synthesizes chimeric antigen receptor (CAR) on T cells through genetic engineering. It has become a “routine” method for cancer treatment worldwide.

Recently, CAR-T therapy has also been used for solid tumors, including its application in primary bone tumors. CAR-T therapy may play a superior anti-tumor effect in these EWS patients. 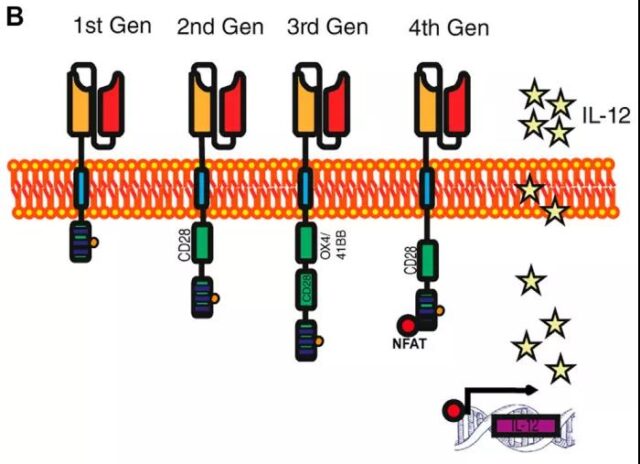 Currently, the targets identified in EWS include VEGFR2, IGF1R, ROR1, GD2, B7-H3 (CD276), EphA2 and NKG2D ligands. These receptors can be used as effective therapeutic targets for CAR-T cells to treat EWS and inhibit metastasis. 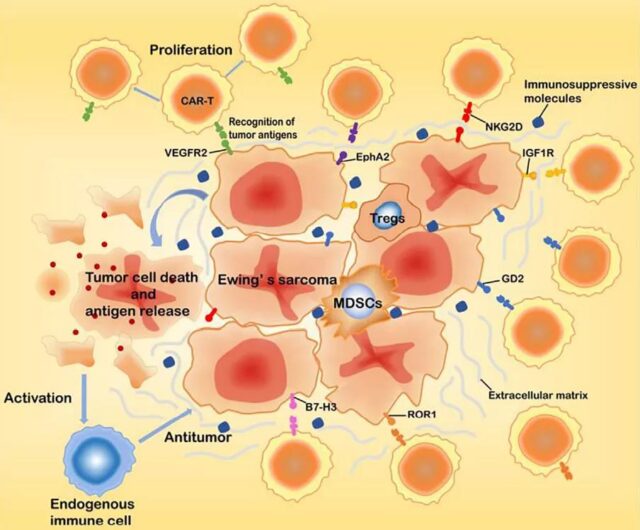 VEGF-mediated signaling pathways have been shown to exist in tumor cells and play a key role in tumorigenesis.

CAR-T cells targeted by VEGFR2 have been used in early clinical trials for metastatic melanoma and epithelial cancer (NCT01218867), but the current results show poor clinical response. Therefore, further research on the effect of VEGF signaling pathway on EWS treatment is very important.

IGF1R is a tetrameric transmembrane receptor tyrosine kinase. The binding of the ligand to the IGF1Rα subunit leads to the autophosphorylation of the β subunit and the recruitment of adaptor proteins, which ultimately leads to the activation of the signal cascade, which in turn promotes proliferation, survival, transformation, metastasis and angiogenesis.

Since IGF1R is expressed in EWS, many experiments use it as an immune target for EWS treatment.

In a phase II study of EWS, researchers found that patients experienced adverse events such as neutropenia and leukopenia after treatment with ganitumab (a fully human anti-IGF1R antibody). According to reports, lymphocytes and monocytes have low cell surface IGF1R expression, which makes them difficult to be recognized by CAR-T cells targeted by IGF1R.

In addition, the off-target toxicity can be solved by changing the affinity of CAR-T cells to target cells or adjusting the therapeutic dose of CAR-T cells. However, before realizing its clinical application, the non-targeted toxicity of IGF1RCAR-T cells should be systematically evaluated.

ROR1 is not expressed in normal human tissues, but is overexpressed in several human malignant tumors, and may be used as a survival factor for tumor cells.

Cell surface ROR1 has been observed in several areas of human parathyroid glands, pancreatic islets, and intestinal tract, and it is especially abundant in gastric antrum and gastric corpus.

Shivani Srivastava et al. designed a logic-gated ROR1CAR-T that can solve the problem of off-target toxicity. In this design, CAR-T cell activity only eliminates tumors that express antigens A and B at the same time.

The synthetic Notch receptor for antigen A can induce the expression of CAR for specific antigen B, and regulate the function of T cells by integrating multiple signals, so that tumor tissues and normal tissues can be more accurately distinguished.

GD2 is a cell surface molecule with a strictly restricted expression pattern and is highly expressed in EWS. Due to the limited distribution of GD2 in normal tissues, immune targeting is safe.

However, other studies have shown that CAR-T cells targeted by GD2 alone cannot eliminate metastatic or in situ injected EWS cells.

Therefore, enhancing the anti-tumor effect of GD2 targeting CAR-T cells is the key to its successful clinical application.

One strategy is to combine GD2 with other feasible targets to construct T cells expressing multiple CARs. Another method can combine GD2-targeted CAR-T cells with immune checkpoint inhibitors to improve efficacy.

B7-H3 is a member of the B7 immunomodulatory protein family and is overexpressed in a variety of solid tumor cells. B7 protein binds to CD28/CTLA-4 family members and acts as a costimulatory signal in T cell activation.

In addition, B7-H3 is overexpressed during pathological angiogenesis, which may make it an attractive target for selective destruction of tumor vasculature.

Robbie GM et al. tried to use B7-H3 targeted CAR-T cells to treat solid tumors in children. They found that more than 90% of children’s sarcomas tested had high expression of B7-H3 and EWS.

Further experiments have shown that CAR-T cells targeted by B7-H3 can eliminate EWS xenografts in vivo, and have a significant survival advantage compared with mouse treatment controls. Therefore, B7-H3 targeting CAR-T cells may be a viable option for the treatment of EWS.

In addition, the combination of B7-H3 targeting CAR-T cells with immune checkpoint inhibitors or traditional chemotherapy drugs seems to be a viable option.

Members of the Eph family are involved in cell transformation, metastasis and angiogenesis. There are two types of Eph receptor ligands: ephrin-A and ephrin-B. EphA2 is overexpressed in a variety of cancers, including breast cancer, melanoma, and prostate cancer.

Related studies have shown that EphA2 is up-regulated in EWS cells and participates in the migration of endothelial cells to tumors to assist tumor angiogenesis.

Studies have shown that CAR-T cells targeted by EphA2 can effectively kill EWS cells in mice and are related to prolonging survival time. However, only a small part of EWS cells express EphA2, and the anti-tumor activity of EphA2CAR-T cells in mice may affect the growth and metastasis of EWS mainly by acting on tumor angiogenesis.

NKG2D is a powerful activation receptor expressed by natural killer (NK) cells and T cells. In recent years, the role of NKG2D and its ligands in EWS has attracted more and more attention.

CAR-T cell therapy is a promising immunotherapy method, and its therapeutic effect on blood and lymphatic system tumors is encouraging. At the same time, people are also full of expectations for CAR-T cell treatment of solid tumors. EWS is an aggressive childhood cancer. CAR-T therapy may play a superior anti-tumor effect in EWS patients. Some CAR-T cell therapy EWS research has made some encouraging progress.

At present, the epitopes used for CAR-T cells mainly include VEGFR2, IGF1R, ROR1, GD2, B7-H3, EphA2 and NKG2D. Although CAR-T cells targeting these targets exhibit anti-tumor activity in in vitro or in vivo preclinical models, these targets also have their limitations, such as off-target toxicity, insufficient action, and low expression. Most studies are still in progress. In the early stage, it is far from clinical application.

To solve the above problems, CAR-T cell therapy should pay attention to the following aspects: first, to find more specific targets for tumors; secondly, when the target is highly expressed in tumor cells and low in normal cells, control The treatment threshold can reduce damage to normal tissues. Third, the affinity between CARs and homologous antigens can be adjusted to achieve targeting.

The obstacles to CAR-T cell therapy, such as tumor penetration, anti-killing, antigen escape, and immunosuppression, can be resolved from the following aspects.

1) CAR-T cells can be designed to express chemokine receptors to recognize the up-regulated chemokines in TME, thereby increasing the infiltration of CAR-T cells.

2) The combination of CAR-T cells with conventional therapies or immune checkpoint inhibitors may be worth exploring.

5) Combining certain drugs can up-regulate the expression of antigens in tumors through epigenetics, and enhance the killing effect of CAR-T cells on tumors.