Antibodies are a key element of protective immunity. Especially in the mucosal immune system, secretory immunoglobulin A (SIgA) is the most abundant antibody isotype, which can prevent infections and protect the mucosal surface from toxins and the environment.

The influence of factors, and can regulate immune homeostasis and coexist peacefully with the human microbiota.

It can regulate immune homeostasis and coexist peacefully with the human microbiota. However, the dark side of immunoglobulin A (IgA) biology can promote the formation of immune complexes and cause pathology, such as IgA nephropathy (IgAN) .

Later, these deposits usually subside, indicating that the main defect of IgAN may not be in the kidney itself but in the IgA system .

In the field of nephrology, since some scholars described IgAN in 1968, people have developed a special interest in IgA. However, the research centered on IgA has not been promoted together, but followed in mucosal immunology and nephrology. Mostly independent pathways.

Therefore, the researchers suggest that strengthening cooperation between the two fields will help to understand IgAN more comprehensively.

The research provides a comprehensive and consistent framework for IgA biology in mucosal tissues and peripheral organs (including kidneys). 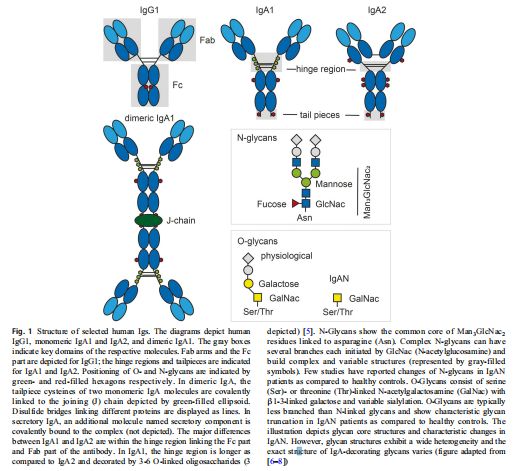 In humans (but not mice), there are two IgA isotypes, IgA1 and IgA2. IgA1 and IgA2 have different representations in different compartments and have different characteristics. The main structural differences between IgA1 and IgA2 It lies in their hinge region, which is a small stretch of loosely structured amino acids that connect the antibody Fab and the crystallizable fragment (Fc).

The shorter length of the hinge region reduces the sensitivity of IgA2 to proteolytic cleavage, which may increase IgA2 in the colonic microbiota. Stability in dense and highly proteolytic environments.

The study found that IgA in patients with IgAN showed abnormal glycosylation, that is, the modification of IgA-linked glycans and galactose was reduced, and there was a lower proportion of β-1,3-galactosidic bonds and sialylation, while IgA More terminal N-acetylgalactosamine (GAlNac) in the hinge is exposed and can be detected by binding to GalNac-specific lectins . 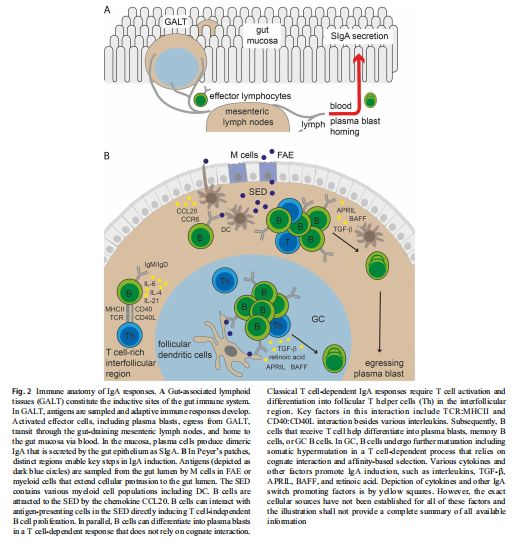 The intestinal immune system includes an effector site and an induction site. The effector site is the intestinal epithelium that mediates the barrier function and transepithelial IgA transport, and then the underlying lamina propria. In addition to other immune cell populations, it also includes IgA-secreting plasma.

In addition, T cells similar to follicular helper T cells are located in SED and promote B cell expansion in the pre-GC stage .

There are still many unknowns in the intestinal IgA system, as is the pathogenesis of IgAN. The basic defects of IgAN seem to be related to changes in the IgA system (rather than the kidney).

However, elevated IgA levels are not pathogenic in themselves, and the properties of serum IgA and IgA-containing immune complexes in patients with IgAN are different from those of ordinary intestines. Road IgA reaction.

In the field of IgAN research, abnormal glycosylation has long been recognized and may drive changes in the physical, chemical and immunological properties of IgA. Abnormal glycosylation may also support the formation of IgA-containing immune complexes and IgA deposits in the kidney.

In the future, mucosa Immunologists may contribute to the understanding of IgAN by helping to identify the anatomical, cellular, and molecular pathways that drive the abnormal IgA response in IgAN.